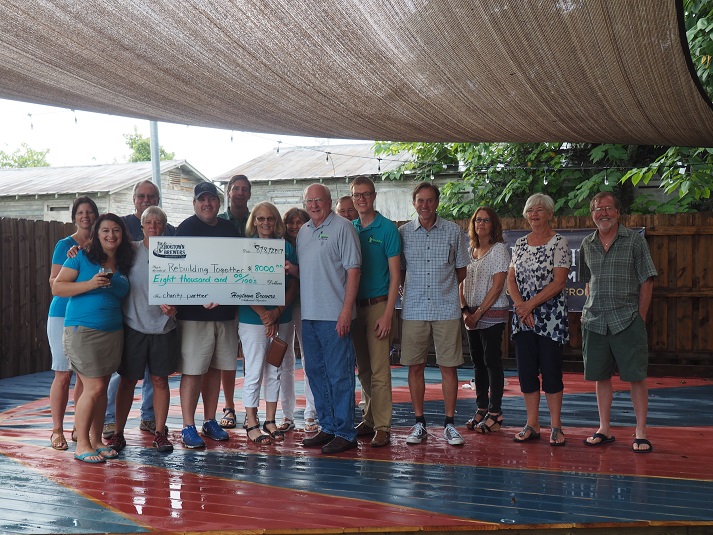 [GAINESVILLE, FL — WEDNESDAY, August 9th, 2017] — Tuesday evening, representatives of the Hogtown Brewers met at First Magnitude Brewery to present an $8,000 check to Rebuilding Together North Central Florida. The nonprofit home brew club with over 200 members has donated over $34,000 to local charities just this year according to club president and “primary fermenter” Steve Brosius. This year they’ve selected six charities to support with funds from the Hogtown Craft Beer Festival which has taken place in April for the past several years. “The Hogtown Brewers, are excited to have the opportunity to count Rebuilding Together North Central Florida among our team of charity partners for 2017,” says Brosius “they continue to be a great fit for us and wholly encompass the philanthropic spirit we pride ourselves upon.” 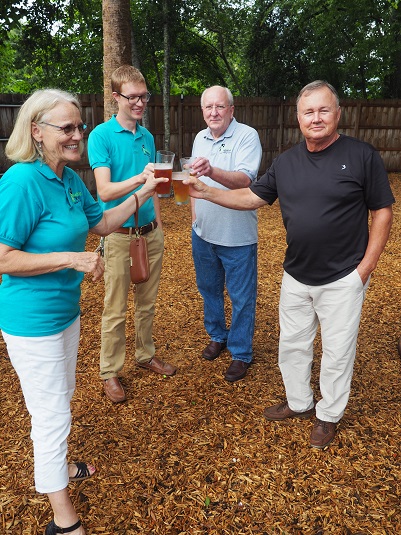 Rebuilding Together North Central Florida (RTNCF) has been a charity partner for the past three consecutive years. “It’s amazing to see the club so involved in this work–not only do they love the art and science of brewing, but they’re truly invested in the causes the money goes to,” says RD Bonner, Executive Director at RTNCF. “They’re a really fun group of people who have found a way to combine their passions for charitable causes with their passions for craft beer–it’s a winning combination.”

One of the major fund-raising events organized by the Hogtown Brewers is the Hogtown Craft Beer Festival, which they’ve been hosting since 2012. The festival brings over 100 local, regional and national breweries to Gainesville promoting over 300 craft beers in April each year. The event has sold out in advance the past three years in a row. Charitable partners help with parking, logistics, setup and cleanup among other things, and proceeds of the festival are used, in part, to support the missions of the charitable organizations. In the past few years, the club has raised and donated over $132,000 to local charities with a variety of missions, and last year was awarded the American Homebrewers Association’s Radegast Homebrew Club-of-the-Year award.

RTNCF’s gift from the club will support its mission of providing critical repairs for local homeowners in need. “Many of the homeowners we work with are elderly, disabled or veterans–all qualify as low-income or below, and all are facing critical health and safety issues,” says Bonner. The organization assesses homes based on a 25 point inspection and engages, trains and oversees volunteers and skilled trades partners to make homes safer and healthier, and to keep homeowners in the homes and communities they know and love. Leaking roofs, broken plumbing fixtures, unstable entryways and faulty electrical systems are all part of the assessment. Anything related to health and safety, is considered a priority.

The two nonprofit groups have a common goal–building community and making Gainesville and the surrounding area a better place. The Hogtown Brewers have been doing just that since 1985. Rebuilding Together’s mission was founded in 2005, and the partnership between the two is now thriving. “Groups like the Hogtown Brewers are really inspiring,” says Bonner “they’re an incredible example of the impact a group of dedicated people can make.” According to Brosius, in addition to the $34,000 raised this year alone, Hogtown Brewers members have been responsible for thousands of volunteer hours in and around Gainesville—an effort he describes as “not too shabby for our merry band of homebrewers!” 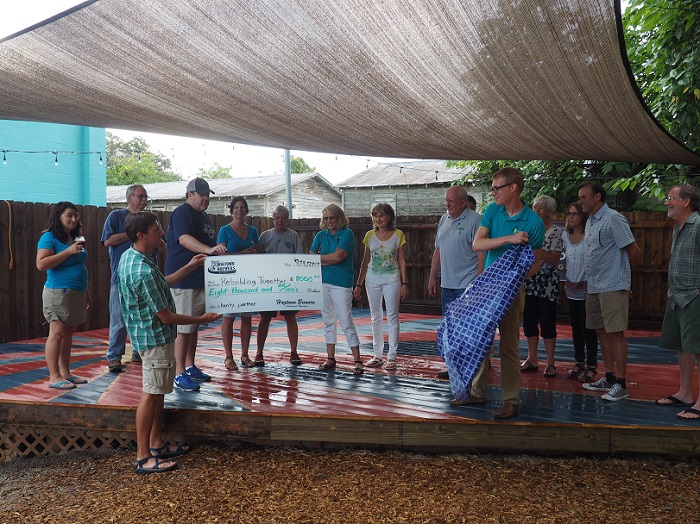 2017 marks the 3rd consecutive year of partnership between the Hogtown Brewers and RTNCF.

2017 marks the sixth year the Hogtown Brewers have held the Hogtown Craft Beer Festival. (Began in 2012)

Hogtown Brewers has distributed more than $132,000 in beer fest funds to local charity partners since our first beer fest. (Over $125,000 in the last 5 years alone)

Members of the Hogtown Brewers are responsible for thousands of volunteer hours over the years.

About Rebuilding Together North Central Florida

Rebuilding Together North Central Florida empowers community members in Alachua County to get involved in rebuilding efforts locally to improve the homes and lives of homeowners in need. Volunteers are trained and overseen by skilled professionals to make critical health and safety modifications to the homes of neighboring low-income, disabled, elderly, and veteran homeowners, helping to keep them safe and dry in the homes and communities where they’ve lived for years. http://rebuildingtogetherncf.org

About the Hogtown Brewers

The Hogtown Brewers is Gainesville’s local non-profit homebrew club (winner of the 2016 AHA Radegast Homebrew Club of the Year)! Since 1985, the Hogtown Brewers have been promoting brewing and craft beer through classes, educational brewing events, competitions, beer/food pairings, and other activities.

The club currently has over 200 members which include multiple professional brewers, numerous medal winners in state and regional competitions, plus a healthy gaggle of BJCP homebrew competition judges (including master and national level judges). Members are from a diverse range of backgrounds and professions, but all share a passion for brewing, beer science, and all things craft beer.   www.hogtownbrewers.org