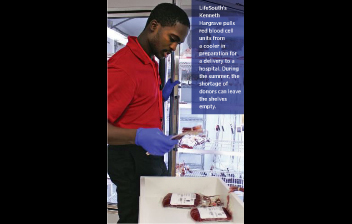 The arrival of summer brings relief for Gainesville’s road warriors who face cross-town commutes, but for LifeSouth Community Blood Centers, the summertime slowdown means the battle is about to begin.

“Basically, at LifeSouth we have two seasons: when school is in session and when it’s not,” said LifeSouth North Florida District Director Dustin Scott. “When high schools are out and student numbers drop at the University of Florida and Santa Fe, we see our donations take a dive as well.”

Like blood centers across the country, blood shortages are often a summertime fact of life. But for LifeSouth, particularly in the Gainesville area, it’s even tougher.

Blood drives on college and high school campuses account for 22 percent of LifeSouth donations in Florida, Georgia and Alabama, but in Gainesville, it’s closer to 42 percent.

“Believe me, I like seeing the drop in traffic on the streets as much as anyone, until I look at the bare spaces on the shelves in our coolers,” Scott said.

While the old rock song declared, “There ain’t no cure for the summertime blues,” Scott says that’s not the case in Gainesville.

“While we feel summer slowdown shock more acutely, we do have one advantage. We have many, many donors who are there for us, no matter what the season,” he said.

There are donors like Jerry Flunker of Rochelle, for example, who make the trip into Gainesville every two weeks to donate platelets. In 2013, he hit the 50-gallon donation milestone.

Flunker says he picked up the donation habit from his mom when he was growing up in St. Louis and brought it to Gainesville with him, usually celebrating each donation with Fig Newtons and Oreos.

“I’m just trying to keep it going,” he said.

Greg Ahrens is another of the regulars. Now 52, he says he was about 40 when he gave for the first time. He explained that he was working on a job at Regal Cinemas with his business, Ahrens Complete Lawn Care, when he saw the bloodmobile parked out front and decided to give it a try.

“It went really well. It wasn’t as scary as I thought it would be,” he said. “I found it was some way for me to give back.”

And after that first donation, he learned he had O-negative blood, making him a universal donor. His blood is also the type newborn babies can use.

“I felt like then it was even more important for me to give,” he said.

So, he stops in just about every eight weeks to donate. He never turns down one of the fresh-baked cookies.

“I have a big sweet tooth,” he said with a laugh.

Businesses also come to the rescue, Scott said, because they’ll host blood drives in the summer, when the parking lots at area high schools are empty. Businesses see it as a way to help the community, and those who participate seem to enjoy the opportunity.

“Employees don’t leave town for the summer, so they are a huge help,” Scott said.

It’s also a time when LifeSouth makes a special pitch to those who only give occasionally.

“Giving just once or twice more during the year could help us prevent shortages before they happen,” Scott said.