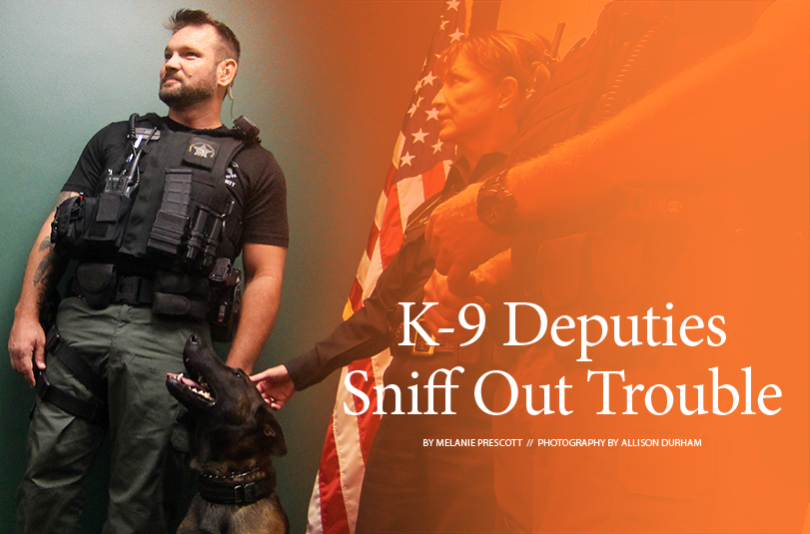 The Alachua County Sheriff’s Office bought two K-9 deputies to sniff out firearms and ammunition in response to the upsurge of gun violence, notably after the Parkland shooting.

Students across Alachua County welcomed the new school year with fresh backpacks and sharpened pencils, but also with two wagging tails. Gauge, a 2-year-old German Shepherd, and Ruger, a 2-year-old Belgian Malinois, are the newest additions to the K-9 Unit at the Alachua County Sheriff’s Office. As part of the gun-free-zone approach, Gauge and Ruger will help keep every school in Alachua County safer by sniffing out firearms and ammunition.

“The idea came from one of the school resource sergeants who had a meeting with all the sergeants shortly after the Parkland shooting,” said Alachua County Sheriff Sadie Darnell at a meet and greet for the agency’s newest K-9 deputies in August. “It’s very innovative, especially for our area. The utility of the dogs is well-known for a number of purposes, but this is the first time we’ve had gun-detection dogs.”

After completing basic obedience, Gauge and Ruger underwent 240 hours of detection school for certification. The dogs were trained to link the smell of a firearm with the reward of a treat.

Gauge and Ruger will fill vacant deputy positions on school campuses in addition to sniffing out firearms in announced and unannounced searches around the county, which extends to more than 900 square miles in coverage.

“The utility of the dogs is well-known for a number of purposes, but this is the first time we’ve had gun-detection dogs.”

“The use of dogs in this capacity is a result of this heightened violence that we are seeing everywhere,” said Sgt. Brett Rhodenizer, an ASO public information officer. “There will be days that they are [the assigned] deputies of that school.”

Like any object, firearms have a distinct odor, and a dog’s sense of smell is up to 100,000 times better than people, according to a PBS online article. In training, the repetition of odor-sit-reward allows each dog to sniff out firearms despite a difference in make or model, or even distance between the dog and a firearm.

“If you have a supreme pizza in front of you, you smell a pizza,” said Art Forgey, an ASO public information officer. “Those dogs, with their scent capacity, can smell each and every ingredient on that pizza and pick out what it is.”

In March, Deputy Tony Tell welcomed the bond between man and man’s best friend as Ruger’s handler. As a school resource deputy in Fort Clarke last year, Tell hadn’t worked with a dog before Ruger.

“I jumped on it because it’s a good way to deter gun violence,” Tell said. “Also, it shows a good, strong presence that we are there to try and prevent guns from being on school [campuses].” 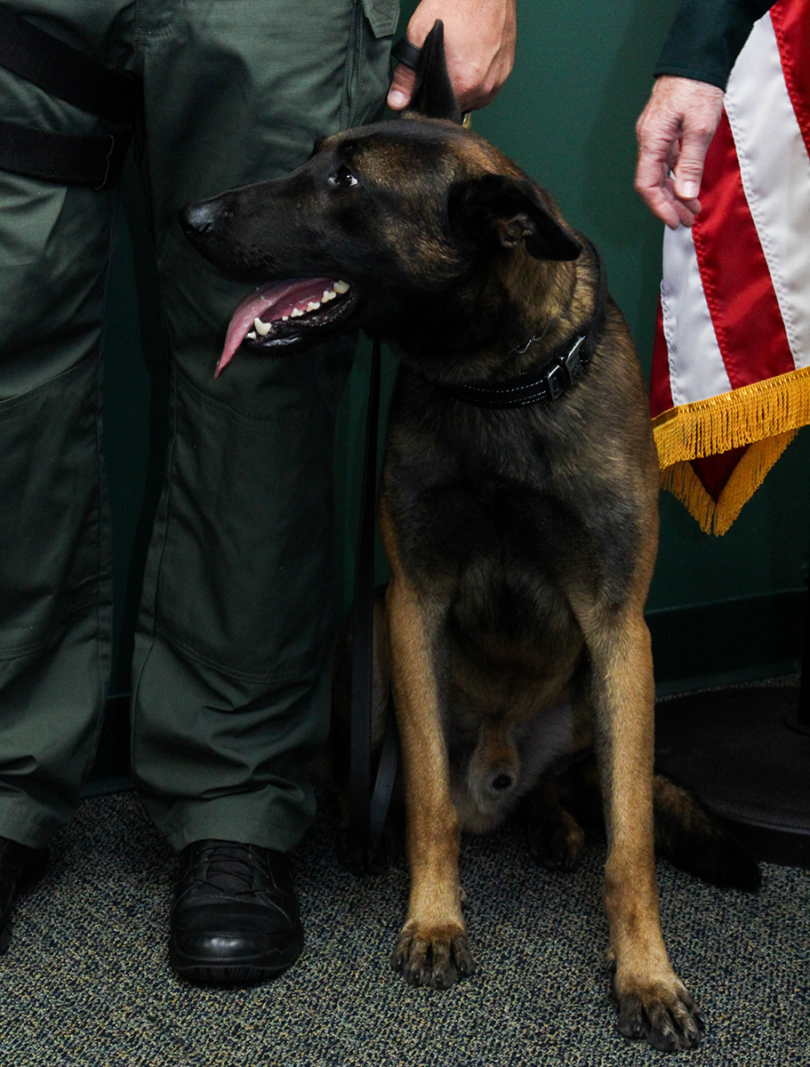 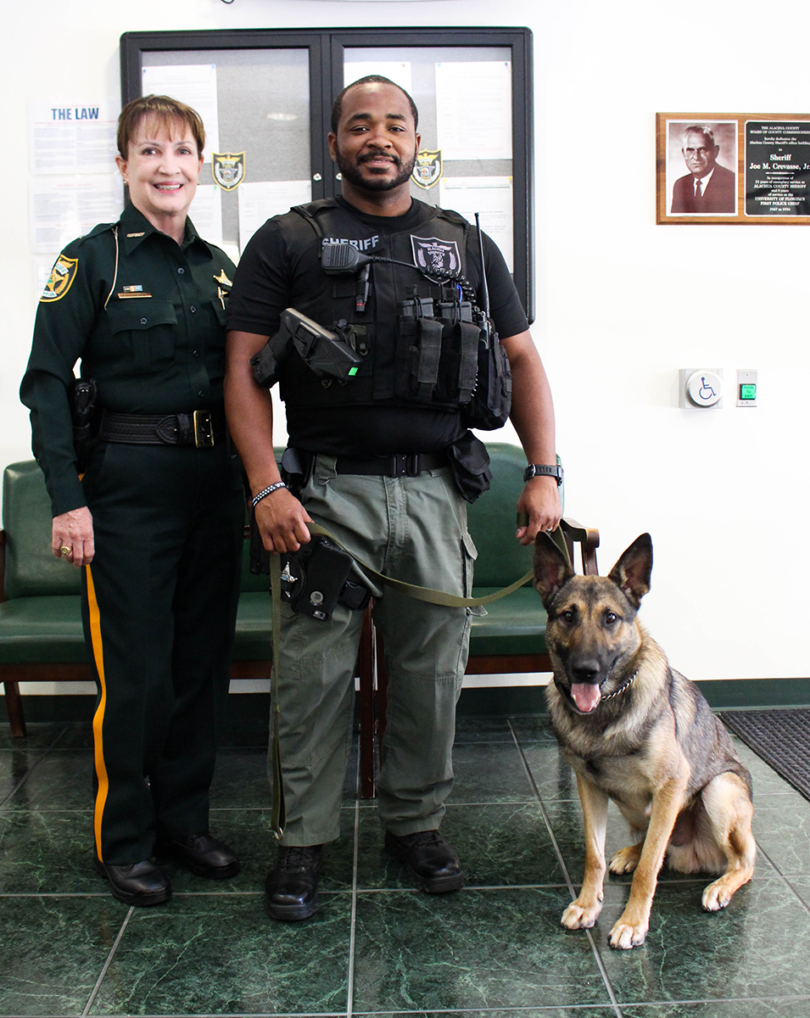 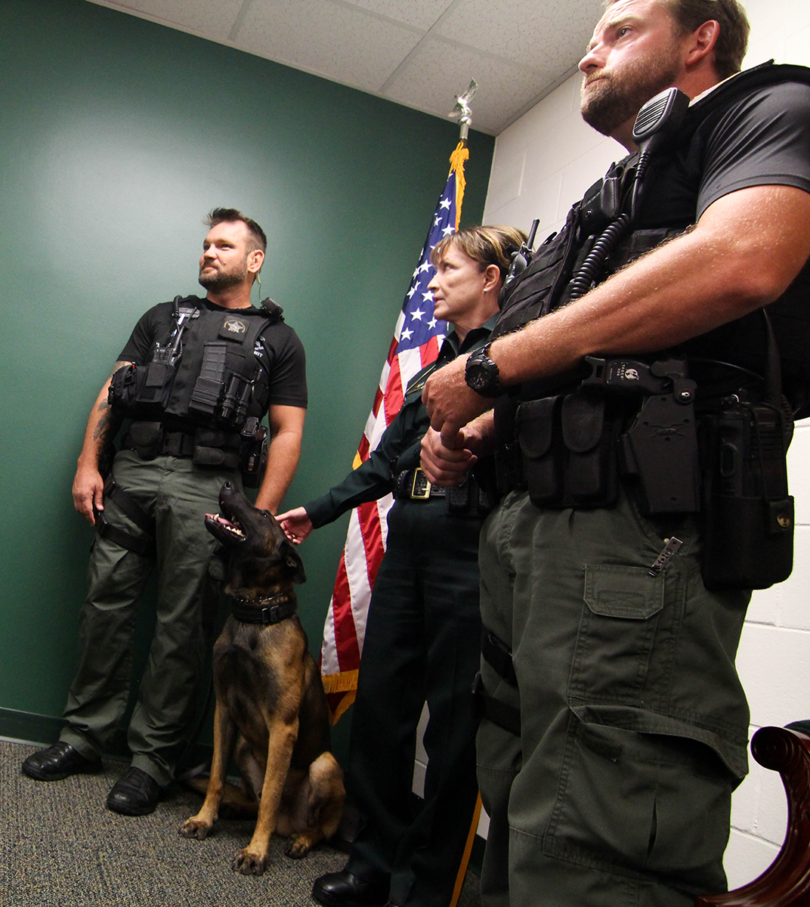 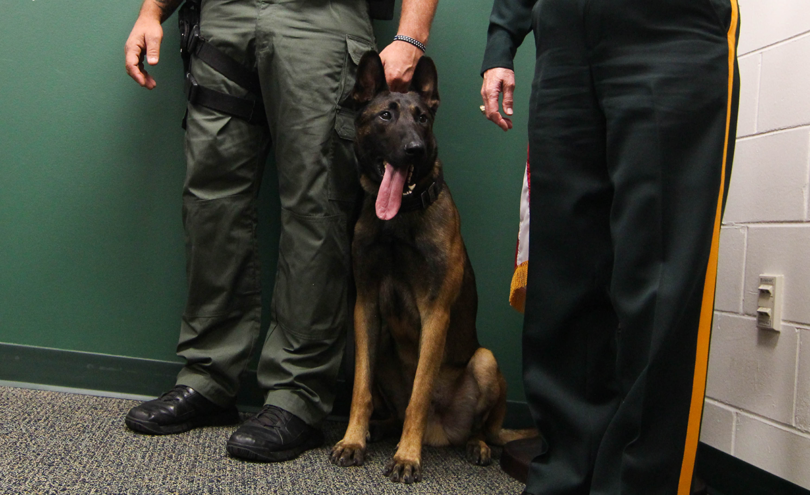 Deputy Craig Smith was familiar with K-9 handling through patrol work before he became Gauge’s handler in April. However, the high energy of a young German Shepherd revealed just how difficult K-9 handling can be.

“It’s been a roller coaster,” Smith said. “A lot of good, some stressful, but I wouldn’t trade it for anything.”

Gauge and Ruger, along with their handlers, will work 12-hour shifts to sniff out firearms and ammunition in schools and around Alachua County. Shifts will include perimeter searches around each school as well as fence-line searches, locker searches and backpack searches, said K-9 Unit Sgt. Mike Hurlocker.

“Training a dog is the same, no matter if it’s patrol, looking for narcotics or guns,” Hurlocker said. “It’s the same philosophy and concept; You just add a different item that the dog has to locate.”

ASO purchased the dogs, untrained, from a local vendor for $6,500 each. German Shepherds and Belgian Malinois are the most common breeds used for law enforcement and are often mistaken for each other. Like Ruger, the Belgian Malinois is smaller in frame with a notable black mask and ears. As single-purpose dogs, Gauge and Ruger will assist their handlers in the detection of firearms and ammunition only.

Following the Parkland shooting, Florida schools and communities are honing their safety procedures to prevent such gun violence from happening again.

“It’s very responsive and allows us to buy so much safety,” Rhodenizer said. “We have a tip, we respond with the dogs and we are able to confirm or deny, then it’s back to normal.”

As K-9 deputies, Gauge and Ruger wear a star like the one on their handlers’ badge.

“When they are working, they have that on because they are a deputy,” Forgey said. “When the collar goes on, he knows it’s time to go to work.”