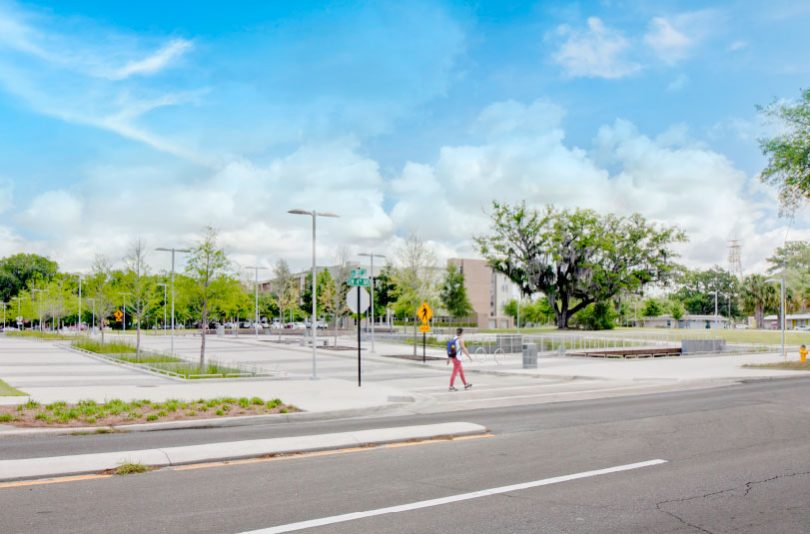 Gainesville has commenced a period of urban revitalization that is bringing significant changes to the city’s landscape. All throughout town, buildings and public spaces are undergoing development and restoration in efforts to enhance the city’s curb appeal and establish a more competitive economy. 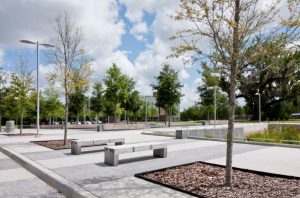 Among the many regions being developed is Innovation Square, the dynamic 12-block business district between the university campus and downtown. Beginning with the addition of the Florida Innovation Hub in 2011, the area began to spring to life with new, state-of-the-art office buildings as a mix of public and private shareholders worked together to establish the framework of a “live, work, play” environment that allows businesses and the community to coexist in a sustainable, adaptable region.

Thus far, development in the zone has largely been offices and general infrastructure improvements, shifting the focus almost solely to the district’s “work” side. Recent proposals, however, hint that the “live” and “play” elements of the paradigm — vital components for fostering a sense of community among Gainesville residents — are soon to be on the forefront of the region’s development efforts.

In 2015, the University of Florida began working with the city and local developers to establish the foundation of its Strategic Development Plan: One Gainesville, which outlines the course of the city’s expansion over the next 50 years. One of the most fundamental aspects of the plan is further urbanization of the Innovation Square area in hopes of better uniting the university with the community.

With the implementation of this program likely to occur over the next several years, the corridor is expected to become a lively region filled with restaurants, retailers, condominiums and public spaces in addition to the many office buildings already located in the area.

Community leaders hope that as Innovation Square evolves into a mixed-use district, community camaraderie will strengthen as the residents surrounding the area will gain more opportunities and spaces to congregate for celebrations, recreational activities and leisure time. These types of areas that cultivate socialization are critical, as they can allow the town’s diverse population to unite on common ground and help establish the identity of the city.

The area’s ongoing progression has already begun to create the framework for the development of a tight-knit community. The addition and renovation of public gathering areas, together with the surrounding array of new and existing eateries, are starting to define the culture of Innovation Square and paint a picture of the region’s budding future.

The formerly desolate Innovation Square, largely characterized by barren parking lots and derelict structures, has seen vast changes to its infrastructure over the past several years. Several gathering areas, including parks, squares and plazas all connected by newly paved, pedestrian-friendly streets, were either added or rehabilitated into spaces that make Innovation Square more livable.

One of these public areas is Innovation Square’s now trademark plaza and roadway system at the intersection of Southwest 9th Street and Southwest 3rd Avenue, which has transformed into an ideal space for community gatherings and events. Whether it be art exhibitions, trade shows, career showcases, food truck fairs or Saturday morning yoga, the region’s central location and appealing scenery give it the potential to host a variety of local events that would allow the community to come together and repurpose an underutilized space.

Just across the street is the storm water park off of Southwest 5th Avenue, which was revamped in 2014. The park was freshly landscaped and now features a floating fountain in its pond, new benches and new lighting on the existing exercise trail, making it an ideal place for students and residents of nearby neighborhoods to jog or enjoy the natural scenery. 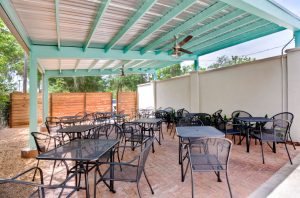 While it is predicted that the Innovation Square’s expansion will bring additional restaurants to the area, its small yet growing repertoire of existing eateries has been essential to the region’s urbanization and gives the once-bland region an increasing sense of character. One of the most popular, the unique and soulful Reggae Shack Café, was recently renovated and now features a patio where diners can relax outside while enjoying Jamaican cuisine.

Its new neighbor, Karma Cream, moved just a few blocks down from its former location to accommodate growing demand and now offers a selection of organic beer in addition to its organic coffee and ice cream. Felipe’s Taqueria also joined the region in 2016 with Latin cocktails and Mexican food in a quick-casual setting, perfect for nearby professionals enjoying a Friday happy hour with coworkers.

The Future of Innovation Square 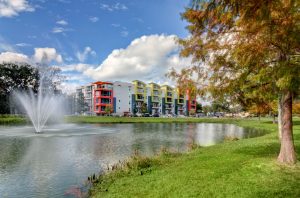 Currently, several projects are underway in the region. Off of Southwest 2nd Avenue, a four-story office building is planned to break ground in 2018. Nearby on Southwest 4th Avenue, Trimark Properties is developing Ingenuity, a four-story luxury office building that will be completed in January 2018. The Cascades Luxury Apartments are also under construction by the developer on Southwest 4th Avenue. The 67-unit luxury community will be the second in a series of apartments in Gainesville recently built around Innovation Square by Trimark, which is also formulating plans to build upscale condominiums for the professionals working in the business district.

The future of Innovation Square is promising, though much of it is yet to be developed. Within the next few years, however, the corridor is intended to become an interactive, social region that will bridge the gap between the surrounding area’s unique assortment of residents and contribute to the overall invigoration of Gainesville.