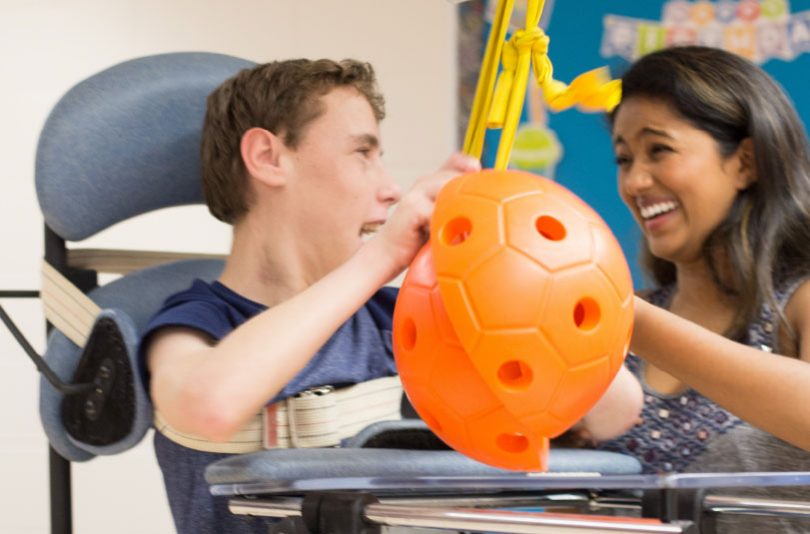 To call Dr. Suma Metla a physical therapist is to tell half the story. Maybe less.

Metla works with special-needs students throughout the Alachua County school system, and on any given day, her job requires her to be an artist, inventor, diviner, architect, advisor, traveler, planner and troubleshooter, in addition to conducting half a dozen or more physical therapy sessions.

Each student she works with has an IEP — individualized education plan — and Metla is intimately involved with crafting it, advising the teachers how best to follow it and coordinating with families to make the transition from home to school life as smooth as possible.

“Everything is tailored to the specific child,” Metla said.

As lead physical therapist for the entire school system, Metla has enormous responsibilities. When shes not in her office or in one of the specialized classrooms at the Sidney Lanier Center, she travels to three or more schools per day, staying up to date on hundreds of students, tracking their progress, finding solutions to their problems and squeezing money and supplies sometimes seemingly out of thin air.

“I have to do a lot of begging and a lot of groveling,” Metla said with a smile. “A lot of the equipment is old, and I’m trying to update it, but its expensive. One specialized wheel chair could cost $2,500.”

On a recent day at Sidney Lanier, Metla roamed the halls with Nicholas Wozniak, a student with cerebral palsy. Wozniak is a wheelchair user and is largely nonverbal.

However, Metla spends so much time with him, she was able to understand when he said, “I’m a good guy,” in response to her greeting.

In August 2016, Wozniak had hip dysplasia surgery to help straighten his hips and allow him limited mobility in a walker. Metla showed his teacher the best way to transport him from wheelchair to walker, and she also had a track system installed on the ceiling of his classroom. Several apparatuses fit in the track system, including a harness that allows Wozniak to sit upright and makes it easier for the teacher to move him around the room, depending on where he needs to be for the days lesson. This track system has helped other students as well.

“We have a student who was crying a lot, but she is nonverbal, so we couldn’t tell what was going on,” Metla said. “I put her in a swing in her classroom, and she immediately stopped crying. Sometimes the job can be hard — physically and mentally, when you’re not seeing progress, or if you see a decline — but moments like that make it worthwhile.”

Metla’s dedication to helping people with disabilities began early in life. When she was in the fifth grade, a teacher suggested she get involved with the Special Olympics. The experience set her on the path she still follows.

“I just had a connection with them,” Metla said. “We worked well together.”

While attending the University of Florida, Metla worked with the Inclusive Fitness and Unified Sports program (IFUS), an organization that pairs volunteers with special-needs students to help them exercise and participate in sports. She earned a doctorate in physical therapy from Florida International University and returned to Gainesville to work with students in the Alachua County school system. (She was recently recruited by a special-needs school in Hawaii and plans to be living there by the time of this publication.) 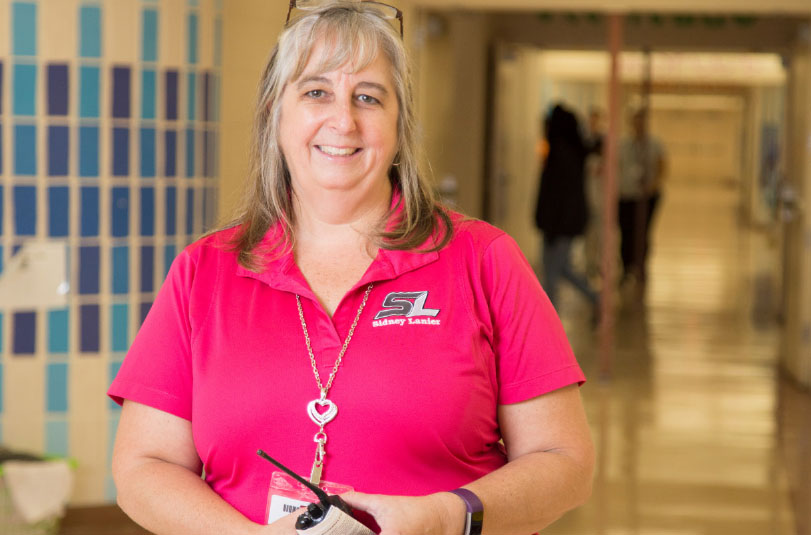 Sidney Lanier is different from all other schools in Alachua — it is a center school, which means it only sees students with special needs. Until recent years, students with disabilities had no other choice but to attend such a school. However, in the last decade or so, there has been a movement to include disabled students as much as possible in mainstream schools.

“People ask why a school like this is still open,” said Assistant Principal Kim Dotts-Hoehnle. “The parents keep this place open. They want their kids to go here, because here the kids can play on the basketball team, have a prom and do many things they couldn’t do at a mainstream school.”

“Sidney Lanier is a special type of school,” Miller said. “That used to be more the tradition, but the push has been away from that for a long time. What keeps Sidney Lanier going is the parents. There are parents who want that type of school for their child, but from the federal government, through the state government, on down to Alachua County, what we prefer is for students to be integrated as much as possible, have access to the general curriculum and be in classes with their same-age peers.”

Miller works with kindergarten through fifth grade students at what she called traditional elementary schools. Her job at these schools is to integrate special-needs students into the general curriculum as much as possible.

“We want to make sure they have whatever they need to make them as independent as possible,” Miller said. “If I have a student in a wheelchair, I want to make sure they have a bathroom, the equipment they need to move around. If I have a student who can’t control the movement of their limbs, then I might be working with them on an eye-gaze communication system or computer. They might be nonverbal, but they can use a computer with their eye gaze, so they can participate in classroom discussion, write a paper or anything else they need to do. Or, if they’re verbal, they can talk into it and the computer will type it out.” 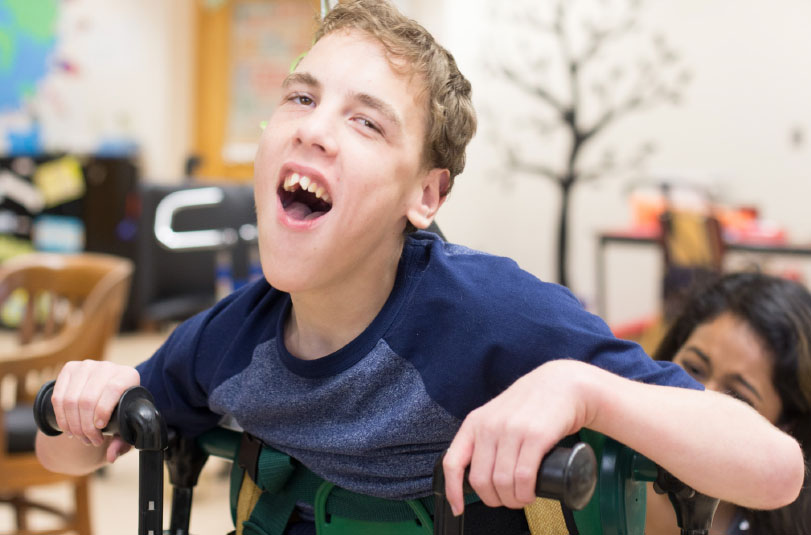 Like Metla, Miller spends a great deal of time making sure each student receives help tailored to his or her needs.

“It is amazing how much effort and time everyone puts into helping these kids,” Miller said. “I’ve seen very positive results. I think the very best scenario usually is when the team working with the student at the school and the parents are all working together, which usually happens. You see kids do amazing things that you wouldn’t have thought possible.”

Miller believes that technology has driven the push to integrate special-needs students into mainstream classrooms.

“Technology has helped people with disabilities immeasurably,” she said. “It has allowed them a voice. It is amazing, and it’s always improving. There’s been a long history of just hiding them away. We still have a long way to go, but it is changing.”

Even though Sidney Lanier is a restricted school, Metla is quick to point out the ways in which it also strives to integrate the students into the community. She mentions “transition kids,” students who go to UF twice a week and participate in a fitness program, as well as the job opportunities open to students who can fill them. One Sidney Lanier student works at Reggae Shack; others have found jobs at Publix or serving in high-school cafeterias. In addition, Dalys Avila, a teacher at Sidney Lanier, takes students out for community-based instruction.

“We take them into the community and have them practice using money, following rules, communicating,” Avila said. “We teach them life skills.”

Metla also noted that the school puts great emphasis on teaching students how to fend for themselves in a world that is not always kind.

“We teach them how to advocate for themselves,” she said. “We want them to be independent but also know when and how to ask for help.” 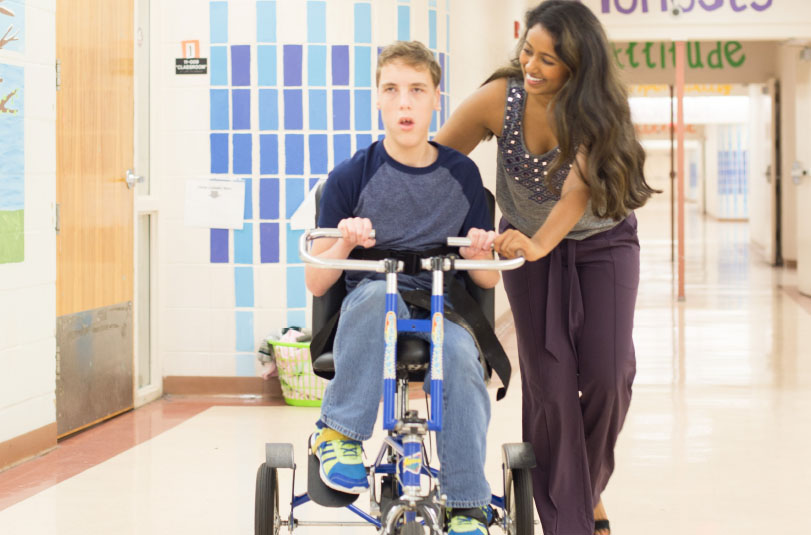 Physical Therapist Suma Metla helps Nicholas Wozniak exercise by steering his bicycle in the hall of the Sidney Lanier Center.

The school recently received a major grant from UF. Metla said they plan to use the money to refurbish the playground and create a sensory room. When asked to describe a sensory room, Metla said they are still designing it. The goal of the sensory room is to create a therapeutic space that can help students with sensory-processing disorders. This is the part of the job that requires her to be an inventor, artist and architect.

Metla seems well-suited for the challenge. Whether discussing the track system in a classroom, showing off equipment in the gym locker room or explaining the various contraptions in her office, a palpable sense of love for her job shines through. She flits around with genuine excitement, often putting herself in an apparatus to show how it works. She brags about the basketball team — They were pretty competitive this year — and stops students and teachers in the hallway for a few words of encouragement or just to check in.

All three women — Metla, Miller and Dotts-Hoehnle — have a clear sense of mission. This sense allows them to serve the students in Alachua who need them most; it allows them to show up every day to a job that can be challenging, frustrating and even heartbreaking, and do their work with compassion. As Dotts-Hoehnle explained, “There’s a certain type of person who can do this job. Many of us have a deeper reason for doing it. My dad became disabled when I was in middle school, and I’d spend time with him at doctor appointments or therapy sessions, and I’d see the way he was treated, almost like he wasn’t a person. I wanted to change that.”

“I can’t change the world,” she added. “But I can change some small part of it.”