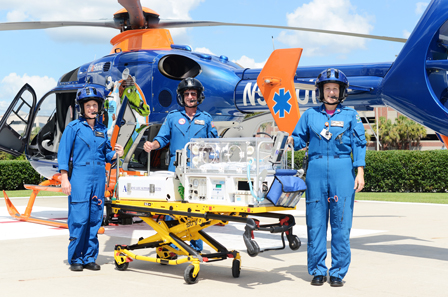 Kimber Norwood and her husband, Christopher, were expecting a routine obstetrician visit on Aug. 22, especially since they had received a normal ultrasound result just two days prior. However, this wasn’t the case. Their baby’s heartbeat was slow, and she showed no signs of breathing; her diaphragm was not moving. They were rushed to UF Health Shands Hospital for an emergency cesarean section.

Kimber and Christopher Norwood with their daughter, Arya

Arya Norwood was born at 36 weeks four days gestational age with no vital signs. She was resuscitated, but doctors didn’t know how long her brain had been deprived of oxygen, so Michael Weiss, M.D., immediately administered cooling blanket therapy. Arya’s body temperature was intentionally lowered for 72 hours to stave off brain damage, and she was then rewarmed for seven hours.

Dr. Weiss was the first person her parents met after delivering Arya. He explained the cooling therapy technique and continued to run tests and provide progress reports to the Norwoods throughout the process.

“Dr. Weiss was not only very informative and helpful throughout this trying time, he was also extremely caring,” Kimber said.

Now, Arya is gaining weight and is developing well – just like other infants her age. Dr. Weiss and his talented team at UF Health Pediatrics Neonatal Brain Team Clinic will continue to meet with her to monitor her progress. But, for now, she’s being spoiled under the protective eyes of her parents and three older brothers.

Arya suffered from hypoxic-ischemic encephalopathy. Hypoxic-ischemic encephalopathy affects three to 10 out of 1,000 births. Babies are perfectly healthy until something happens to the placenta, or umbilical cord, which provides oxygen and glucose until birth. A lack of oxygen and glucose can cause brain injury.  At birth, doctors rapidly recognize babies with potential brain injury because they do not have a normal neurologic exam and require help breathing. The only effective therapy for these babies is to cool their body temperatures for 72 hours within six hours of birth. Since not all babies are born at UF Health Shands, the neonatal transport team has the ability to take a cooling device with them on the transport so that they can begin the process while transporting the babies to the hospital. Currently, this is the only program that is using the device during air and ground transports. Only one in eight babies who receive the cooling therapy will have a normal outcome. Currently, doctors are unable to predict which babies will respond to the therapy.

Research to Touch the Future

A team of researchers at the University of Florida is trying to develop a bedside blood test to identify which babies will respond well and have a normal outcome. This will allow the babies who will not have normal outcomes to undergo other therapies to help improve their outcomes. The team is led by Dr. Weiss and Dr. Martha Douglas-Escobar, M.D. Currently, they are using innovative biomarkers of brain injury. These biomarkers are proteins which originate in the brain and are found in the blood only after brain injury.

Dr. Weiss and Dr. Douglas-Escobar are collaborating with Banyan Biomarkers, Inc., (www.banyanbio.com). Banyan is a local biotechnology company spun off from the University of Florida. The company has developed novel biomarkers of brain injury and the technology to rapidly and accurately measure their levels in blood. The collaboration at Banyan is being led by Dr. Ronald Hayes, founder and president, as well as director of Banyan Laboratories.

The group is also collaborating with Dr. Shelley Heaton, a noted neuropsychologist, to study if the biomarkers obtained shortly after delivery can predict long-term neurologic outcomes. In a recent pilot study funded by the Children’s Miracle Network, blood samples from babies with HIE who were cooled were analyzed for two proteins of brain injury, GFAP and UCH-L1. The results demonstrated that levels of the proteins are elevated in the blood of patients who do not respond to the cooling therapy in the initial hours after birth. The development of these rapid bedside tests will allow doctors in the future to tell which babies respond to the cooling therapy and more accurately predict long-term outcomes.  Hopefully, by using this technique, the team will be able to identify babies who will not have an outcome like Arya and develop therapies to help these babies.