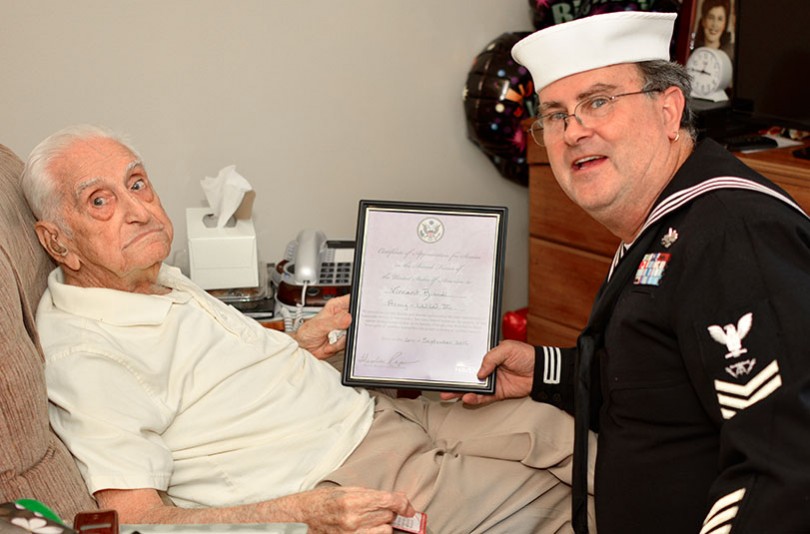 Haven Hospice Veteran Volunteer Ted Rodgers recognizes Vincent Biondi for his service in the United States Army during World War II. Biondi was drafted in October, 1941 at the age of 24 and attended basic training at Fort Belvoir in Virginia. He served in both the European Theatre and the African and Middle East Theatre during the war. “After basic training, the Army sent me to Fort Knox, Kentucky, to train with the Combat Engineers. I learned about tanks and other mobile devices. Everything was becoming mobile at that time.” Originally from Bronx, New York, Biondi retired to Miami and later moved to Gainesville to be with his daughter, Aileen Young.

Ted Rogers somberly walks into the Haven Hospice care center after a full day of work, clothed in his original dress blue uniform from his service in the U.S. Navy.

He walks slowly to a patient’s room and knocks gently on the door. The family answers and invites him in. He talks with them for a few minutes before turning to the man in the bed. Rogers stands at attention and begins to read the certificate in his hands aloud.

The man in the bed opens his eyes and focuses intently on Rogers, never taking his eyes off the sailor while he reads. Rogers bends forward, gently placing a Veteran pin on the man’s chest.

“This pin is a small token of gratitude and our tribute to you for your military service to America,” Rogers says.

Rogers straightens his posture and slowly salutes, eyes trained on his fellow veteran. The room is silent as tears of pride fall from the faces of family present. The man in his uniform steps back and stands at ease. The expression on his face says it all. 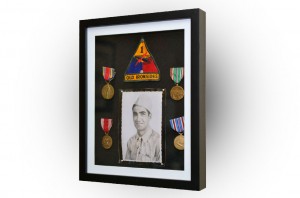 In 2015, Haven Hospice cared for more than 877 veterans, approximately 295 of whom chose to receive recognition for their service from veteran Hospice volunteers. Whether through these ceremonies, volunteer and staff education or community partnerships, Haven continuously strives to live out its mission of honoring life by providing comfort, care and compassion to those they serve — including and most especially U.S. veterans.

“A lot of these guys, especially the Vietnam guys did their job and they never got a thank you,” said Rogers, a retired U.S. Navy First Class Petty Officer. “When I walk into the room in my dress blues and say thank you, it usually makes them proud. It makes them proud of who they are and what they’ve done.”

“Ted and Brenna are remarkable volunteers,” said Jayna Mason, Haven Hospice Gainesville Volunteer Coordinator. “Whenever a request is sent from staff for a Veteran Recognition, they are there. Brenna lays out Ted’s blues, makes arrangements with family and caregivers and completes the paperwork needed to process the visit.”

The couple started performing Veteran Pinning Ceremonies to honor veteran patients in December 2015. After a Haven veteran volunteer presents a veteran patient with a Certificate of Appreciation and a thank you card signed by the staff, they proceed to pin and salute the veteran patient and their family. After a pinning ceremony, patients often share stories about their service, many of which their families never knew, which can be a healing experience.

“I really enjoy sitting with these veterans and their families and hearing the stories that they have to tell,” said Ted, who spent 20 years after his military service as a fire control-man before retiring in August, 2002. “I think it is really important for these veterans to share their stories, because if they don’t, a piece of history is lost.”

The couple plan to continue recognizing as many veteran patients as they can, and Brenna is interested in expanding her role with Haven. “I’m looking forward to getting involved in the Pet Peace of Mind program with Haven,” said Brenna. “However, I plan to continue helping my husband with the veteran pinning ceremony. It is so rewarding to spend time with these heroes, and I’m honored that they share their stories with Ted and me.”

If you are a veteran and interested in recognizing fellow veterans who are Haven Hospice patients in the Gainesville area, please contact Volunteer Coordinator Jayna Mason at 352-378-2121.