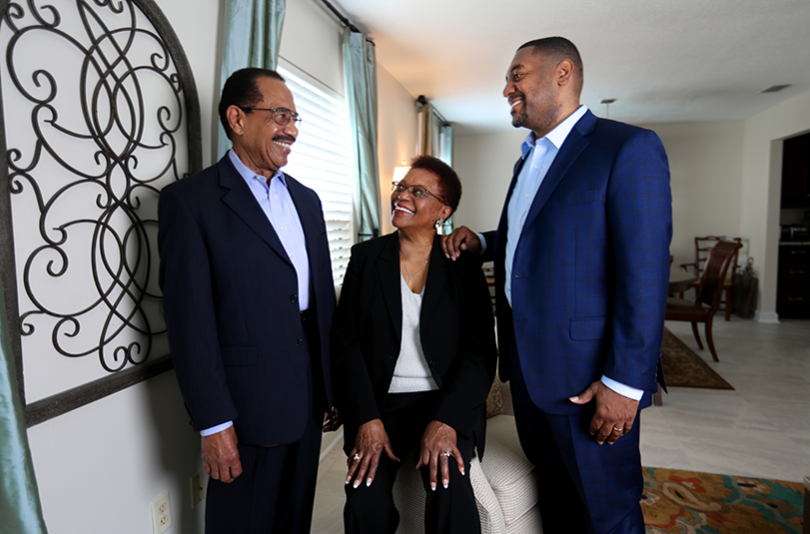 Despite the twists and turns, the starts and stops, the big city and corporate exposure, the Bradleys were destined to be in Gainesville and in the family business.

Greg Bradley has discovered there’s no place like home.

It took a few years of moving back and forth, and a bit of soul searching, but in the end, he heard a calling to come home.

The Bradley family has recently returned to Gainesville where Greg has gotten back into the family business by buying the Allstate agency his father had started. But this is not a simple story of a father passing on the family business to his son. It’s a story of community service, of coming home and leaving again, and of finding lost opportunity, nearly two decades in the making.

A LEGACY OF SERVICE

Greg’s parents, Winston and Sandra, were actively involved in the Gainesville community, ordained ministers, and together ran a successful Allstate insurance agency.

Winston was born and raised in Gainesville. He moved away to attend college and later served in the US Air Force. After he was discharged in the late 1960s, he moved to Brevard county and worked at the Kennedy Space Center for nine years, where he met the woman that would become his wife, Sandra.

In 1978, Winston returned home with his wife and two children and began his career with Allstate, eventually opening his own agency in the early 1980s, which he ran with Sandra’s assistance.

Winston was an active civic leader and served on several boards in town.

“I was on the Santa Fe College board for 20 years and the Gainesville Housing Authority for 12 years,” he said.

He also ran (unsuccessfully) for the School Board – twice. He said he wanted to see more vocational training.

“It was a learning experience,” Winston said. “Some of the things I really wanted to do, still have not been done.”

Greg said his parent’s dedication to public service didn’t seem unusual and they didn’t push their agenda on him or his sister Kim.

“I never looked at them serving the community. I looked at them as mom and dad,” Greg said. “Seeing them in action was more impactful than what they said.”

“Aside from accepting Jesus as my Lord and Savior, going to FAMU was the best decision I’ve ever made,” Greg said.

Indeed, it was at FAMU that Greg met his future wife, Keysha, a native of Gretna, Fl. Greg was friends with her roommate and would send messages to Keysha through his friend. Two years later they started dating.

Upon graduating from FAMU, Greg moved to California to work in Silicon Valley. He quickly realized that California was a very different world compared to Gainesville. Greg heard new languages, experienced new cultures and was challenged to expand his way of thinking. This is where Greg learned that the world was big and had a lot to offer.

This was also when Greg had a choice to return to Gainesville to take on the family business or to follow his own career path. During a summer visit home in 1999, Greg was presented an opportunity. As Winston started contemplating retirement, he tried to recruit his son to take over the agency. He asked Greg, “Do you want it or not?”

Greg told his father he wanted to wait at least five years, to get his master’s degree and work in Atlanta as a management consultant.

“At that point I was 25,” Greg said, “and I just couldn’t see myself going back to Gainesville then.”

His father told him, “It’s now or never.”

Greg said it would have to be never.

“I was dead-set on going to graduate school and becoming a strategy consultant,” he said.

“I would’ve really liked to hand off the business to Gregory, but it was his decision to follow another career path,” Winston said. “I sold the business to a friend of mine, Mickey Rawls.”

True to his plan, Greg pursued his MBA at the University of Virginia (Darden School of Business) with a full scholarship. He married his college sweetheart, Keysha. They settled in Atlanta, where Greg was having a successful consulting career, and started a family.

At 31, Greg was working as a consultant for Deloitte when he was involved in a leadership program designed to help top-performers grow into stronger leaders through specific development efforts and executive coaching.

“In that program I realized we are really good at climbing ladders, but we don’t really ask if we are climbing the right ladders. As I finished that program, I had this desire on the inside of me that I can’t explain, to come back to Gainesville and take the things I’d learned and help,” he said. “I felt like it was a call from God to move back to Gainesville.” 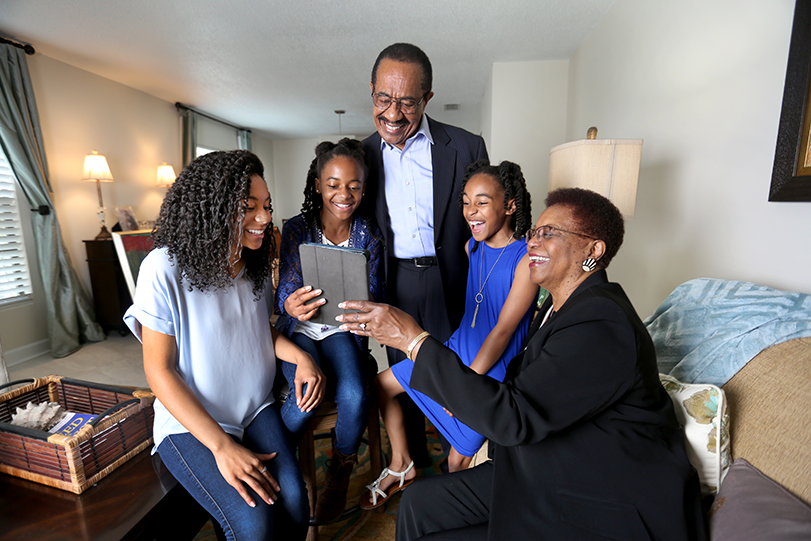 In the summer of 2007, the Bradleys – Greg, Keysha, and 3-year-old Nia – came back home where Greg became finance manager for the Community Redevelopment Agency (CRA).

“I loved the work, because the CRA had the mission of eliminating blight, and I got to learn a lot about public/private partnerships,” he said. “It was hard work, but very fulfilling.”

“I got into it as soon as I moved to Gainesville,” he said. “I had found out about it while in Atlanta, and that is what helped me get a better understanding of the Gainesville community more quickly, since I was coming back in after not being here since high school.”

While his time in Gainesville working for the CRA was a great experience, after three years he was feeling the itch to do more. And, as a business person, Greg wanted the opportunity to be back in the business community.

“I had walked away from the business world,” Greg said. “I felt like I needed to be back.”

As the family business was no longer an option, and Greg was unsuccessful in finding the right job in Gainesville, the Bradleys had to make a tough decision.

“I went against my heart for home and instead followed my head for business,” he said.

The Bradleys, now a family of five, made the move back to Atlanta where Greg started consulting again, accepting an offer with North Highland, a global consulting firm.

Greg thrived in his consulting career, becoming the first black executive at his firm. He led the account of one of the firm’s top three clients and was the Global Head of the company’s Transformation services. His community involvement included serving on the board of Meals on Wheels Atlanta, serving as a Deacon in his church, and ultimately going through Leadership Atlanta.

At North Highland, Greg became good friends with one of the managing directors, Anne Game. As Game spent time working alongside him on an executive team, she saw how he was a strategic thinker who cared for everyone around him. She said he created and led an African-American employee group and participated in awareness sessions at North Highland, which encouraged Game to explore unconscious bias and stereotypes.

“He would hold people accountable, produce great results,” Game said. “He’s good at making the people around him better. He’s a challenger.”

She noticed he was a man of faith, which drove him to help those around him and to share inventive ideas with his clients.

For the Bradleys things were good.

Yet, still something was missing.

“In my heart, I knew that I had walked away from what the Lord put on our hearts,” Greg said. “We were comfortable, but still unfulfilled.” 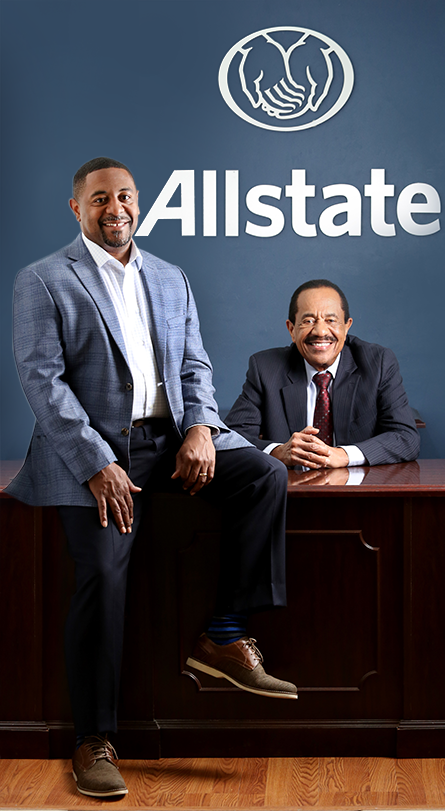 During his time in Leadership Atlanta, a guest speaker asked their class five questions: “Who am I? Why am I here? What is my gift? What does it feel like to be a problem? What do I need to do to die a good death?”

Greg had an epiphany.

“I knew at that point, that in order to answer that last question, I had to come back to Gainesville and do what God put on my heart to do,” he said. “God gives us gifts; our job is to give those gifts back to help people.”

Before Greg had even mentioned anything to Keysha about making yet another move, she too came to that same conclusion, telling him they needed to do what God had called them to do and return to Gainesville. Greg began making plans to purchase his dad’s old agency.

The final move back to Gainesville began.

Now the Bradley family is finally home, and Greg has taken on the family business after a nearly 20-year journey. But Greg will tell you he did not come back home to only sell insurance; Allstate merely became the vehicle for him to partner with people as an advisor to help them protect the things they most care about. Returning to Gainesville provides the opportunity for him to pour his expertise and experience back into the community he loves.

Keysha continues her career as a middle-school guidance counselor with the Alachua County School system.

They are the proud parents of three daughters, Nia (14), Olivia (11) and Alexis (9) who are being raised in the community where Greg grew up. And Winston and Sandra are close by and can easily spend time with their granddaughters.

“We enjoy them,” Winston said. “If I’d known grandkids were so much fun I would have had them first.”

And as for Greg taking on the family business?

“We are elated about it,” Winston said. “To see him back in a business of his own is wonderful. When you’re working for yourself, the sky is the limit.”

They Bradleys have come full circle, returning to a community they love, with hopes of continuing a family legacy of serving Gainesville through business and civic involvement and leadership.

“We are very excited to be back in Gainesville,” he said. “While I am truly grateful for the experience and exposure the last 20 years have brought, there is just no place like home.”