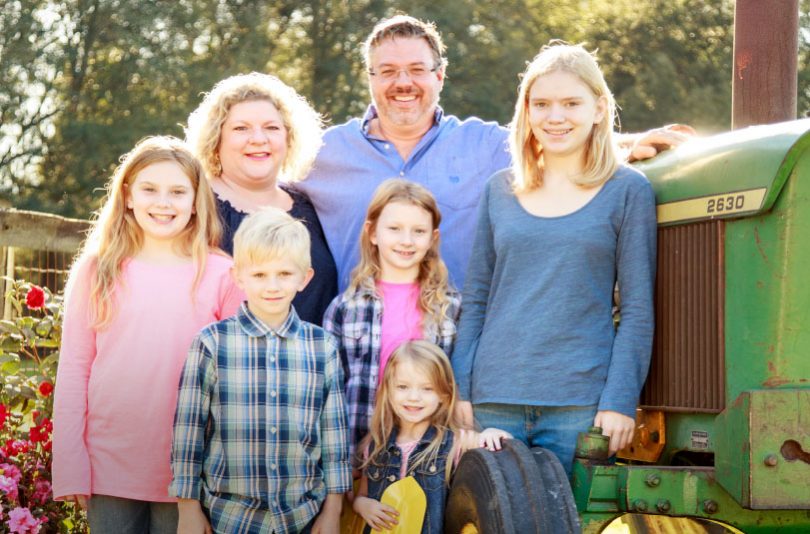 Selling their home in Haile Plantation and trading their busy suburban lifestyle for farm life was an easy choice for Jon and Kim George, given their love of gardening and everything outdoors.  Going to pick wildflowers in the front field or sending their kids out to ride their bikes around the barn has become the new normal. With 15 acres of flowering fence lines and rolling green pastures, life on their farm seems like a slice of heaven.

Jon and Kim George are the owners of Cottage Gardens Inc., a local Gainesville landscape design company. Their company aims at providing clients with a unique garden experience. “We like making these really happy spaces for people that they can enjoy. We want them to be able to look out the kitchen window and see something beautiful,” said Jon.

However, while the Georges have always had a passion for landscape design, a family of seven and a life on the farm was not always the plan.

When Kim and Jon decided they were ready to start a family of their own, they had a clear idea of what they wanted. “I had pictured four kids, two girls and two boys,” said Kim.

When the couple experienced difficulty conceiving and then difficulty adopting, they knew they would have to change their plans.

“Every time we knocked on a door, it just closed. Nothing worked out; that was very disappointing,” Kim explained. In the face of disappointment, the couple chose to take a step back and discuss their plans. In 2008, they tried again.

“We really felt like [2008] was a year for family and we wanted to concentrate on adopting kids again,” said Kim. The very next day, the Georges received a call telling them that there were three children available through foster care. Though it didn’t fit their original picture, the couple eagerly welcomed the three siblings, Kaitlyn, Ciera and Hunter, into their family. At the time, they had no idea that Kim was pregnant.

In a short time span, Kim and Jon finalized the adoption of the three siblings and welcomed their fourth child, Ellia, into the world. Suddenly, the Georges went from an empty house to four and then five children with the arrival of their youngest daughter, Juliette, in 2013. “Going from zero to five kids in such a short time turned our lives upside down, but turned out to be our biggest blessing,” said Jon. “You know God has a sense of humor when you ask for one child and end up with five!” 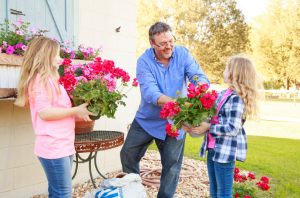 Two of Jon and Kim’s daughters, Ellia and Ciera, help their father plant flowers around their farm.

Kim and Jon quickly realized they needed more room for their expanding family. In 2014, the Georges began the search for a space that would accommodate their changing lifestyle and give their kids the space to grow and play.

With help from realtors, they discovered a neglected 15-acre homestead that had previously been a horse farm. The property held a barn and a house, and the space had everything the Georges were looking for.

Yet, the area was far from perfect. “The fields were overrun with waist-high weeds and bramble,” said Jon. Nevertheless, where most people might have seen wild growth, the Georges saw a space that, with a little hard work, had the potential to become their home.

The Georges refurbished the barn and created a home for themselves.  Jon enjoys working and living on the same land, as it keeps him close to his family and the outdoors. “Before we worked in a warehouse setting, and now we are be able to stroll around and take in the sunshine, the fresh air and the fields. It is really therapeutic,” Jon said.

For their kids, Kim and Jon hope this experience will provide them with the opportunity to grow up with expanded horizons and explore their own passions.  Jon said, “I really want to pass things down to the next generation – my love of gardening and nature to them, my faith and my understanding of the world. I don’t want the way they understand the world to be confined.”

So far, their eldest daughter, Kaitlyn, has become interested in entrepreneurship and pursues her passions by helping her parents with the family business. The younger kids Ciera, Hunter, Ellia and Juliette helped to plant wildflower seeds around the farm. A project that the George kids said “was a lot of fun.” A life on the farm has given the George family more space to grow but has been a learning experience for each of them as well.

While it is not always easy managing a family of seven and running a business, the Georges have learned to manage one step at a time. “It has allowed us to appreciate more of the simple things,” said Kim.

For the future, the Georges hope to expand their business by offering up their farm as a space for weddings and events. “We are envisioning a place where people can come and get married or have an event on our flower farm, and we will provide the scenery and bouquets,” Jon explained. Kim is currently working on a chicken coop with the kids and hopes to keep bees in the future to help pollinate the flower fields.  Life on the farm can be busy. Luckily for the Georges, with a supportive staff, loyal friends and a family of seven — they have plenty of helping hands.