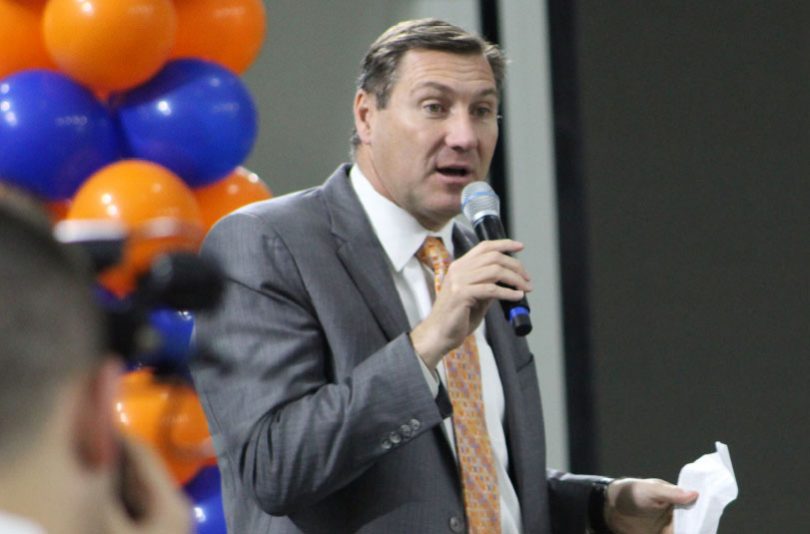 Ask any Gators fan what they expect for the upcoming football season, and a better offense is at the top of the list. After former Florida Head Coach Jim McElwain was fired, the running joke around Gainesville was that Gator fans just wanted a coach who wears a visor and has white teeth. The other major thing needed from the new coach is to break the ‘M’ curse.

Dan Mullen already checks two of those three boxes, and given the enthusiasm by Florida fans, he will check the third box. It seems the University of Florida’s football program has not done well with coaches with ‘M’ last names, starting with Urban Meyer. Yes, he brought us Tim Tebow and Riley Cooper, but he left Florida for Ohio State after he said he was leaving for health reasons. Florida fans are still salty over that maneuver.

Then there was Will Muschamp, who had big shoes to fill. That was a huge burden and expectation for Muschamp in his first year of being a head coach. An expectation that, sadly, he did not fulfill, most notably those heartbreaking defeats to Vanderbilt and Georgia Southern.

Gators win national championships. They don’t lose to teams like Georgia Southern, yet Muschamp stayed for another year. Florida football had practically reached rock bottom. No one will forget how Florida fans chanted, “FIRE MUSCHAMP!” at the Missouri game in 2014, and so the coaching hunt was on again. All kinds of names were thrown around. Dan Mullen was one of the most talked about coaches in the SEC, and he was thriving at Mississippi State. Unfortunately, he was still at the beginning of his time at Mississippi State, and he wouldn’t be likely to leave.

When Jim McElwain was announced as Florida’s head coach, Gator fans held onto their hope of having an offense and finally winning another national championship. His first year on the job seemed like things were looking up for Florida. The offense was still sloppy, but that was to be expected in the first season. Nonetheless, McElwain took the Gators to a bowl game, and the Gators could taste the national championship for McElwain’s second year coaching.

Improvement could be seen, but it still wasn’t good enough. Even though Florida had a decent season, it wasn’t a championship year. That being said, the Gators held out hope for McElwain’s third season. He would have all of his own players, and he would no longer be working with Muschamp’s leftovers. His success came to a screeching halt when nine players were suspended over a credit card fraud scheme.

After 10 long years of no national championships, Dan Mullen is back. He offers a long needed, fresh perspective for Florida football.

James Bates, captain of the 1996 national championship team coached by Steve Spurrier, said he’s fired up about the upcoming season. He wants the Gators to start winning again, and he said he has confidence in Mullen.

“What I expect is a team that plays just as hard as anyone else in college football,” Bates said. “When I look at Dan Mullen, that’s what I see. [I see] teams that are excited to be there and excited to play and go out and represent the University of Florida.”

Levana Osher, a 19-year-old clarinet player in the Gator Band, said she is excited for Mullen to bring back the tradition of the football players to stay after the game and sing the alma mater and fight song.

“Coach Mullen loves the band,” Osher said. “He spends a lot of time with them and really appreciates what they do. I’m really excited for us to go at the beginning of the season and see how he reacts with us. I think he’s going to really enjoy us, and obviously, a better team will make it more fun.”

Osher said she believes Mullen will end the ‘M’ curse, as well. 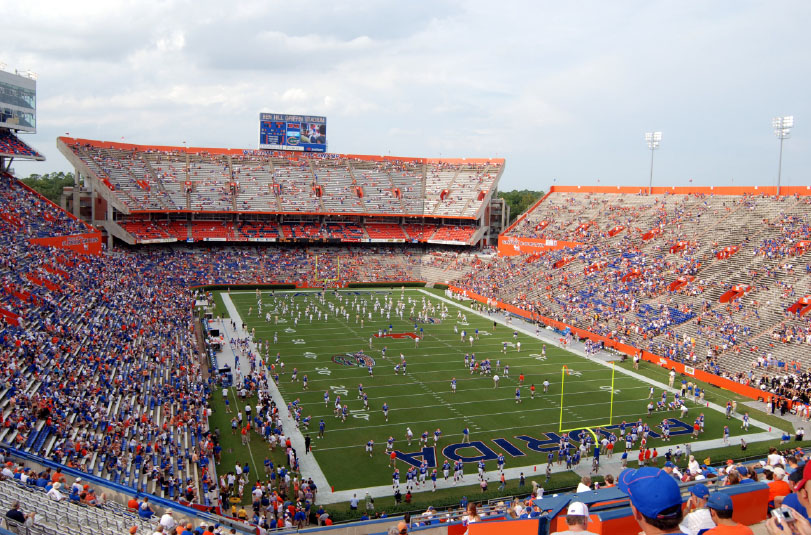 “I really hope he ends it,” she said. “He has the potential to. He has worked with us before. He’s had a lot of success at Mississippi State. I think he can. He got a lot of recruits on the offensive side.”

One of these recruits was Jacob Copeland, who surprised his mother on national signing day. Copeland’s mother was wearing an Alabama sweatshirt and a Tennessee hat in hopes that her son would sign with either team. Instead, he grabbed the Gator hat off the table, and his mother walked out of the room.

At a speaking event Feb. 7, Mullen said he knows what the expectations are this season. He said he’s prepared and excited to be the new head coach at Florida.

His speaking event focused heavily on the recruitment for the improved Gator team and his plan for the coming years. His plan was greeted with applause and enthusiasm, something Florida has been lacking over the last decade.

“The responsibility is to bring back the Gator standard,” Mullen said. “It’s not really something that has an exact definition. It’s just the standard of which we live by.”

The Gator standard, Mullen said, consists of relentless effort from the team and fans, passion, pride, and how the team acts on and off the field. The expectation is to “win at everything we do,” he said.

As Mullen made his plans clear, he made a point to bring up his intentions for the fans. The fans, he said, are crucial to turning the team around. They provide a home team advantage, and they make every team afraid to play in The Swamp.

Another concern for Gator fans is the bitter Florida/Georgia rivalry. Kirby Smart’s Bulldogs slaughtered the Gators this season, which is unacceptable by any standard. This was one of the first questions asked by a fan at Mullen’s event.

“Making it to one SEC championship doesn’t make you a dominant program,” Mullen said. “Two of the last three years, we’ve still been in the SEC championship game. Even a blind squirrel finds a nut every once in a while.”