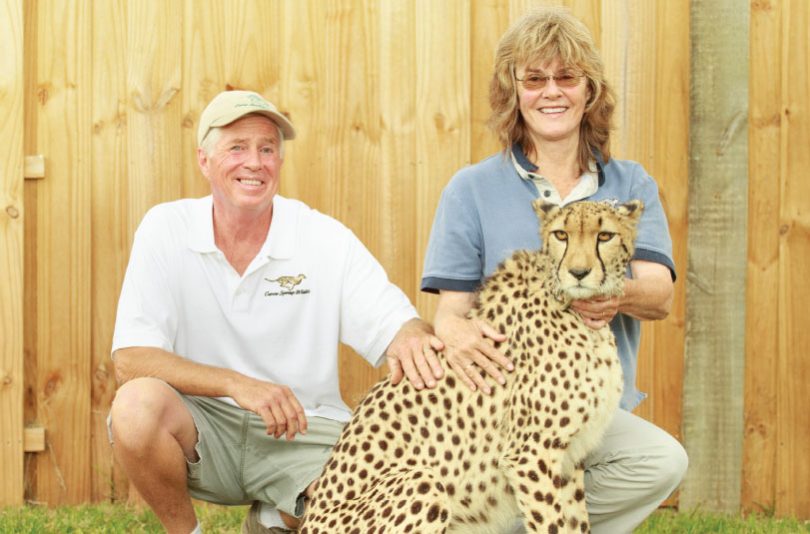 Eight feet in front of you is a predator.

He prowls where you stand. Every muscle ripples as he stalks back and forth on paws bigger than your face. Barely subdued growls rumble from deep within his chest. The only thing separating you from the magnificent tiger is a heavy-duty chain-link fence.  Gator the tiger is just one of the animals at Carson Springs Wildlife Conservation Foundation. More than 80 animals, roughly 25 species in total, call the sanctuary home.

Christine and Barry Janks founded Carson Springs in 2003 and received their first rescue animal in 2008. However, they did not open it to the public until about two years ago. According to Christine, they were always interested in conservation. During a trip to South Africa in 2001, they partnered with and became trustees of the De Wildt Cheetah Trust.

The trust no longer exists, but it used to rescue wild cheetahs and relocate them. It also bred cheetahs to prevent wild ones from being captured. These captive cheetahs were used to teach people in South Africa about the importance of conservation, Christine said.

To serve conservation closer to home, the Janks converted part of their horse farm in Gainesville for preservation and public education of species. Many of the species are rare or endangered. These animals are part of species survival plans, she said. International associations exist specifically to plan the best way to preserve a species, keep genetic records and make recommendations on breeding. Carson Springs works with these associations to preserve species. Through species survival plans, the foundation is able to find compatible mates for its endangered species to breed with.

Not only does the foundation work to preserve rare species, it also rescues wild animals from horrible situations. Christine said Samer, a lion, was the most memorable rescue.

“He was at a so-called sanctuary,” Christine said, “in a very small cage with two other lions. The lock was rusted shut, so no one ever went in to clean.” Because of an improper diet and little space to exercise his limbs, Samer had difficulty walking. His condition has improved since his move to Carson Springs. “We were only able to get them to relinquish him,” Christine said, “and had to leave the other two in that miserable place.”

Samer and Gator are just two of the animals you will see when you tour the foundation. Winding dirt paths take you past enclosure after enclosure, showcasing animals from a variety of backgrounds. The tour takes a little more than two hours. Other animals you’ll see include Matt, a cheetah; Henry, a rhino; Sugar Bear, a red ruffed lemur; and Scarlett, a spotted hyena.

Each tour group is led by a guide who works with the animals on a regular basis. As a result, they know about the different species as well as each animal’s individual stories. Tours are both educational and interactive. You can feed Henry and pet his gray, leathery skin. You can also hold up bamboo stalks for Rory, a giraffe, to munch on. Toward the end of the tour, you can pet the soft, fluffy fur of a lemur. If you’re lucky, he just might lick your hand.

The team at Carson Springs works hard to take care of the animals; meals are prepared according to a menu listing each animal’s specific diet, and all of them receive regular vet checks and routine treatments like deworming. Erica Orvis, an employee at Carson Springs, said the organization spends about $500 a month on vitamins for the animals. They also put toys in the enclosures to create an enriched environment that furthers the animals’ development.

Only a few wild places are left for animals to roam, Christine said. She believes managed, safe places will be the only way these animals can continue to exist in the world. But, funding them is an issue.

“No one donates money to save species they have not seen and don’t feel a connection with,” she said. Good wildlife parks and facilities, unlike Samer’s old “sanctuary,” are crucial in efforts to save animal species, Christine continued. These organizations help people become aware of the circumstances animals are forced to live in. More importantly, they give people the ability to make a difference.

How You Can Help?

Carson Springs Wildlife Conservation Foundation receives no state or federal funding. It relies on the caring and generosity of individuals to keep the animals that call it home alive and well. You can help by donating your time or money — become a committed volunteer, visit the foundation, hold fundraisers or donate. For more information, go to www.carsonspringswildlife.org