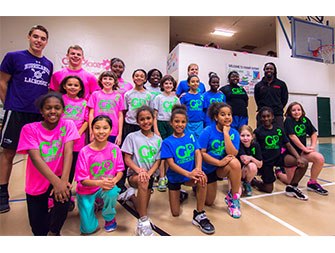 In the beginning, there was the Boys Club.

On Monday nights, they’d let girls in for a few hours of camaraderie before closing the doors to them again for the rest of the week. This didn’t sit right with the Junior Woman’s Club. “We were striving for gender equity,” said Renae Clements, who was then president of the JWC. “One of our committee said we need to have a girls club,” Clements recalled. “So, we formed a task force of high-image local people, and it turned into a board of directors to do feasibility studies around town — do we really need one? Would you support one? It was unanimously, ‘Yes.’”

And so, the Girls Club of Alachua County Inc. was born in 1981. The organization, which would be renamed Girls Place in 2004, grew slowly, borrowing space from local schools. Its objective, according to Clements, was “giving girls a safe, nurturing environment. We wanted to be a home away from home. We weren’t just going to be a nursery or a babysitting facility. We wanted to teach these girls skills and teamwork and to make them feel good about themselves.” In 1985, the first summer camp was organized, and Girls Place began taking on the form it still holds 30 years later.

As Clements sits at her breakfast table one afternoon and looks back on those 30 years, she is surrounded by pictures. Nearly every square inch of her house is crowded with them, the faces of her family and the thousands of people whose lives Girls Place touched staring back at her, a constant reminder of the passion that drove her during three decades as the executive director.

In 1987, Clements raised funds for a permanent building, including a full gym. When the girls organized into basketball teams, Clements created a league out of thin air.

“We had eight basketball teams and nobody to play,” she recalled. “We were playing each other. I would go to churches and to recreation centers in outlying towns and ask, ‘Can you put a girls basketball team together and play us in a league?’” She did the same with track as well as volleyball, which now has more than 300 participants at Girls Place.

Girls Place is ramping up its basketball program again this year. To that end, UF women’s basketball coach Amanda Butler has joined as a spokesperson.

“I believe in the mission of Girls Place,” says Butler. “It is an environment where leadership, self-respect and passion are taught and emphasized. Confidence and creativity are celebrated on a daily basis. One of my team’s priorities is service and making an impact in our community, and Girls Place offers a unique opportunity for us to empower and encourage young lives in Gainesville. It is an absolute privilege to host Swamp Chomp and connect with such a positive organization and the people who support it.”

Perhaps more than any other program, Girls Place sports have had a special impact on the community. “I’ve had mothers and grandmothers call me and saying, ‘If it hadn’t been that my child started her sports program with Girls Place, she wouldn’t have gotten a scholarship to college,’” Clements said.

Clements retired in 2013, making way for Janna Magette to step in as executive director. Magette spent six years as director of basketball operations for the UF women’s basketball team and recently completed her doctorate in leadership development. Magette believes strongly in Girls Place’s mission to revolutionize female empowerment and growth. She also credits the city of Gainesville with being extraordinarily supportive.

“To be able to look back on the last 30 years and look at the growth, I think it says a lot about Gainesville,” she said. “The support from the city has been tremendous.”

Magette respects the history of the organization, but she also has a vision for the future.

“We want a girl (who walks) in here to have every opportunity she can imagine,” she said. “There are still girls out there that aren’t being served. Until that number gets smaller and smaller, we’ve got a lot of work to do.”

One of Magette’s major initiatives is the First Place Leadership Academy. The group, which will start September 8 and be open to girls in grades four through eight, will meet twice a week and teach skills for leadership.

“It’s grounded in authentic leadership (and) discovering your authentic self,” Magette said. “We will go through some of those pillars of self awareness — understanding your values, applying your values, learning what motivates you. It will be a classroom setting, but we will also be going on field trips. I’m a big believer in leadership. That’s the big umbrella word. You can throw everything under that word — character development, conflict resolution, self awareness.”

Magette says her goal is “for the girls to have a little more confidence and assurance as they go out into the world. We’re really trying to bridge all of our programs. We do athletics; we do summer camp; we do afterschool. We feel like leadership is the bridge between all of those programs.”