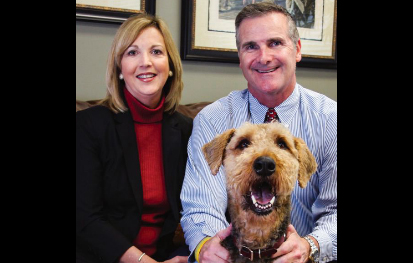 “Every new beginning comes from some other beginning’s end.”

Bill and Ginny Allen see the blessings that every day holds. Through nearly three decades of marriage, the high school sweethearts have experienced tremendous joy and success, as well as personal trials and challenges. Yet the couple has never lost faith that each day presents an opportunity for a new beginning, and they share that outlook with their family, friends, clients and community.

The Allens are in a time of transition, and they couldn’t be happier.

Within the past few months, the couple has bought a home, sold a home and moved the family business, Allen Law Firm, into a new Gainesville office space (the firm also has an office in Ocala). The two are also helping to plan their daughter’s summer wedding and often travel on weekends to see their son play baseball at Ole Miss.

Ginny laughs and says that some people ask, “Why are you doing all of this at once?”

The Allens, who are champions of change, believe that now is as good a time as ever.

They have faith in God and firmly believe that all that happens does so for a reason. Finding their new home in the Quarries subdivision is an example.

The Allens were not looking to move, but a couple of months ago something sparked them to drive into the neighborhood, which they pass daily. That’s when they saw a waterfront house for sale. They made a spontaneous decision to put in an offer, since they knew that waterfront homes in the neighborhood are rarely available. Their offer was accepted, and the Allens then put their home up for sale. Two weeks later, it sold. Ginny believes that divine intervention put them at the right place at the right time.

Bill says that he is happy he can now be home from his office in five minutes. Since they don’t take a lot of time for relaxing vacations and work together daily, the couple needs “real” downtime when they get home. Ginny likens it to a haven where they can get away…right in their backyard.

“The water soothes your soul,” she said.

“It’s not quite the family home like the one we had,” Ginny said. “But we feel blessed to have found it. We know that our family will never be the same; it will never be just the four of us again, and this home is perfect for Bill and me.”

Their son, Will, a senior at Ole Miss, is the captain and catcher for the Rebel baseball team and was recently named SEC player of the week. He will graduate in May with honors and start a new chapter of his life either attempting to play pro baseball or starting graduate school. One of Will’s baseball contacts introduced their daughter, Amanda, to her fiancé, Charlie Burchfield.

Burchfield, an Ole Miss alum and veteran who served in Iraq, works with the U.S. Army Corps of Engineers and is finishing his Ph.D. in civil engineering at the University of Florida. Amanda is in her second semester of law school at UF, where she has some of the same professors her dad did when he was in law school 22 years ago. Amanda and Charlie will be getting married in July and will then move to Mississippi, where Amanda will finish law school.

Although empty nest syndrome could easily set in, the Allens charge ahead, looking forward to the future.

Without their faith and positive outlook, the Allens may not have survived the many personal trials they have faced. In 2007, the couple quit their jobs to start their law practice.

“It took a lot of faith to do what we did…to leave two steady jobs and open our own business,” Bill said. “We only had three cases at first.”

Adding to the stress of an uncertain future, Ginny was diagnosed with non-Hodgkin’s lymphoma six weeks after they opened the doors.

“It was challenging, especially since there were only three of us working at the firm,” Bill said. “What felt like a curse at the time ended up being a blessing. If Ginny had been diagnosed before we quit our jobs, we never would have moved forward with starting our own business. As a result, we’ve been able to spend nearly every work day together since 2007, something we hardly ever did before then.”

After much treatment and what seemed to be a period of remission, Ginny had a relapse in 2009. She underwent several other rounds of radiation and chemotherapy and followed those with two years of “maintenance” chemo. To date, Ginny is in remission, but her doctors have told her that the cancer will return.

“It’s treatable but not curable,” Ginny said. “Now, I get scanned one time per year.”

Ginny’s wasn’t the first cancer diagnosis that the family had to face. Her father, who survived colon and prostate cancer, as well as her three sisters, have also fallen victim. Ginny’s sister Margaret had brain and lung cancer and passed away in 1999, and her sister Libby was diagnosed in 2011 with the same type of non-Hodgkin’s lymphoma as Ginny. During Ginny’s relapse in 2009, her third sister, Adamarie, who works at the firm with the couple, was diagnosed with breast and thyroid cancer.

“Just as we’re going through transitions in our life right now,” Ginny adds, “our clients always have to deal with change…and it’s our job to help them make those changes, new starts and new beginnings go as smoothly as possible.”

As a result, the couple tries to help their clients recover financially and put themselves and their lives back together.

Life is full of “the good, the bad and the ugly,” Bill said. “How you deal with it is so very important.”

Bill and Ginny’s attitude has helped them recover from their challenges and motivates them to take on whatever comes their way.

“All the busy, crazy stuff…we’re going to enjoy the heck out of it,” Ginny said.

In September, the Allens are traveling to Paris and Normandy, both to celebrate their 29th wedding anniversary as well as to see a bit of history. Their fathers were both veterans, serving in World War II and the Korean War. Bill, an avid historian, has always wanted to set foot on the beaches of Normandy in remembrance of D-Day.

The one element that will never end is the Allens’ love for one another and their zeal for life.

As Ginny exclaimed, “You just have to laugh and hold on for the ride, and that’s exactly what we’re going to do!”

The Allens support the community in many ways, but their passion is raising funds for cancer research and treatment. They are big supporters of the Leukemia and Lymphoma Society and participate in the Relay for Life in Levy County, which is where Ginny grew up and where her sisters live. Bill also served on the Alachua County board for the American Cancer Society.

“Almost every family has been affected by cancer. It touches everyone through either families or friends, and it changes your perspective on life,” Bill said. “We cherish every day.”