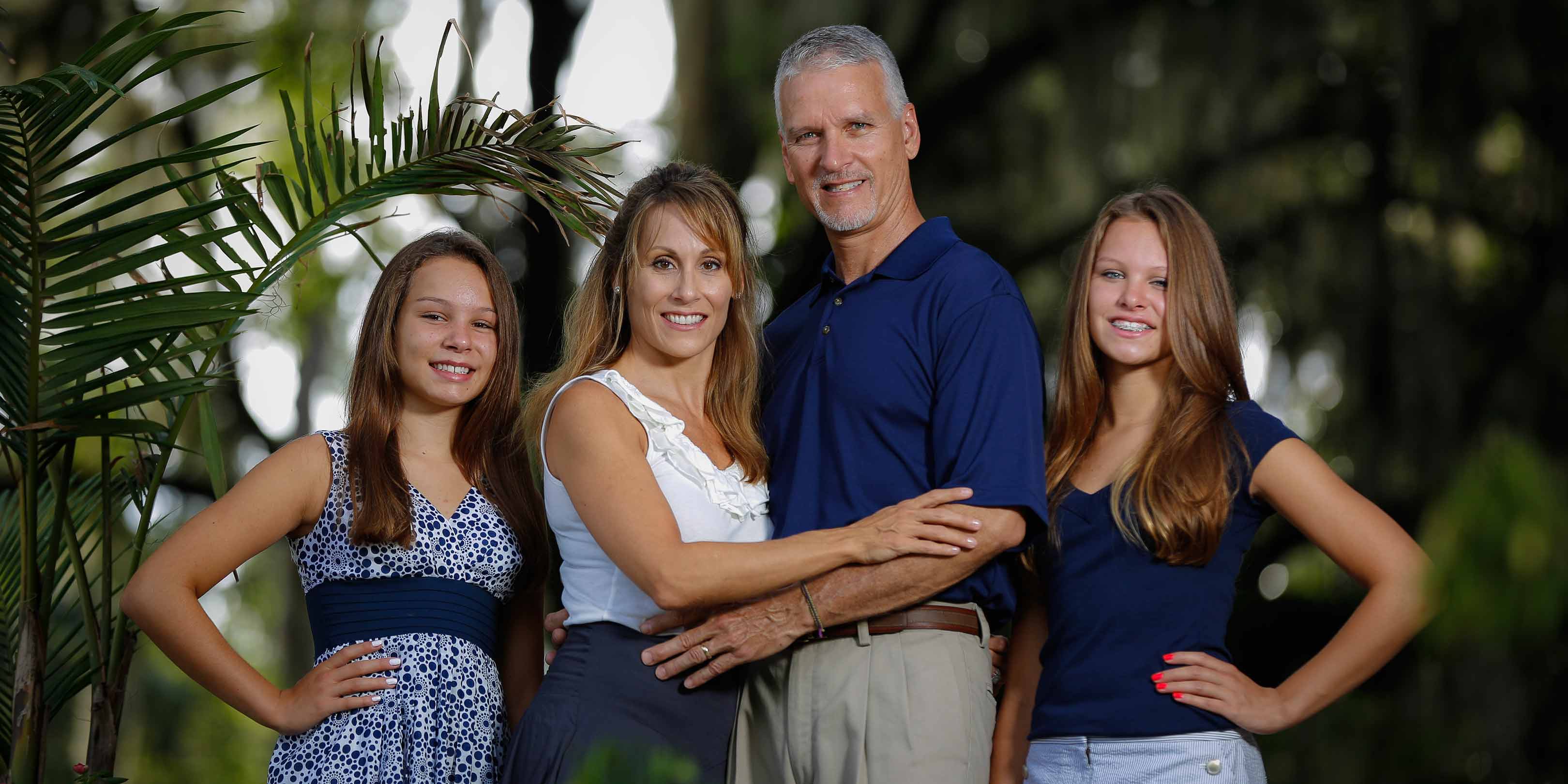 Looking at the successful business owner, family man, politician and philanthropist, it’s hard to imagine Keith Perry as anything but a straight-A student. Surprisingly, the environmental conversationalist never liked the idea of sitting inside a stuffy classroom, as he constantly itched to get back outside and build tree forts in the woods.

Growing up in Gainesville, building became an instant attraction to this outdoorsman. Right out of high school, he jumped headfirst into the arduous field, roofing a couple of houses with Tom Robinson. On what was supposed to be a break before college, he partnered with a friend and bought a truck to start a small roofing business of his own. After the business took off, and he found himself working his dream job, plans for college were dismissed and Perry Roofing Contractors took off.

“One of the things I was fortunate with was education,” Keith said. “While I was not a great student in school, I started my business young which forced me to – at a very young age – learn things the hard way. I made mistakes, but I learned everything about running a business; you learn a lot without any finance or capital or anyone to help you. It was an incredible learning experience for a young kid to be in that environment.”

Perry Roofing, which now has more than 90 employees in three locations, gave him the opportunity to both train and grow alongside fellow builders, forming a cohesive and passionate team.

“It’s very tangible work, you get done with a job and see what you’ve accomplished— that you’ve worked with your hands and you’ve done something,” he said. “In one of the most unglamorous industries, you’re providing one of most basic necessities there is—shelter.”

And as business grew, so did Keith’s family. He married Amy, the Auburn University gymnast who captured his heart, in 1994. “She’s extremely funny and entertaining,” he said. “She just has a great personality. She likes people and is a very giving and compassionate person.”

Because of his established business, Keith and Amy never gave moving anywhere else a second thought. They expanded their family with two daughters, Alexis, 15, and Amanda, 12. The family of four now lives on Biven’s Arms Lake, which Keith said is the perfect balance of country and city—located just two miles from downtown Gainesville, but with cows in their side yard and alligators in the backyard.

It was having children of his own that served as a driving force for making a change. Although he’d been involved in politics on the peripheral for the last 36 years as a business owner and manager, he only considered running for office a couple of years ago, after he was approached by his longtime friend Sen. Steve Oelrich.

“He encouraged me to consider running for office,” Keith recalled. “I was flattered he would think of me, and I told him I thought maybe in two or three weeks I could make a decision on whether or not it was something to pursue. A few months later, I decided to run because I felt like it was a calling in my life.”

Running for state representative in 2009, he recalled a tough primary against an Ocala-native Republican. After winning the vote of Alachua, Levy and Marion counties, he went on to the general election and was elected to the house in 2010.

Keith found that campaigning for office came with something he was all too familiar with as a roofer—challenge.

“I like that there are quantifiable rewards and losses for your efforts, and so you always struggle with both success and failure,” Keith said. “And success was more than a paycheck, it was being able to do and create something—and it was something you wanted to do.”

Running again for state representative is something Keith views as an additional job to his roofing company. “I look at campaigning like I do work. If you want to be successful you need to give it your all, but by doing that it certainly takes a lot of time.”

Because both of his daughters play club volleyball, the family is given a lot of opportunity to travel together. When Keith is in office in Tallahassee, he makes sure he is home to see his family each weekend. When he is campaigning, he likes to visit his lake house in the country where he can swim and Jet Ski with his wife and daughters. They love canoeing on the Suwannee River and taking camping trips together.

“When I think about the uniqueness of this area I think of the rivers and lakes and springs,” he said. “Most people outside of this area don’t understand or know the real beauty or history of this area, and I think it’s important to work hard to maintain the natural beauty and protect it.”

Aside from actively preserving the natural state of the environment, Keith hopes – if elected – to expand the agriculture base and protect the greenbelt classification of farms. He also believes: the government should create a pro-business environment that allows the job market to thrive; property taxes, corporate taxes and additional fees should be reduced by eliminating excess spending and funding only necessary aspects of government; and medical schools should be invested in to spur research and help create the best doctors possible, while insurance companies are allowed to sell across state lines to help lower the high price of medical insurance.

“One of the things that have been both fulfilling and encouraging is the process of being able to get things done that I think are good for taxpayers and for the future and my children,” he said. “But the frustrating part is that there are a minority of people who are self-serving in their political quest. It’s frustrating that people would put their own personal interest over the people’s— and even more frustrating that they sometimes get away with it.”

This process, Keith said, is difficult to monitor, but he’s conjured specific changes to make it more organized, especially regarding the way legislation is filed and how it moves through office. One of his major political goals is to look at the boundary of where government provides the necessary services, but without impending upon personal freedoms. What sets our country apart, Keith said, is individual rights and individual freedoms—not collectivism.

“I think we’ve gone too far in the direction of collectivism or socialism, he said. “You cannot have a society where we all have collective rights and keep individual rights—it’s incompatible. My strong belief is that the only way that any society has ever been prosperous is in a free society. Every society throughout history that has veered from those basic principles – from individual freedom and rights – has found themselves either totally imploded or a mediocre society. I think our founding documents were so unique and so well thought-out to understand both man’s inherent weaknesses of not being able to control power and themselves. America has proved what can happen when people are free—they can prosper or fail on their own. It’s not only good for the individuals, but it’s good for society.”

The foundation for Keith’s beliefs comes from personal business experience and largely from his faith as a Christian.

“I have a strong faith in God and both my fallibilities and my redemption, it’s where I can get inspiration from,” he said.

Through events that happened early in his life, along with his faith, Keith was instrumental in the founding of House of Hope, a Christian-based rehabilitation program for newly released prisoners. Keith served as president of the organization for 14 years, up until his term in office. In addition to his involvement with House of Hope, Keith and Amy help local causes in any way possible. Perry Roofing has committed to donating and building – at no cost – every roof for the local Habitat for Humanity projects. Perry Roofing also built the roof for the PACE Center for Girls’ building expansion, and has also donated roofs to the Boys and Girls Clubs and the Cotton Club.

“If there are programs out there that don’t have the resources, we will try to help in any way we can,” Keith said. “We think it’s a blessing to be able to provide for them.”

As a politician, his main goal is to serve the community as a whole, minimizing the size and domination of government, in turn, he said, giving everyone the opportunity to succeed.

“A lot of people are so busy with their lives that politics is put on the back burner and their education is based upon sound bites or headlines. A lot of us put on blinders when we talk about politics in general and we’re unwilling to take them off and experience what’s best for us as a community,” Keith said. “My goal as a politician now is to be as open-minded as I can and learn as much as I can about the diversity in our community, and then make decisions that are best for our community as a whole.”