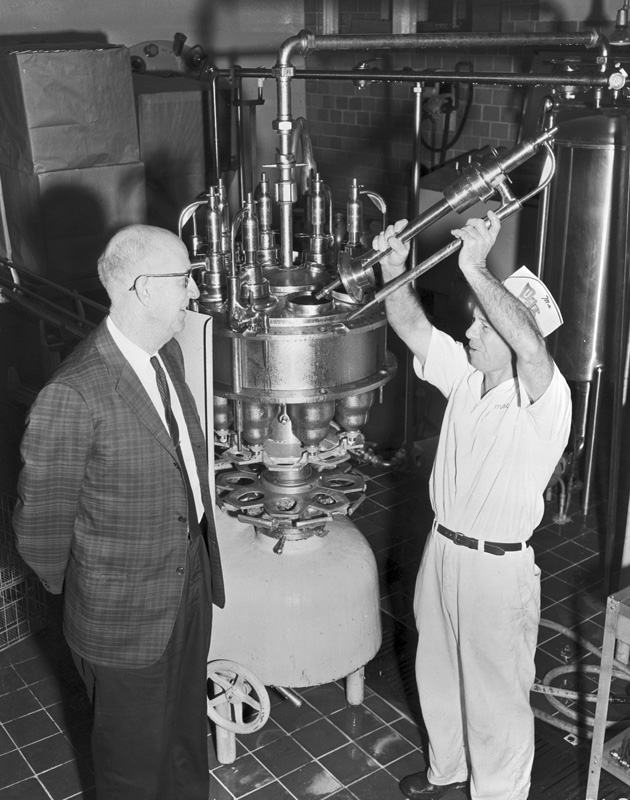 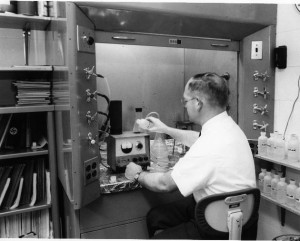 The story of how Dr. Robert Cade and his team developed Gatorade™ in 1965 to help University of Florida athletes replenish water and electrolyte levels is well known. But, what about “Gator Go”? This issue’s History at HOME unearths a forgotten sports nutrition drink also developed at UF that never achieved the popularity of Gatorade™.

It was a great time on campus in 1967. Steve Spurrier had just led the football team to an Orange Bowl victory over Georgia Tech — the yellow jackets’ head coach sarcastically remarked that his team lost because they didn’t have Gatorade. It seemed the research team at Florida had given their athletes a competitive advantage. Brady Greathouse, an athletic trainer at UF, asked if a similar drink could be developed with milk to help develop athletic strength.

Dr. Everett L. Fouts rose to the challenge. He was a professor in the Department of Dairy Science at the UF Institute of Food and Agricultural Sciences. He knew Gatorade™ had been developed to provide fluids and electrolytes during exercise, but what if there was a product to help muscles store protein and carbohydrates before exercising? He discussed it with Dr. Cade, a professor of medicine at UF, who also believed that a high-carbohydrate meal before a game was more beneficial to an athlete than upsetting the gastrointestinal tract with carbohydrates during physical exertion. The two began to work together on a solution.

The result was “Gator Go,” a high-protein, low-fat milk drink to supplement athletic training and performance. Ideally, athletes would drink it before exercise as a way to provide pre-game nutrition. Partnering with Dr. Cade, Fouts spent two years researching the product. Fouts wanted it to taste as good as a milkshake but provide more nutrition at less expense than similar products on the market. Instead of relying on artificial or synthetic proteins, Fouts used his knowledge of the nutritional qualities of milk and opted for a base liquid of homogenized milk.

Gator swimming and basketball teams used the drink during the research period and provided positive feedback to Dr. Fouts. Seeing the potential for a larger market and sales in grocery stores and vending machines, Dr. Fouts put the product through a consumer acceptance test. Gator Go was packaged in a white milk carton that contained 10 ounces of the drink. Printed on the outside of the carton was an upright alligator posed in a boxer’s stance, the icon of strength, with an “F” emblazoned on its chest. For 20 cents, students could purchase Gator Go, which came in vanilla or chocolate flavors, at food service areas on campus. Dr. Fouts claimed that during this period, more than 100,000 cartons were sold.

With such a popular response, he was ready to take the marketing to the next level. He wrote a new product development memo for the Department of Dairy Science detailing the creation of Gator Go. He described the drink as “a blend of milk products and certain other highly nutritious ingredients, resulting in a low fat, high protein, energy drink in a fresh 2% milk base with additional minerals, essential vitamins and flavoring substances.”

The new strategy was to market the drink as a diet supplement, an athletic energy drink and a bodybuilding food. The target consumer base was “active people of all ages” and the product’s developers sought “to give new strength to those who desire to or need to lead a vigorous life.” To promote the drink, high school and college coaches throughout Florida received a special mailing offering them samples of Gator Go.

Mass production of Gator Go required a manufacturer who could create the dry ingredients and then ship them to a milk processing facility where they could be added to two-percent milk. In 1970, Dari-Tech Corp. of Atlanta was hired to provide the mix to local dairies, and Hood’s Dairy was contracted to distribute the finished product.

A milk-based drink had limitations, however. After it was mixed, the product had only a 10-day shelf life. Even after efforts to reformulate the drink to extend its shelf life, Gator Go didn’t generate large sales. While its sister drink, Gatorade, shot to fame and widespread use, Gator Go was forgotten. It was remarketed as Go! in the 1980s with minimal results. Several companies purchased the drink’s formula, only to sell it once again. At one point, it was sold to the U.S. military, but it never became a profitable product.

Dr. Cade had the science correct — ask any marathon runner who carbohydrate-loads during the days before a race — and recent research has indicated that drinking protein shakes after exercise helps muscles reb

Had Gator Go experienced a clear demonstration of its efficacy similar to Gatorade™, as the Gator football team surged past opponents in the second half of muggy summer games, we might remember Gator Go today as something other than a relic of the past.