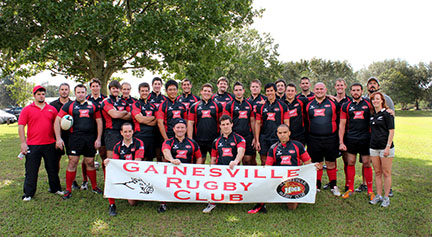 A “rugby scrum” epitomizes the sport of rugby in a way no other sports phrase can.

A bunch of burly men hunched over, arms and heads locked, dirt and mud cascading over tattered uniforms, trying to gain possession of a ball being tortured amid the chaos.

Rugby is for the tough, strong, and gritty soul.

And yet, in the purest form of irony, successful rugby cannot be played without a sense of discipline and compassion—and sometimes the most unlikely of leaders can emerge to restore that balance.

The Gainesville Rugby Club, which was founded in 2003 and is known as the “Hogs,” had spiraled into mediocrity in recent years after some early success. After finishing sixth nationally in 2007, the Hogs lost irreplaceable talent, which led to several losing seasons.

Rock bottom came in spring 2009 when the squad only managed one win and one tie on a schedule that was otherwise filled with L’s.

The Hogs were like the ball in a rugby scrum, being battered around in chaos with no sliver of room for escape. That is, until Kerri O’Malley showed up to offer some promise to the once proud rugby club.

O’Malley helped start a women’s rugby squad while attending Albright College in Pennsylvania in 1995. After graduation, she played on the Philadelphia Women’s Club team while working towards her PhD. The Philly club team was a well-known and well-respected team that performed impressively on the national level.

After moving to Gainesville to finish her doctorate degree, O’Malley sought out the only women’s team in Gainesville, the UF women’s club team, and began as a player and assistant coach. She flourished as an assistant and eventually became the head coach, leading her team to several Florida championships, two South championships and two entries into the Division I national round of 16.

When O’Malley wanted to take up a new challenge and take over as leader of the struggling Hogs, current player and co-founder of the Hogs, Gage Miller, said it was a no-brainer.

“Rugby is a tight community, so the team at the time knew Kerri very well,” Miller said. “There was no hesitation about having a woman coach.”

Miller said that while the Hogs embraced such a well-respected woman as their leader, there were still the expected jokes and jabs from opposing teams. He said the Hogs just let their play do the talking.

“In the end, all that matters is how the team plays on the field,” he said. “And our success under Kerri’s coaching is testimony enough for anyone.”

While success didn’t come abruptly for the Hogs in O’Malley’s first season, it served as a beneficial warm-up for the season that actually counts, the spring Matrix season, which is put together by the Florida Rugby Union and USA Rugby.

The Hogs won the Florida Championship in the spring of 2011 and continued to improve into the fall season.

The road to success was not always easy for O’Malley though, who decided to switch from coaching the UF women to coaching men because of the urge to challenge herself.

“When I first started coaching the Hogs, a lot of the other men’s coaches didn’t take me seriously,” O’Malley said. “I like to talk with opposing coaches after the games about our teams to see what we can improve upon, but some of the coaches didn’t think I knew the game. Then we started beating them.”

She said it was especially tough for her because of the type of coach she is, always wanting to collaborate thoughts and learn more about how to do a better job.

Despite the uncooperativeness from opposing coaches, O’Malley brought openness to her team when discussing problems after games.

“We have this thing I call ‘the kumbaya,’ where we all sit in a circle after games and discuss how we played,” she said. “We can discuss problems or mistakes, but my one rule is that if you say something negative, you have to follow it with something positive.”

Miller, who has known O’Malley since they went to school together at Albright College, said the team embraces the characteristics O’Malley brings to the team.

“I think she brings a balance and compassion to our team we didn’t have before,” he said. “She makes you earn your playtime, but once you’ve earned it, she’s not afraid to get you in the game even if you’re a little raw and unproven.”

O’Malley admits she even treats the team with some motherly qualities at times.

“It’s been proven that chocolate milk is a good post-workout fluid because of the nutrients and protein it replenishes in the body,” she said. “So, I started this routine last year where we pass out cups of chocolate milk after games. Sometimes other teams look at us kind of weird, but it’s become an inside joke that it’s our secret to success.”

Weird or not, one thing is for certain. O’Malley has proven she and her Hogs needs to be taken seriously on the rugby field.