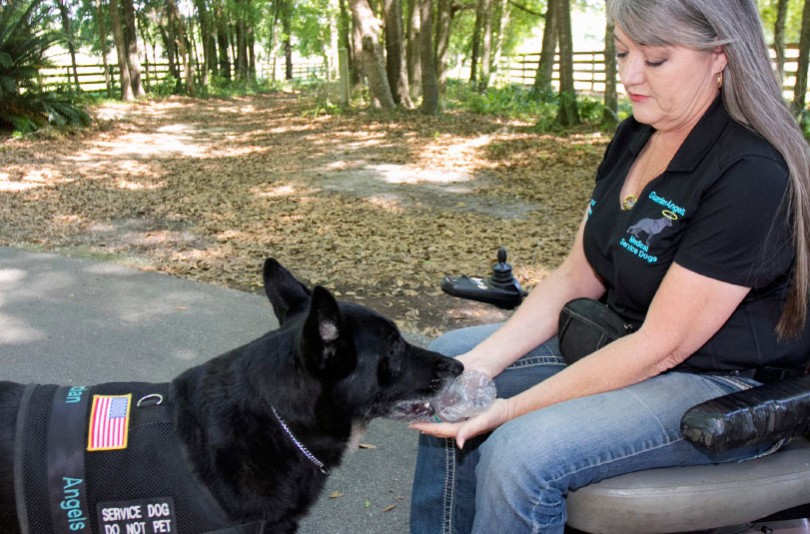 Rudy Lorie has gone from isolation to engagement, thanks to medical service dogs. He’s been with his second dog, Rocket, since February. Rocket replaced Zena, who had assisted Rudy for two years before being retired. Life was limited before Zena joined Rudy, a veteran from Ocala who suffers from brain damage and physical limitations due to civilian accidents, including bricks falling on his head in 1982. “I was a very guarded person before I got Zena,” Rudy said. “I didn’t feel safe from one moment to the next, and I was a hermit.”

Rocket increases Rudy’s sense of safety by nudging him when he’s laboring to breathe during the night. “He senses something is going to be wrong before it happens,” Rudy said. “It’s uncanny.” Rocket also provides Rudy with a sense of security when they’re in public by blocking anyone who he senses may pose a danger and by helping to stabilize him. “When I give him the command ‘brace,’ he hunkers down,” Rudy said. “He’s a godsend. He allows me to do everyday things that most people take for granted. He’s ignited something that was missing.”

Medical service dogs are transforming the lives of recipients throughout North Central Florida. Two nonprofit organizations have extensive operations that provide more than two years of training for each dog.

Guardian Angels Medical Service Dogs, which provided Rudy with his dogs, is headquartered at a former horse farm near Williston. The organization relies heavily on volunteers, including members of University of Florida fraternities and sororities. “It’s hard work,” said Founder and Executive Director Carol Borden. “I feel very privileged and blessed to provide this service.”

New Horizons Service Dogs, located in Orange City, Florida, provides many dogs for Gainesville-area residents and involves area residents as volunteers. Both organizations provide their dogs free of charge to the recipients, and they raise private funds to cover the approximately $20,000 that it costs to bring a dog into service.

Several of the dogs used by veterans at the Malcom Randall Veterans Affairs Medical Center in Gainesville come through Southeastern Guide Dogs in Tampa, Florida, said Chris McKenna, a nurse practitioner in the post-traumatic stress disorder (PTSD) clinic. Research validates the effectiveness of trained therapy or service animals in helping people with anxiety and social phobia, she explained. “Having the dog there makes you more focused on the present,” she said. “You’re not dwelling on ‘what if, what if, what if.’”

Dogs have an uncanny ability to gently wake up their owners during nightmares and help them calm down. “I’m not sure how they can tell the difference between dreams and nightmares, but they do,” McKenna said.

People with PTSD generally have trouble socializing, an area where dogs naturally excel. “A dog gives his owner more of a sense of security,” McKenna said. “He’s your friend and confidant. When you meet people, they talk about the dog, taking the focus off you.”

McKenna recalled a time when she was meeting with a client and his dog started acting unusually. “The dog was being really annoying,” she said. “I knew the client was diabetic, and I asked him to check his blood sugar.” His blood sugar had dropped, and the client was fine after getting something to eat. “The dog didn’t have any training in this area, but he sensed there was a problem,” McKenna said.

Another client, who had lived in isolation before he got his dog, recently took an airline flight with his dog. “[Thanks to the dog], he did just fine,” McKenna said.

Jonathan Landers, a tall 16-year-old on the autistic spectrum, seldom looked people in the eye two years ago. That began to change as soon as he met Bishop when he went to New Horizons to be paired with a service dog. “He picked me, and I knew he loved me,” Jonathan said. “Most other dogs didn’t like me.”

Today, Jonathan is a ready conversationalist, and his favorite topic is Bishop. Bishop is Jonathan’s constant companion. “Before, Jon always needed to be close to me,” said his mother, Randy Landers.

Josh Wooten was an active kid until age 10. That’s when he was diagnosed with Friedreich’s ataxia, an inherited disease that causes progressive damage to the nervous system. “I was a little kid,” he said. “It was hard to deal with.” Josh has grown to accept his condition, and he’s grateful for the help of Boulder, the medical service dog from New Horizons that he’s owned for the past five years. “It’s not all that bad,” he said. “People are extra nice to me. Who else can bring a dog everywhere?”

Boulder’s primary duty is stabilizing Josh when he’s in his walker or getting in and out of his car. Josh is a student at Santa Fe College, and he navigates the campus with a motorized wheelchair that he stores there.

According to Josh, Boulder has two modes: regular dog and working dog. “He’s a beautiful dog, and he loves to play ball and have fun,” Josh said. “He’s spoiled, but he takes his job seriously when he has his vest on.”

“It takes thousands and thousands of hours of training for each dog,” said New Horizons Executive Director Janet Severt. “We have a 93 percent success rate.” Socialization begins on day two after birth. At eight weeks, the dogs go to a foster home, where “puppy raisers” focus on house training and obedience skills. At six to eight months, the dogs begin training as service animals. New Horizons uses prisoners, staff and volunteers in four prisons for much of the training. “The dogs love to learn to do a job, and the prisoners take on a sense of responsibility,” Severt said. “They say that it makes them better parents, and we’ve hired several of the prisoners after they were released.” The final training occurs at the organization’s facility in West Palm Beach. The dogs need to become mature enough to take on their responsibilities, Severt said. By the age of two-and-a-half, the dogs are ready to be paired with recipients.

Although New Horizons doesn’t charge for its dogs, it does require recipients to be financially capable of caring for them. It also asks recipients to go on fundraising speaking engagements. Recipients can relate to Severt, who is a quadriplegic and has her own medical service dog.

Service dogs have a distinct role that is different than that of therapy dogs, Borden of Guardian Angels noted. That role includes performing functions that owner can’t do for themselves, including opening doors equipped with rope handles, dialing a special emergency phone and picking up items the recipient drops. They also provide protection by shielding owners from people the dogs perceive as threats as well as serving as a brace when the owner needs support.

The use of service animals received a boost when the Americans with Disabilities Act went into effect in 1990, Borden noted. The ADA, which recognizes service dogs as those trained to assist people with a physical, medical or mental disability, gives the dogs the same rights in where they go as their owners have.

For Jonathan Landers, assurance that Bishop can be with him constantly is important, said his mother Randy. “They are attached like glue,” she said. “Bishop recognizes his attitudes and behaviors. He can bark if Jon feels threatened in a store, or he can cuddle with him and calm him down.”

How to Get Involved

Local organizations that provide service dogs can use your help. To learn more: