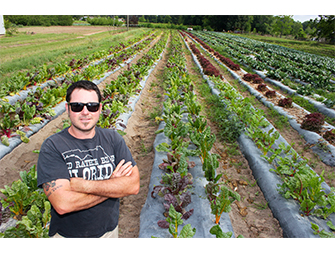 Jordan Brown pulls his living from the black earth. His fingernails are dirty because they have to be, because the soil caked beneath them determines his fate. He is a farmer, and as farmers go, he is as rare as a Florida strawberry in July.

On top of being a certified organic farmer, Brown is the only farmer in the state of Florida certified in food justice. 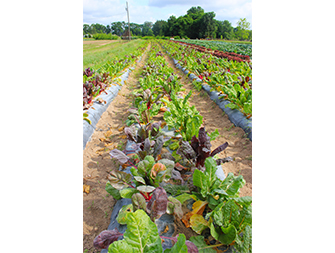 “Our farm has two certifications, one to certify that we follow the organic rules and one that certifies that we have a fair workplace and try to pay a living wage,” Brown said. “Following the rules on both of these programs is important to me because I know that I have responsibilities before God. To be honest in following the organic rules and to do justice to others, especially those I hold a level of authority over — this is my responsibility as I follow Jesus.”

“Jordan is a perfect example of a farmer and someone who treats people fairly,” said Jenni Williams, communications director of Florida Certified Organic Growers and Consumers Inc. “He goes above and beyond to treat people with respect and dignity.”

Brown, who graduated from the University of Florida with a degree in agronomy, also runs a Community Supported Agriculture program, which allows him to sell his produce directly to customers.

“Buying a CSA share is for people who enjoy cooking and are open to trying new things,” Brown said. “If someone signs up for our CSA, they will get a higher quality product at a lower price than any organic produce in the grocery store.”

Brown’s CSA now has 200 members who pick up produce from one of three locations: Thursday at UF or Saturday at the Alachua County Farmer’s Market as well as on the actual farm itself. As such, he is part of the farm-to-table movement, which helps consumers become more involved with where their food comes from and how it is grown.

“The farm-to-table movement has really gotten off the ground in the last few years from people asking questions about what’s in food, how things are made (and) where they come from,” Williams said. “Gainesville is a hub of the farm-to-table movement. The farmers’ markets are very well attended by local farmers. It’s a very grassroots movement. People want to know what’s in their food and where it’s coming from. It may not be organic, but if you get to know your farmer and how they process their crops, it brings a lot of people a lot of peace of mind.”

Tom Almquist, a resident of Gainesville, has participated in Brown’s CSA for two years and said it has had a beneficial impact on his health.

“About a year ago, we went on a health kick,” Almquist said. “My wife and I tried to eat more vegetables in our diet. We went vegan for a couple of months. The Family Garden CSA helped get us enough vegetables to be able to do that in a healthy and financially sound way.”

Almquist said the CSA has also provided an important learning experience for his 9-year-old daughter and 5-year-old son.

“We’ve gotten them to try different veggies,” he said. “They know where it comes from. We call Jordan ‘our farmer.’ They get the idea that food doesn’t just come in a box from the store. It grows from the ground, and people work to grow it. That whole concept is clear to them. We have a deal with them that if they at least try everything we make during the week, one of them gets to pick where we eat Friday and the other gets to pick Saturday. That’s their reward for trying Brussels sprouts or Romanesco.”

For Brown, going to the market each week and meeting the people who eat the fruits (and vegetables) of his labor is a great reward. 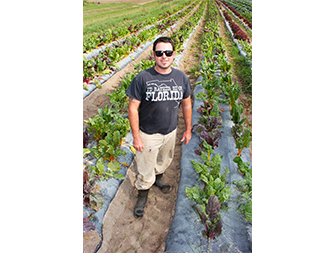 “I leave the farm about three on Thursday afternoons, usually stressed out about some problem at work,” he said. “I rush over to Gainesville and hurry up and unload everything. Then, when it is all laid out and the people start coming up and getting their share, I relax a little. They talk to me, telling me what great dish they made last week or how they have finally gotten their kids to eat vegetables since they joined the CSA, or how nice something looks, and all my stress and anxiety just melts away.”