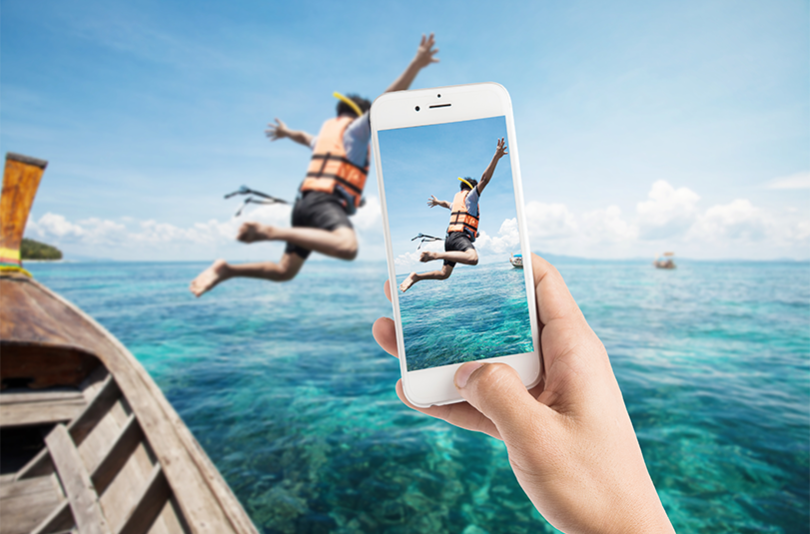 From the days of sketches and heliographs all the way to smartphones, photos are easier than ever to take. Believe it or not, whether you’re using a fancy camera, polaroid, disposable or even an iPhone, it’s possible to take a photo that looks like it belongs in a gallery. However, it’s not necessarily the device that makes these photos the quality they have the potential to be – it’s you. As the artist behind the lens, following quick tips professionals use with every photo can help boost your pictures from amateur level to masterpieces.

If you think it’s time to spice up your iPhone photography game, associate professor Dr. Craig Smith said to consider your photograph like it’s a painting or drawing and prioritize your subject matter. Smith teaches advanced photography courses at the University of Florida. Aside from his teachings, Smith is a grant-winning artist himself who has written three books about the practice of the art. Smith advised steps one can take with their iPhone to step up their game and make their pictures true works of art.

What’s the most important aspect you’re trying to capture in the photo? Is it your dog? Your best friend? Or maybe your new car? No matter what your focus, make sure you know what it is before taking the picture. This first step will make the rest of the photo-taking process a piece of cake.

For example, say you’re taking a picture of your dog at the park. I’m sure your dog is much cuter than the squirrel scurrying between trees in the background, so show that; make sure your dog is the real focus of the picture and there aren’t any distracting elements.

Now that you know what subject you want to prioritize, fill as much of the frame as you can with that subject. Your iPhone is smart and so is its camera. The camera automatically knows how to grab the best light possible for your picture, and the more your subject fills the screen, the better the camera is able to find the perfect light to make that subject shine.

Smith explained that iPhone users often fill their frames with things other than their subject matter. He used the example of taking a family photo in front of a family home and attempting to get the entire family and home in the photo. Because there are so many different things going, the camera doesn’t know where to go and is less likely to find the right exposure to make the photo look professional. On fancier cameras it is possible to adjust those settings, but your iPhone camera needs more guidance from the content within the photo screen.

It is understandable, however, for the eyes behind the lens to want to capture a photo with more going on, such as a family with their home. In this case, consider your position and angles. It’s OK if the house is in the background of that photo, but fill the frame with the most important subject — the family. Fancier cameras give users more options before taking a photo, but when it comes to the iPhone camera, filling your frame will let the camera know what to focus on.

3. Pick the Right Time and Weather

“Don’t be afraid of cloudy or overcast days,” Smith said. “They provide a more even contrast across the frame.”

He said that the best times to take photos are overcast days, in the late evening or early morning. These are optimal because the lighting provides better coloring and clarity, as high contrast isn’t blocking important aspects of the photo.

If you’re interested in taking landscape photos, Smith advised taking them with less contrast in mind, meaning cloudy days are your friend.

4. Know When to Use Flash

Smith advised using the flash between six and eight feet of distance from the subject. However far you are from your subject, ensure you are prioritizing it just the same as previously mentioned. This step is especially important when using flash because it will pick up on the object that is filling most of the frame and fall directly on that subject. If you don’t have a noticeable subject, the flash will bounce everywhere and the camera will not know where to focus.

“The flash falls and reflects on the largest area that is closest to it,” Smith said.

He also noted to press the shutter remembering that this will cause a one- to two-second delay before the photograph is actually captured.

“Photographs are ways of trying to remember something as being exceptional,” Smith said.

He reminds us all that when we’re taking photos, we are photographing our friends and family and wanting to remember that moment. This means we want a photo that captures great people having an incredible time.

“Nobody wants to be photographed to be ordinary,” he said. “Consider a mugshot, driver’s license or an awkward photo with Santa Claus [at the mall]. Those are the most ordinary photos.”

He said these photos are too normal and that’s why people complain about them. They are shot at the same height and parallel to the subject. There’s no exceptional view.

Smith recommends aiming a bit higher or lower from the subject to begin creating a photograph different from the norm. He said that the slightest angle change can sometimes take a photo from ordinary to exceptional.

“The photos most find more memorable are those that look surprising,” he said.

So, go out and find your focus (maybe even a muse). Then follow the aforementioned tips to take your amateur photos to the next level and start producing your masterpieces. Aim for the best lighting you can and take chances with your angle choices. The memories you’re capturing are exceptional; let your pictures show that.