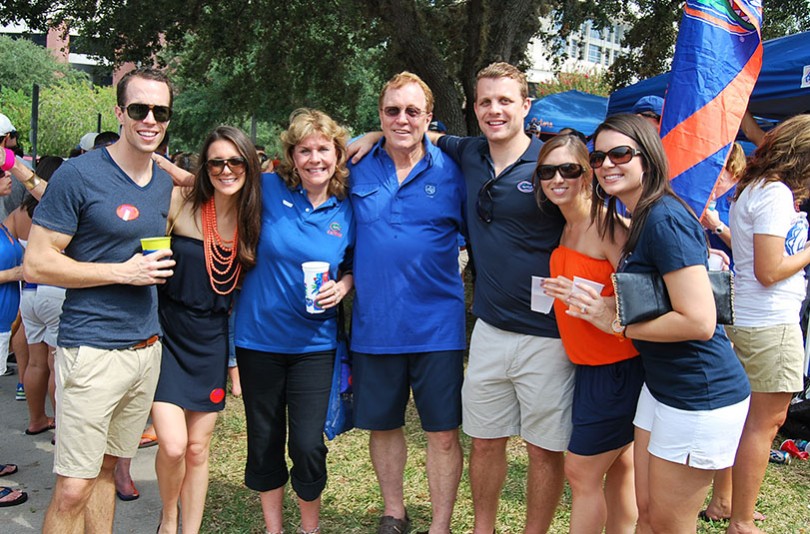 It all started with a parking permit for the Stephen C. O’Connell center.

“It’s only seven times a year,” said Shariq Siraj’s friend, Tony, when asked why he started tailgating 12 hours early for a night game starting at 7 p.m.

Around 1990, at the dawn of the Steve Spurrier era, there weren’t many tailgates in the O’Connell Center lot. The parking garage wasn’t even built yet.

Siraj, his wife, another couple and a friend decided to park where that lot would be built, and just like the people around them, decided to bring food, drinks and a cooler. They invited friends, who then brought friends, who then brought more friends, and so on. Someone said they should bring a radio. Next thing you know, nobody could hear it because there were so many people, so they decided to get a DJ. And after that, they said they might as well pay for live music.

It grew little by little, and in five years, expanded to a full production. Recently, the tailgate has been hosted in the parking lot behind St. Augustine Catholic Church on West University Avenue, but the spot most people will likely remember is in the O’Connell Center parking lot near the stadium.

The tailgate has over the years become a place where everyone cares about the children as if they were their own, where many friendships and even a few future marriages would start. But most importantly, it’s where members of the Gator nation can bond over school pride.

They even brought a one-of-a-kind tailgating truck with stadium-style seating. Inside was a TV and a VCR player where Siraj’s 5-year-old daughter, who was too young to care for tailgates, would watch cartoons. “Next thing you know, most [of our group’s] UF juniors and seniors were in the van with her watching Lion King,” Siraj said. “Those people are now in their early 40’s, and now their kids are watching the cartoons [in the truck].”

Siraj has been to at least one wedding where the bride and groom met for the first time at one of his tailgates. They’re still together to this day.

On one occasion, the tailgate hosted a raffle to benefit breast cancer awareness — Siraj said that they raised $10,000 that day. Former women’s Gator basketball coach Carolyn Peck had the honors of picking the winning ticket out of a jar, and someone won a golf cart. But Carolyn Peck isn’t even the most recognized name in attendance. The popularity of the tailgate has grown so much that it has attracted many stars – from former Gator athletes to politicians to the “Florida famous.” Senator Bill Nelson, Kevin Carter, Joakim Noah, Al Horford and Chris Doering have all been guests. Even current Gator athletes have regularly attended.

The night games against Teneseee, LSU and FSU were always the “big-time” tailgates, Siraj said. They even tried to tailgate for a spring game once, but it flopped. Even in the worst tailgate — when Shariq’s three-year-old daughter, Hennah, fell and had to go to the emergency room — one could feel the love, Siraj said. Everyone was equally as worried as he. “People that I did not even know walked up to me later on, off season, and said ‘I know you! I’ve been to your great tailgate,’” Siraj said. “People left their own tailgate and came over because it was more fun to go to Shariq’s tailgate.”

For Siraj, it was just “one big fun party for the Gators and friends.” For all he and his family put into the tailgates, they never asked for a single dollar in return. The “legendary” spot where on any given game day there were at least 150 people, where there were so many people that they decided to cater it themselves and bring DJ’s, is no longer useable today. For next year, they’re thinking of taking up space somewhere around the UF law school.

“I don’t think our tailgate will ever be as big as it used to be,” Siraj said. “Because for all good things, they come to an end.”