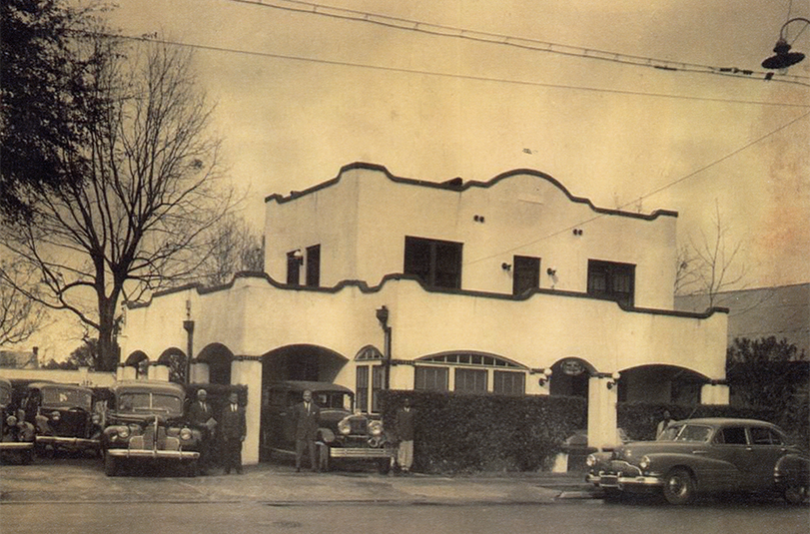 Businesses come and go but many leave behind a legacy within the community that they served. From providing a needed service to assisting their fellow citizens through leadership or donations, these businesses and their owners impacted Gainesville for the better. The Duval Shoe Shop, Mama’s Restaurant, the Cotton Club and Chestnut Funeral Home barely scratch the surface of African-American businesses that have been a part of Gainesville’s history, but they are all unique and provide a window into the city at that time.

Charles W. Duval was a shoemaker by trade and the owner of Duval’s Shoe Shop, which used to be located at 216 East Union Street (now SE 1st Avenue). He was an Alachua County native and, according to census records, grew up at 808 N. Garden Street (now NW 1st Street) in the Pleasant Street neighborhood. His parents were from South Carolina. In 1906 he married Sallie, and by the 1910 census he owned his own shoe repair business. He and Sallie and their family lived at 909 N. Garden Street and occasionally took in lodgers. Duval advertised the Chas. W. Duval Shoe Shop in the “Gainesville Daily Sun” and “The University News.” One ad listed the business near Crawford & Davis’ Livery Stables and claimed, “first-class work done always.”

Operating a successful business at the height of Jim Crow laws was no easy task but Duval persevered. He was a trustee of Union Academy, the premier school for African-American students in the city, and a member of Friendship Baptist Church. He is mentioned in a June 26, 1909, article in the “Gainesville Daily Sun” regarding Union Academy. The school’s patrons had a meeting on the 23rd and one of the points of business was to appoint five members, one of which was Duval, to a committee “whose duty it is to draft, convey and present the wishes of the patrons of Union Academy to the Honorable Board of Public Instruction of Alachua County. The purpose of these meetings and resolutions is to ask that the school be placed on higher ground from every viewpoint.”

Duval died in 1933 and the Duval Early Learning Academy is named for him.

Charles and Sarah McKnight impacted Gainesville’s music and restaurant scene. The 1940 census shows them living at 606 W. Market Street (now 526 SW 5th Avenue) in the Porters Quarters neighborhood. Florida natives, the McKnights founded two businesses that became stops on the Chitlin’ Circuit, the name for the collection of businesses in the segregated south that allowed and encouraged African-American performers wand musicians.

Sarah’s Restaurant, located in the Pleasant Street Neighborhood, was a lunch counter by day and a music club by night. The restaurant served southern home-cooking and hosted jam sessions and bands with integrated musical line-ups.

The Cotton Club on SE 7th Avenue began life as a PX on Camp Blanding during World War II. After the war, it was bought by the Perrymans, who owned a grocery store on SE 7th, and turned it into the Perryman Theater, a venue for African-American patrons. It closed in 1948 and was bought by the McKnights. The Cotton Club was opened in 1950 and played host to such well-known performers as B.B. King, Bo Diddley, James Brown and Brook Benton. The McKnights had worked out a deal with Dr. Lamb, the owner of Club Bali in Ocala, to book the same entertainers, which made it easier to attract big names to both clubs. University of Florida students soon discovered the Cotton Club and began integrating the audience. As a result, the county did not renew its license and the club closed in 1952. The Cotton Club building still stands today and has become a museum and cultural center.

One of the city’s oldest continually operating businesses is the Chestnut Funeral Home on NW 8th Avenue. Founded in 1914 by Charles S. Chestnut, Sr. and Matthew E. Hughes as Hughes & Chestnut Funeral Home, it has provided burial services for Gainesville’s African-American community for generations. Chestnut and Hughes were founding members of the Florida Morticians Association, an organization for black morticians founded in 1924.

Chestnut, the descendant of enslaved laborers at the Kanapaha Plantation, served his apprenticeship at what is now the Williams-Thomas Funeral Home. The business began as Hughes & Chestnut Funeral Home and was among the first licensed in the state. The name changed to Chestnut Funeral Home after Hughes’s death in 1947 when the Chestnut family bought his half of the business. The business has been passed down through the generations and is currently owned by Charles Chestnut, III, and operated by his cousin, Larry Saunders, and his son, Charles Chestnut, IV. The Chestnut family has been heavily involved in the community not only through their business but through their support of the former Lincoln High School and in multiple elected roles within city and county government.

These four businesses have all left unique legacies and thankfully are only a drop in the bucket of the African-American-owned businesses in Gainesville’s history. They have paved the way for future business leaders.

Joanna Grey Talbot is a freelance writer and the marketing director for the Matheson History Museum.