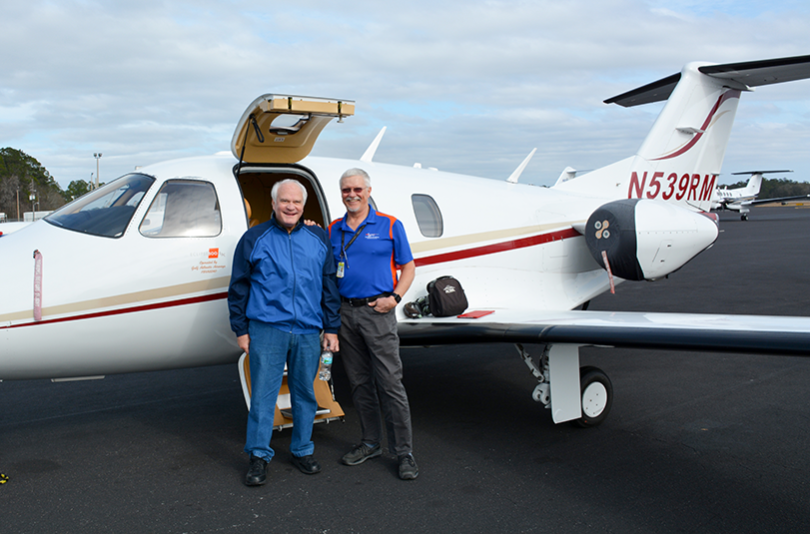 I have had the pleasure of knowing Dr. Mike Lukowski for over 35 years. Although he will humbly deny it, Mike is one of the most talented and accomplished people that I know. Our friendship took an amusing turn in the early 1980s while having lunch together at the “doctors’ lounge” at Alachua General Hospital, Mike cut into his broiled chicken and spewed poultry juices all over my shirt and tie. We have often laughed about that incident since then and, in fact, I brought a coupla’ pieces of fried chicken to this interview with him!

During a stellar career as an OB-GYN in private practice and then as a faculty member at UF, Mike realized his lifelong aspirations to become a pilot. One thing led to another, and Mike, who has never done anything halfway, learned to fly jet aircraft and then became the owner, CEO and Director of Flight Operations at University Air Center (UAC), which handles essentially all the flights coming and going to Gainesville Regional Airport, including fueling the commercial airlines. A big part of the UAC operation is transporting human organs and blood products.

You already enjoyed a career as an exceptional, successful OB-GYN. What interested you in becoming a pilot?

I guess I come by it naturally. My mother had six brothers, three of whom were pilots, and one of whom was a Navy Pilot serving in Vietnam. In my early childhood, I can remember laying in the grass in our back yard, being fascinated by the contrails of the jet airplanes flying overhead, a new sight over the Earth’s skies. Later in my childhood, I built model airplanes of every shape and size. I was always captivated by airplanes.

Lots of physicians fly propeller-driven airplanes. What directed you toward jets?

I began my private OB-GYN practice in l981. I learned to fly in 1987. Seeing a good business opportunity, in 1989 I bought in to UAC, then known as Gulf Atlantic Airways. Knowing that jets were much safer, were taking over the market, and, of course, were much faster, I learned to fly jets in 1997.

So you bought into UAC and were learning to fly jets while you were still actively practicing OB-GYN. How did you manage all that?

Well, I guess I was younger and did not need as much sleep in those days. Also, I had a lot of time to study flying while sitting around waiting for women to have babies! I retired from UF OB-GYN in December, 2016.

What is the status of the company now?

Can you fly the helicopter yet?

No, but I’m going to learn how! We do about a thousand charter flights per year and operate a large fueling operation, but our primary charter business is flying human organs and blood products. In fact, about 90 percent of our flying business is medically related. We also teach flying and have trained many airline pilots who fly for the major airline, as well as many of our own charter pilots. In addition, we have a maintenance shop staffed with about a dozen mechanics that keep our aircraft and many privately owned aircraft maintained.

How did you get into the “transporting human organs” business?

I understand that you fly these organs around the state all night.

Indeed, the majority of our flights are all night. The transplant surgeons generally want fresh organs for their first OR case at 8 a.m. Therefore, we typically may fly during the night to a southeast location and back, procuring organs to be ready at UF or Mayo by 8 a.m. or so. If we get a call to procure an organ, we guarantee that we can be in the air within one hour. We have at least one person staffing our dispatch office 24/7/365 and we have as many as six crews “up and ready” at any time.

Do you have an estimate for how many miles you have flown organs?

I can tell you that we’ve flown a cumulative 5 million miles since 2011!

What about weather? I would think that when organs are ready and waiting, you must transport them.

That’s another nice thing about jets – weather is rarely a problem. We can fly over or around bad weather. But we don’t fly through it! Occasionally the weather precludes even jets from flying.

About how long can various organs survive from the time they are harvested from the donor until transplanted into the recipient?

Are your air speed limits adjusted for these flights?

That’s another thing we love about jets. Above 10,000 feet we can go as fast as the aircraft is designed for, up to the speed of sound. Air speed limits around airports are 200-250 knots, depending on the class of airspace. For instance, when procuring and transporting organs at night, we can be from Gainesville to Tampa in about 20 minutes. Our fastest aircraft cruise at 430 knots (500 mph).

What personnel are typically included in your organ-procuring flights?

The pilot and copilot and the transplant team, which usually consists of one surgeon and one or two organ procurement technicians. Sometimes a fellow, resident, or medical student may accompany the team.

Many incredibly rewarding things have occurred. We recently had the pleasure of flying organs to be transplanted into one of my medical school classmates. We’ve had the distinct honor to fly thousands of organs, saving thousands of lives. We also have our Caravan “cargo plane,” which flies an average of one thousand miles through three states over about 6 ½ hours, flying blood, blood products and lab equipment for Life South Community Blood Centers. This flight occurs every single night of the year except Thanksgiving and Christmas!

We’re very proud that we have the pilots and other employees who very professionally maintain our very difficult and demanding schedules. They have developed a great mutual respect and camaraderie with the organ transplant teams. We are also proud of our mentoring programs. We have had many young people who are interested in flying begin here pumping fuel and then going on to college, learning to fly and becoming pilots and even instructors. We have sent many pilots to the commercial airlines, some of whom are now Captains flying overseas.

Thank you, Mike, this has been fascinating.

Thank you! Be careful with the chicken!

After our interview, we toured the very impressive UAC facilities, hangars, and an array of airplanes of all sorts. Then Dr. Lukowski had a little surprise for us. He proceeded to take us – our Executive V.P. Jackie Owens, her husband Jeff Simms, and myself – for “a little spin” in one of his jets.

We climbed to about 6,500 feet, cruised at a speed of about 300 miles per hour, and marveled at the beauty we could see all around us during our smooth flight. An amazing end to a fascinating day! And, since I’m not accustomed to sitting in the front seat in a speeding jet, perhaps the only chicken involved was me!