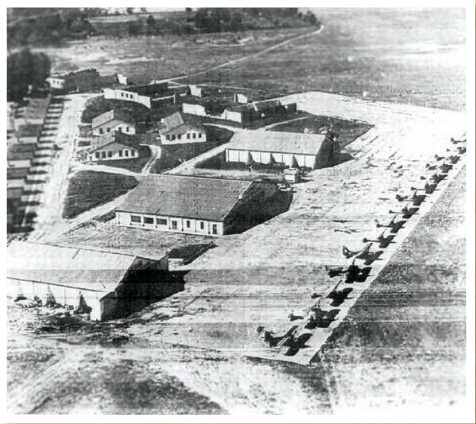 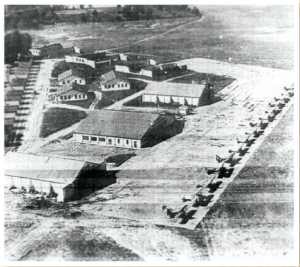 A little over 40 years ago, Carl Stengel opened an airfield in the area known today as Butler Plaza.Picture this scene: you step out of Walmart on Archer Road and realize that you forgot where you parked your car. As you wander up and down the aisles, punching your panic button in frustration, you hear a buzzing sound overhead. In a Jack Finney-esque moment, all of the buildings of Butler Plaza suddenly dissolve around you. You find yourself standing in the middle of an o pen, grassy field. And that buzzing noise? It’s a bi-plane about to land on a runway, which you’re standing directly in the middle of!

It’s not the stuff of Finney’s science fiction. A little over 40 years ago, Stengel Airport occupied the area we know today as Butler Plaza.

BIRTH OF FLIGHT
The world was captivated by flight. In 1927, Charles Lindbergh did the unthinkable and crossed the Atlantic, from New York to Paris, on a solo flight. Air transportation would never be the same.

Carl Stengel bought his first airplane in 1930. Born in Wisconsin in 1905, he showed mechanical aptitude from an early age. Stengel also fell in love with motorcycles. He left his family when he was only thirteen and rode his motorcycle down to Florida.

According to family remembrances, Stengel ended up in Ormond Beach working as a highway patrol. While in Florida, he first learned to fly a plane. In 1924, Stengel leftthe coast and intended to ride to California. But, he only made it as far as Gainesville. The university was having a football game that day, and Stengel was hired by the Gainesville Police Department to help with traffic. He enjoyed the work and decided to stay. He was hired as Gainesville’s first full-time motorcycle patrolman.

Stengel purchased a farmhouse and land northeast of downtown Gainesville. One week, a barnstormer arrived on a Curtiss biplane (a “Jenny,” as they were called) and offered people rides around the city. The pilot wrecked his plane, and Stengel bought it from him and repaired it. Using his cow pasture as a runway, Stengel developed his piloting skills.

GAINESVILLE’S FIRST AIRPORT
Stengel left the GPD in 1937 to operate his flying school, Stengel Flying Service, full time. He built a few cabins for people to stay in overnight and a restaurant to feed them (near the intersection of 39th Avenue and Waldo Road). He became the first manager of the Gainesville Municipal Airport.

With the advent of World War II, the U.S. Army took control of the airport in 1941 and paved the runways so B-25s could take off and land. Stengel purchased 30 acres off Archer Road, southwest of the city, and relocated his flight school operations. He made a living by teaching Army pilots and UF students how to fly. He supplemented this income by flying mail on short runs from Gainesville to Ocala.

By 1943, Stengel Field included three hangars and a number of auxiliary buildings. The runway was a grass strip that ran west-east. At its peak, Stengel’s school had almost 600 students with 38 instructors and 110 training planes. Gainesville’s first commercial airline service flew into Stengel Field in 1945 (the fare to Jacksonville was about $5). Stengel Field offered major repairs and had housing constructed across from the 3,800-foot landing strip.

Curtis Pitts built 10 of his “Pitts Specials,” single-seat aerobatic biplanes, at the airport. One of them was daredevil Betty Skelton’s first airplane, the Lil’ Stinker.

Stories abounded. A pilot tried to land a Piper J-3 Cub in the middle of a tropical storm. The head wind was so strong compared to the 40-mph forward velocity of the plane that he was nearly blown to a standstill in the air. Another pilot crashed his plane into a live oak tree and a house south of Archer Road (near the old Lone Star Steakhouse).

THE END OF STENGEL FIELD
According to his son, Stengel’s dream was to build a string of airports up to Chicago. Following WWII, however, there was a glut of skilled pilots and interest in general commercial aviation tapered. The Army deeded the main airport back to the city, and commercial flights began operating from there. This was the knockout blow; with the Army leaving Gainesville, Stengel’s main crop of students dried up.

He began losing money, and Stengel’s Flying School closed in 1952. He sold the airport to Rowland Stewart, who used the hangars for fiberglass boat construction and repair. Vital Industries, an electronics equipment manufacturer, also used the old classrooms and offices.

The airfield continued to host flight shows into the 1960s and finally closed in 1971. Clark Butler purchased the land and developed the beginnings of the shopping, restaurant and entertainment complex that now bears his family’s name.

But, if you stand in the parking lots and close your eyes for just a minute, you might hear the buzz of a biplane, feel the breeze of a crosswind and imagine another forgotten era in Gainesville history.