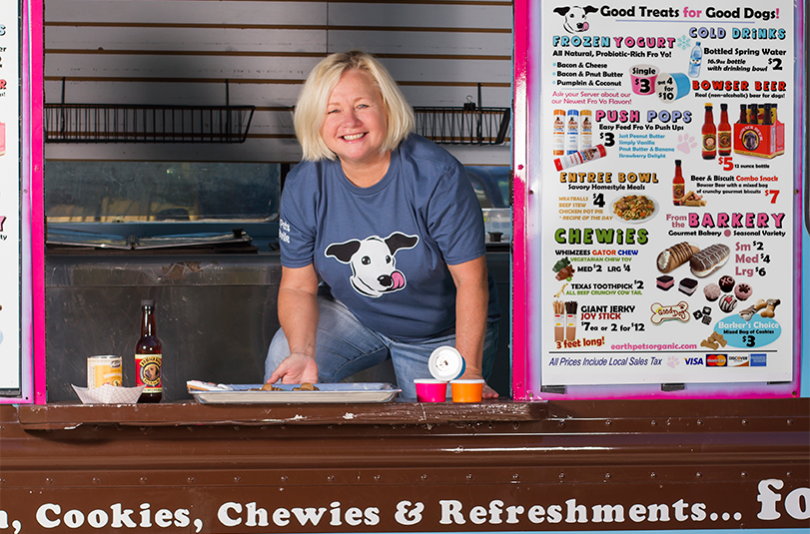 Formerly known as “Moon Doogie,” the ’79 Chevy that now serves as Gainesville’s first and only treat truck for dogs started its career peddling Good Humor ice cream. After a brief punk rock phase adorned in band stickers, the truck was bought in Melbourne, Florida, and transformed into a bright blue, pink and brown treat truck by Joy Drawdy, owner of Earth Pets at 404 NW 10th Ave. in Gainesville, and Paige Anderson, the truck’s full-time driver and chef.

The doggie treat truck idea grew out of Drawdy and Anderson’s collective excitement and care for local dogs and their owners. Whenever the two were out about town and came across animals, specifically dogs, they wanted to give them treats.

“It’s such a happy little thing, that truck,” Drawdy explained further. “Gainesville is such a wonderful place for pets because there’s so many wonderful and responsible pet owners here that spoil their animals.”

The truck provides an experience for pets like no other — not only does it supply treats, but it plays disco and old R&B music, too.

Whether the truck is at a gas station filling up or at a food truck rally, it’s sure to catch the attention of everyone around. The truck, which is in its third year running, has relied heavily on word of mouth.

“People from around the country and sometimes around the world have seen it or heard of it,” Anderson said. “Somebody’s told somebody about it and they don’t believe that it exists… then they drag them back here to show it’s a real thing.”

The truck is its own evolving entity. Every year, it turns into something else and has more uses than before, Drawdy said. You can find the treat truck at birthday parties, 5K events and adopt-a-thons. Recently, pet friendly apartment complexes have been inviting the truck to doggie happy hours for residents.

The truck brightens up the day not only for the animals, but also for all the people who see it.

“I can be cranky, and then I get in that truck and all of a sudden it pops you into a good mood,” Anderson said. “People will come up beside you — they will follow you down the road, waving at you to get your attention and telling you what a great thing it is.” 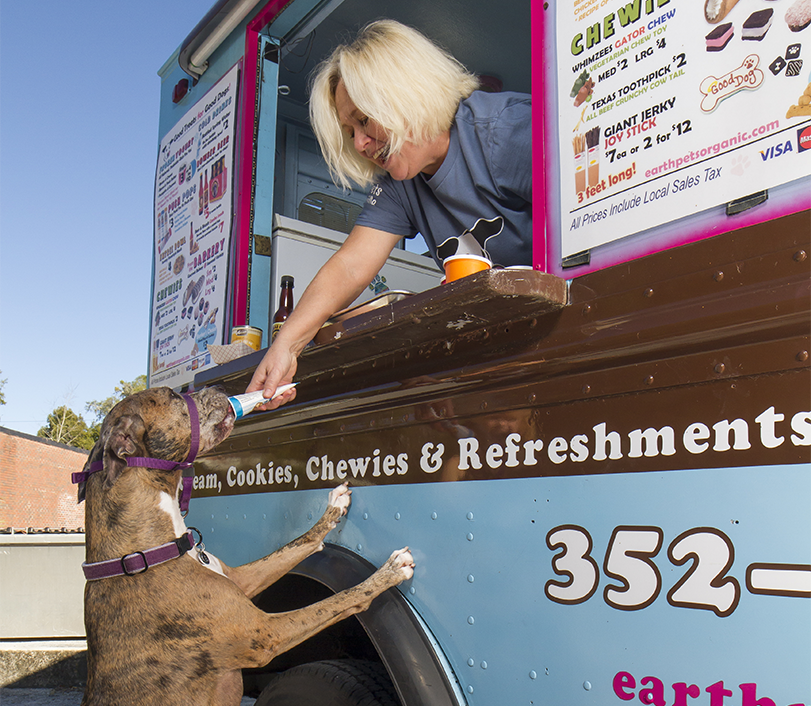 The treats on the truck vary, and they are not only limited to dogs; there are cat treats, too! Humans can eat the treats, but it’s not advised. The treats vary from Bowser Beer, a carbonated beef broth, to Anderson’s homemade doggie ice cream.

Using an ice cream machine that was donated to the store, Anderson makes pint-sized ice cream for dogs. The flavors range from bacon and cheese to pumpkin and coconut. The ice cream is frozen yogurt and made out of 100 percent organic yogurt, which improves a pet’s coat, regulates digestion and is easy on the stomach, Anderson said. For the bacon and cheese flavor, she adds low-sodium bacon, peanut butter and a touch of bacon grease. The pumpkin and coconut flavor uses 100 percent organic pumpkin and coconut shavings, with cinnamon and local honey for an added touch. For special occasions, Anderson even creates her own flavors, such as cookies and cream.

The bakery treats, which are supplied from Bosco and Roxy’s in Canada, are topped with icing made from yogurt and wheat flour.

“Nothing thrills me more than to see [the dogs] eating it and liking it,” Anderson said.

The treats are very carnival-esque — the bigger and weirder, the better. Other than chicken feet and buffalo horns, some of the weirdest things the truck carries are bully sticks, which are treats made from the pizzle or penis of a bull.

Everything on the truck is healthy, even down to the chews, beer and bakery treats, Anderson said. The Bowser Beer, for example, has glucosamine in it, which is good for joints.

“It’s good for [the dogs] to be chewing on something a lot because then there’s a lot of saliva and stuff that’s good for their teeth,” she said.

The truck brings happiness wherever it goes, Drawdy and Anderson both said.

“It’s like a big piece of candy,” she added.