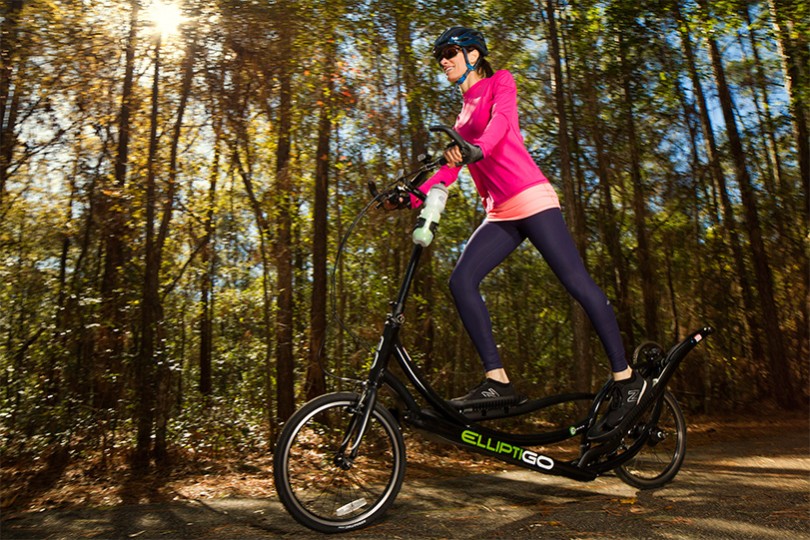 Written by By Samantha Ramirez, Photo by: John Sloan

“What in the world is that thing?”

This is a question Shannon Foley has been asked on more than one occasion while riding her ElliptiGO through the Greater Gainesville area. Foley, owner of EnCore Pilates and a self-proclaimed fitness enthusiast, credits the unusual contraption as a great conversation starter.

“People are always trying to stop me just to ask what it is,” Foley said.

Created in 2010, the ElliptiGO is the world’s first commercially available elliptical bicycle. The bicycle-and-elliptical-machine fusion was initially created as a fitness alternative for those who are no longer able to incorporate running into their daily exercise routines. The two-wheeled mechanism is meant to replicate the outdoor aspect of running while providing the benefits of low-impact exercise. Foley first discovered the ElliptiGO as an alternative to running and cycling after a knee injury prevented her from enjoying those activities.

As a licensed physical therapist and athletic trainer, Foley said she wouldn’t dream of ever going back to a traditional bicycle due in part to both the health and novelty aspects provided by her ElliptiGO.

“It’s one of the most entertaining components of my workout regimen,” she added. “Time flies when I’m riding it because I get to enjoy being outdoors. I especially enjoy the occasional glance from a perplexed observer who then causes me to break into a smile in the middle of an intense interval ride.”

Novelty aside, it’s the health aspects of the machine that truly set it apart from a traditional bike. Its lack of seating, which might scare some, is what makes the ElliptiGO an ideal addition to any fitness enthusiast’s workout routine, Foley said. 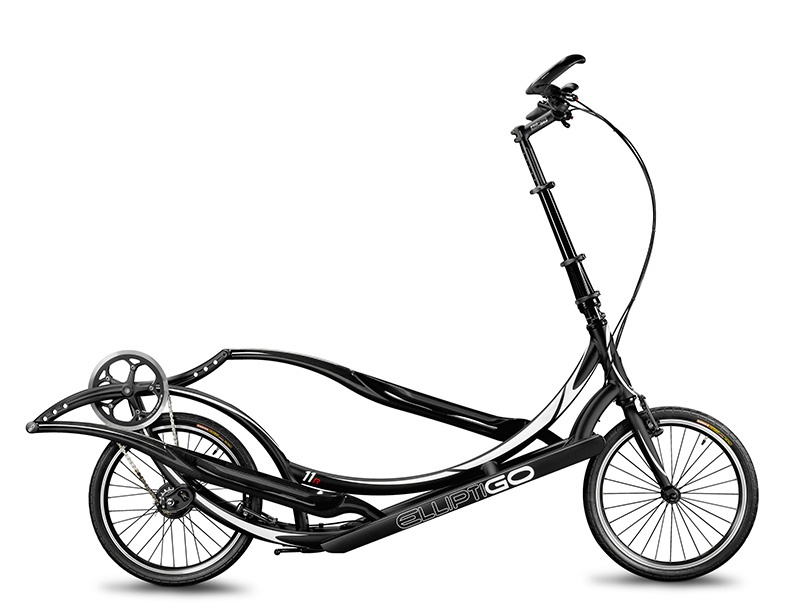 “There’s much more use of your abs and core to maintain balance while you ride,” Foley explained. “This means you need to have a more upright posture as well as an increased use of your glutes and quads, therefore allowing for less stress on your back.”

Along with this, Foley credits the ElliptiGO with opening up a world of outdoor fitness training with a cardiovascular component that is above-and-beyond simply running.

“My joints are protected due to less impact, and my legs and hips get a killer workout every time,” Foley explained. “My knee is always a major concern of mine when it comes to my fitness routine, but the ElliptiGO allows for a significant less amount of stress on my joints compared to a traditional bike.”

Citing smooth, bump-free pavement as the best terrain to ride the bike, Foley has even been able to get her 78-year-old father to enjoy a ride.

“He was able to pick it up rather quickly. He loves it,” Foley beamed.

Safety also plays a big role in the quirky contraption’s appeal. Because of the bicycle’s elevated height, Foley believes she is actually easier to spot in traffic compared to a traditional bike.

“You’re more of a visual standout, that’s for sure,” she said. “It draws attention and makes people curious.” This helps Foley feel secure while riding with her ElliptiGO in traffic.

To transport the ElliptiGO, the company offers a specially designed car rack for the bike on its website as well as new models of the bike that can fold over, allowing for easier travel. Foley, however, can be found riding her ElliptiGO in the bike lane on her way to work or as part of her exercise routine, a task she is more than happy to do.

Are you an ElliptiGO rider? Riders in the Greater Gainesville area who would like to connect with Foley can reach her at [email protected]