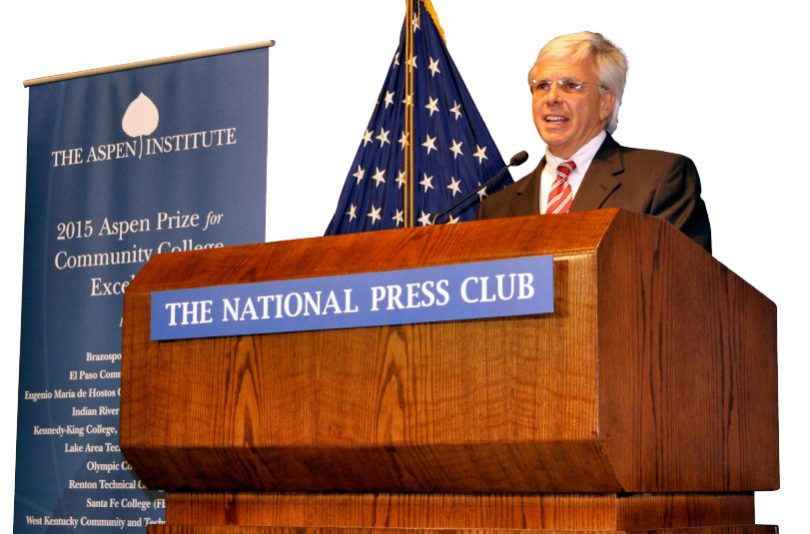 In 15 years, Santa Fe College has grown immensely.We spoke to college president, Dr. Jackson Sasser, about just a few of the college’s accomplishments.

Dr. Jackson Sasser started his career as president of Santa Fe College in 2002, and December 2017 marks the official end of his first 15 years. Since 2002, Santa Fe College has seceived the Aspen Prize for Community College Excellence as the No.1 community college in the nation, constructed a 40,000-square-foot Fine Arts Hall, launched the East Gainesville Initiative and built additional satellite campuses.

To expand access to the college, six new sites have opened since 2002. The Davis Center opened in Archer in 2003, followed by the Watson Center in Keystone Heights and then the Blount Center in downtown Gainesville. Sasser explains that “open access” is one of his important philosophies of education, and each new campus allows them to offer opportunities to students in those areas.

After seeing the disadvantages that some students face when approaching college, Sasser has devoted part of his career to reach students who may not have the same access that others have. That’s why, in 2002, he established the East Gainesville Initiative, an outreach effort dedicated to bringing resources, such as computers, mentors and advising, to disadvantaged students.

While it is impossible to summarize 15 great years, HOME Magazine spoke to Sasser about some of his goals for the college and found that there is one philosophy that drives each development: Sasser holds the students at the heart of all Santa Fe does.

Where did the expansion vision start? Was it an idea before you took over or was it something you felt needed to happen to give open access to more people?

The foundation had in mind a four-corners approach, and we added two campuses that weren’t on the list: Keystone Heights and Alachua. The first thing that had to be addressed was access. We had students where the new campuses are, in Alachua and Starke. As I was interviewing, I got a call from the chair of the board and she said, “We have an opportunity. A donor wants to build in Keystone.”

I asked, “How close is Keystone to Starke?” It was 17 miles, and I said yes. At that time it was a million dollars; Mr. and Mrs. Watson gave $5 million and scholarships, and then we did another building.

Now, because of UF, we serve every county. We get students from every county in Florida. We sort of transformed the relationship with UF. And now with Kent Fuchs, there are even more opportunities. Actually, the provost, Joe Glover, was kind of the common denominator. Joe and I work together, so we have a good relationship with every school at UF. There are students from outside the district coming here who just missed getting into UF, so we’ve expanded access to the two counties we serve and access to the university.

Open access is a thing that distinguishes us. Open access, but not open exit. If you come to Santa Fe, and you’re a strong student, you are impeccably prepared for UF. With the foundation you get, you are impeccably prepared for Princeton or Harvard. Our business is learning, and we have faculty who have committed their lives to learning – not research, but learning. The small classes provide a good environment and prepare students well.

To have both in the same town, a research-teaching institution and a teaching institution, is a rich experience for the community. UF is our best partner; we do not compete. The nine baccalaureate degrees that we offer, UF is not offering or, like accounting, they have signed off on. Because UF graduates go to Boston and Los Angeles or Houston, which (has) left our market desperately in need of accountants. So this January, we offered our ninth baccalaureate degree. The UF dean of the business school signed it, Kent signed it, and the director of the Fisher school, all three signed and support it.

I was not looking for a job when a consultant called in Texas. I loved my college in Texas. Finally, I realized at that age, if I were going to make another move, Santa Fe might be one I would look at. I saw one of the major assets is this great university. I was literally talking to UF before I interviewed. Charles Young was the president interim at that time. I was talking to them about how we could improve, and I didn’t know if the relationship was good or bad.

That deliberate intentional expectation of excellence, that’s really what I want to be measured on. Not just did we get funding, and yes we did, but did students have the best they could have? I saw opening more doors to the University of Florida as a part of that. I see Santa Fe College equal in the areas that are common, like in teaching English, engineering or history. It’s got to be equal, because they are transferring to a major research university.

What did I do to deserve a family in which it wasn’t ‘When would I go to college’ or ‘Would I go to college?’ I didn’t do anything. Our average student age is 25; nationally, it’s about 30. Ours is lower because we transfer so many 18-year-olds to the university. So the median age here is 25, and you’ve got a block of 35-45. Now that they’re coming back, why wouldn’t they deserve the best? The best faculty, the best resources, the best access. I just never accepted that whatever we do should be less than, never contemplated that Santa Fe students would be less than. We have different missions, but what we do, we need to do as well or better in some areas, like the technical fields. Like the Construction Institute, our students work with Alachua Habitat for Humanity. So not only do our students work on a real, live project with the future owners, and the sociology of that is positive, they work with the volunteers within the community.

It’s looking at the resources you have for that critical path to excellence, and you have to get the right people. Who are the right people? Moral. Intelligence matters. Results-oriented. Respect, they’ve got to respect. And in my case, they’ve got to respect the lowest-paid employee, who probably came in last night as a new janitor, to the trustee. That’s the Santa Fe culture.

Like any leader, early on at some point, you had a list of things you wanted to accomplish. How long did it take for you to check off everything on that list?

Ten years. Some we moved on quickly. The college had spotty activities internationalizing, and within a year, it was full-blown. Now it is a national model. We internationalized the college and the whole concept behind that is: so you’re coming to a community college, why wouldn’t you know different cultures, different values, different religions, different foods? Because that’s the world these students are going in.

My first convocation, I said, I would love for every semester, every course to relate whatever you’re teaching to international affairs. One woman said, “Well, I teach welding.”

Guess where the machines were made? Germany? China? Faculty leads a college, and until they accept it, and convey values and information – regardless of what it is – to students, it doesn’t get done. So the joy I’ve had in 15 years has been because I get that.

How does a college take the lead in achieving a one united community goal where every child can graduate high school and get the career of their choice?

I’m trying to answer your question, how does a college (do it)? It doesn’t do it, and there’s no way to do it. This great university, the school district, Superintendent Clarke, (all) understand this issue. Previous superintendents have understood this issue, but something has got to be done.

That’s the saddest thing in America, the saddest thing in Gainesville. In Bradford County, there is that difference in the school district, a child who comes in that doesn’t have a textbook, doesn’t have newspapers, no discussion of national affairs. And then they step into the school experience significantly behind. What the college can do is find those places. Now, what are we going to do about it? A person has dignity who has a job that would sustain a life. We have got to grow jobs in the community.

One of our best assets is obviously our students, and they are one of our liabilities when it comes to local residents. Who gets the part-time job? It’s the student. It’s quite a paradox that we have here, so we have got to aggressively grow non-competing jobs.

With the resources that we have, we need a laser-focus on equity starting in the school districts. First through fourth grade, because that’s when the patterns set. Actually, it’s pre-natal, with brain development. It will take city managers, it will take UF, the chamber, Santa Fe, the hospitals, all the major industry drivers here to set goals.

Like I said, what would it be like if we hadn’t raised the issues? But it’s still so far behind. 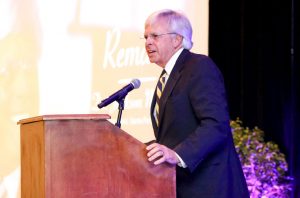 With all the science, mathematics and engineering, you have dedicated time and effort and resources and talent to keeping arts as a priority. How do you see that going forward, as more and more focus is being spent on the science and technology side, how do you keep that in the equation?

In education, not just higher education, we put things in boxes. It’s the old German model. If you teach welding, why would you go see an opera? That is the most discriminating thought you could have. What did I do to deserve parents who made me take piano? My mom never would, but my dad after three years finally said, “If you’re not going to practice, I’m not paying for this.”

But it introduced me to an area and an enjoyment that nobody else can take from me — classical music, opera, all kinds of music. When I see somebody else enjoying music — even when it’s rap, which I don’t get, but that doesn’t mean it’s wrong — when I see somebody else enjoying that, I want to know about it. Double negative intended. It’s a part of education; I can’t stand not to know. It’s that insatiable intellectual curiosity that doesn’t rest, so I want that. And as long as I’m here, we will continue to grow that.

The Arts are a fundamental part of education. It’s that part that everybody can have. Within each of us is the need to create, and all the arts are is tapping that and exploding it into something you enjoy. Creating is not about somebody else approving. It’s about expression.

These are just some of the initiatives Sasser has implemented to ensure that each student receives the necessary resources to succeed in the world. The past 15 years have seen an immense change in the access provided to students in disadvantaged areas and the East Gainesville Initiative continues to grow to this day.