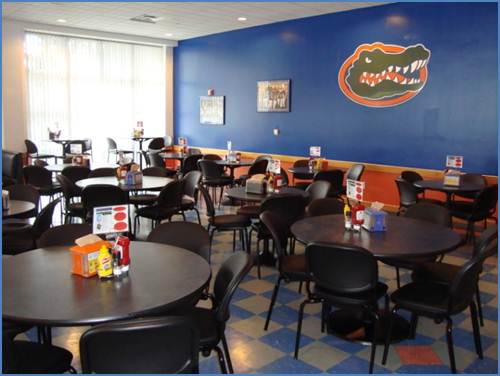 In 1988, Nike’s “Just Do It” campaign featured a simple yet effective message—one that resonates to this day on fields, tracks and courts across the world.

But there is more to building an elite athlete than “just doing” anything. A great deal of science and research goes into every aspect of an athlete’s training program, from stretches and drills at practice to pre-game and post-game routines. And mealtimes are no exception.

“A team approach with the strength coach, dietician and athletic trainers is integral to an athlete’s time at UF,” said Sarah Snyder, Director of Nutrition for the University Athletic Association, who added that UF is one of only six schools in the nation with two full-time nutritionists to serve student athletes. “We have solid communication with those people to make sure that athlete is getting everything they need to reach whatever goals they might have.”

For the members of the football team, this quest begins in early January with a visit to the Bod Pod, a chamber that measures the density of an athlete’s body and then plugs the information collected into an equation to compute his body fat percentage and determine his metabolic rate.

Once this information is gathered, the player’s physical goals are set. These goals vary depending on the athlete’s positions and current status. A wide receiver might want to lean out—that is, lose fat and build lean muscle so he can be quicker and lighter on his feet. Or perhaps an offensive lineman just out of high school needs to bulk up by 20 pounds in order to compete at the collegiate level.

The offseason – from early January until August – is dedicated to achieving those goals, while the remainder of the year focuses on goal maintenance during the regular season. Within those time periods, the nutrition staff makes adjustments to reflect the activity level of the team; for example, two-a-day practices over the summer require increased amounts of carbohydrates, electrolytes and fluids to battle the heat.

With widely varying objectives throughout the team, Snyder and fellow UAA nutritionist Kelsee Gomes must implement a nutrition plan flexible enough for everyone. It starts with the Gator Training Table, a dining facility located in Gator Corner that is open exclusively for student athletes. A buffet style spread includes three protein choices, three carbohydrates and three vegetable options every weeknight. Foods on one side of the buffet are choices conducive to the leaning out process, while the other side includes heavier food for athletes looking to gain or maintain weight.

Variety is key to meeting the different goals, as well as pleasing different taste palates. The facility also includes an “action station,” where athletes can order custom stir fry or pasta dishes, and sometimes a carving station is also available. Every Wednesday is Sushi Night, and occasionally crab legs will make an appearance. When the team is on the road for away games, the UF nutritionists utilize the hotel kitchen and resources to maintain dinnertime menus as closely as possible to what the athletes eat on campus.

The objective is to strike a balance between the players’ nutritional needs and their enjoyment of eating to ensure they take in what their bodies need.

“A lot of the input for the menus I get from the athletes, and I try to put a healthy twist on it,” Snyder said. “With some of the football players, southern-style cooking is popular—collard greens, macaroni and cheese, fried chicken, mashed potatoes. So I make healthier versions. I’ve made mac and cheese with whole wheat noodles and low fat cheese. If we do fried chicken, we’ll oven fry instead of deep-frying. We try not to completely destroy the taste they’re accustomed to, but we add a healthy spin on it.”

Proper nutrition, however, is a 24/7 job for the athletes, who are encouraged to eat every three hours and hydrate themselves throughout the day. This helps not only to avoid cramping, but to aid the body in recovery after a workout. Every UF team has a fueling station conveniently located for their sport (the football team’s station is at Florida Field.) At the fueling station, athletes can pick up shakes, trail mix, fuel bars, water, Gatorade, chocolate milk and other items to be consumed on the go.

Senior offensive lineman Jonotthan Harrison credits the guidance from the UF nutritionists as a pivotal reason for his success. Harrison has played in every UF football game since 2010 including 27 starts, serving at center and left guard to become an important component in the Gator offensive line.

“I have learned that proper nutrition and hydration are crucial when attempting to improve my performance as an athlete and increase my overall health. Without this knowledge, I would still think certain eating habits were acceptable, when in reality they have the potential to offset two workouts,” he said. “It’s the same with hydration. It’s not possible to rely on hydration a few hours before an athletic performance. The hydration that takes place on the days leading up to the event is just as important.”

As strict as this culinary life sounds, Snyder and Gomes encourage the athletes to use their own discretion to enjoy themselves in moderation. One way they do this is through what she calls the 80/20 rule, in which 80 percent of the time is spent eating healthily while 20 percent can be used to cheat a little on their meal plans. This could mean sticking with good habits Monday through Friday, and then having a couple of “cheat meals” on the weekend. Some athletes vary the proportions a little, relaxing to a 70/30 combination or perhaps sticking with 90/10 if they know that scouts are coming to see them play.

Snyder finds, however, that incorporating variety and creativity into meal options helps keep the athletes on track.

“In working to accommodate a variety of tastes, but with the variety we have we’re actually able to do so. There’s such a diversity of athletes there that if one athlete isn’t into one item, another athlete will pile it on his plate,” she said. “It’s interesting to hear someone say they didn’t like the food that day, because I can say, ‘Well if you don’t like anything here, there’s an action station over there that you can check out.’

And sometimes, the mealtime innovation comes from the athletes themselves.

“I’ve seen guys make sandwiches and put sauces on them and be fine with that,” she said. “Some of the guys are very creative!”