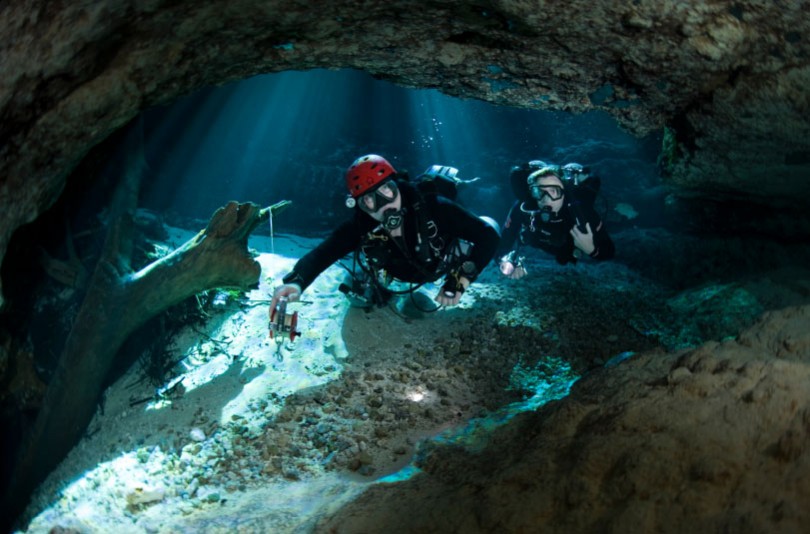 Just a minute’s walk from Ginnie Springs in High Springs, Florida, lives one of the world’s greatest experts on cave diving and underwater exploration. Jill Heinerth has dedicated her entire life and career to the springs through her photography; filming shows for PBS, National Geographic, and the BBC; and authoring nearly a dozen books on var-ious topics related to diving and underwater videography.

Inspired as a child by TV shows like “Jacques Cousteau,” Heinerth’s first diving experi-ences were exploring ship wrecks in the Great Lakes near her hometown of Toronto, Can-ada. Life eventually brought her to the Cayman Islands in the Caribbean and then finally to Florida for it’s abundant underwater caves and springs.

“It’s the mecca for cave divers on the planet,” Heinerth said. “There’s no other place that has so many remarkable clear freshwater springs, and I think a lot of Floridians don’t even know what a precious and rare resource it is.”

People come from all over the world to dive the caves at Ginnie Springs, which Heinerth believes is the most popular cave dive on Earth.

“If you go to the parking lot at Ginny Springs at even 9 o’clock in the morning and you start talking to people, you’ll see that most of the cave divers are from other places,” Heinerth said. “You will hear eight or 10 languages being spoken in the parking lot. Peo-ple come here and stay for months, from places all over the world.”

There are over 200 springs within an hour of High Springs, and each one has its own unique animal inhabitants. Heinerth recalled a recent encounter with a manatee during her first free diving class at Fanning Springs: “I swam underwater my whole life, but I never had a proper free diving class. The very first day of my free diving class, I took my in-structors [to Fanning Springs]. We jumped in the water, and this manatee came sort of under the dock area into the main spring, like if it was a puppy — it was galloping to-wards us,” Heinerth laughed. “The first thing he did was just latch his flippers around my ankle and rub his face on my fin. As we practiced some swimming underwater while holding our breath — a technique called dynamic apnea — the manatee would swim be-side us and race us across the spring. It sort of felt like a pet dog, chasing us around the spring. It did this for three hours! We got tired and got out, and the manatee, I swear, was like, ‘Don’t leave!’ We try and stay back and let [the manatees] live their own natural lives, but they’re very curious creatures. I suppose in this case, he was a little lonely and was looking for some companionship. It was a beautiful thing.”

The springs in Alachua County are home to many creatures in addition to manatees, in-cluding gar, eels, shrimp, alligators and turtles. The Santa Fe River in particular is a bio-logical hotspot for turtle diversity in North America, Heinerth explained.

The underwater caves themselves are also full of life.

“Underwater in Florida caves is not devoid of life — a lot of people think that,” Heinerth said, adding that among the creatures found are the albino cave crayfish, rarely found be-cause of their often isolated habitat. Cave diving also occurs in complete darkness, so see-ing these types of creatures often requires a trained eye.

“These tiny cave-adapted crustaceans are white albino with absolutely no pigment (and) no eyes,” Heinerth said. “These animals live out their entire life cycles in the complete darkness of the cave environment, in this really food-scarce environment.”

After a lifetime exploring bodies of water across the globe, Heinerth has a deep apprecia-tion for their role in our planet’s overall health. It’s extremely important to protect Flori-da’s one-of-a-kind springs and wildlife, she stressed: “Everything we do on the surface of the land drains down into the springs. And when you’ve seen how beautiful they are, you’ll want to protect them… and that’s really, really important for everybody’s future.”