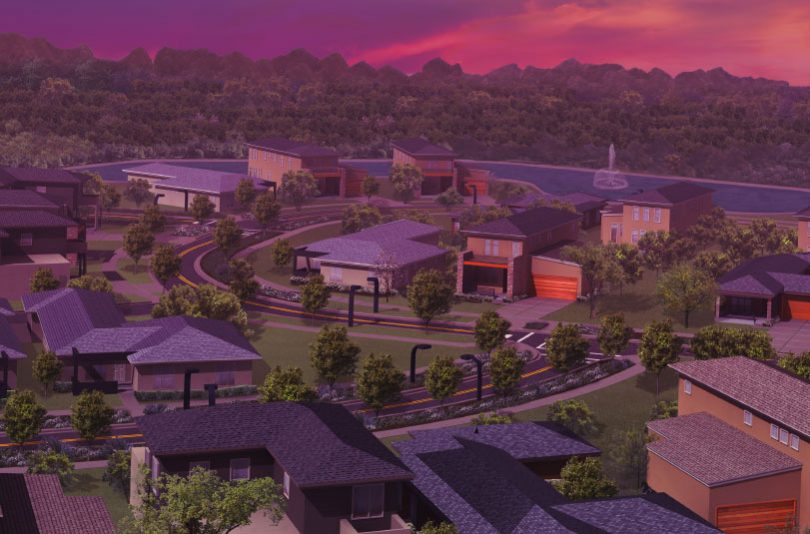 The Heartwood neighborhood on Southeast Eight Avenue represents more than 34 new homes. It is an investment in a part of Gainesville that has historically been underserved, a catalyst for development and hope.

Southeast Gainesville is in the midst of a long-overdue renaissance.

It began with Depot Park, a $5.9 million project that opened in the summer of 2016 after years of planning and postponing, and it continues with the Heartwood community, which is set to begin construction in early 2017.

Like Depot Park, and indeed like much of Gainesville’s east side, there are two ways to tell the Heartwood story.

The first way is straightforward: a nuts-and-bolts tale of a new housing development being built on Southeast Eighth Avenue. In this telling, there are many important facts and figures. For instance, the City of Gainesville bought the land for $1.95 million in 2007 as part of its Southeast Gainesville Renaissance Initiative, but the plans to revitalize the area were held up for various reasons, including the Great Recession of 2008.

Nearly a decade later, the city — along with the Gainesville Community Redevelopment Agency — is making good on the initiative, with plans for 34 single-family houses and a revitalized Cornerstone office complex nearby. The complex will house Merieux NutriSciences, a multinational food safety and quality corporation. The company is expected to bring 75-100 jobs to the area in the coming years.

“You’re going to have a nice modern neighborhood development right next to an expanding economic hub in an area that has not seen that kind of investment for a long time,” said Mayor Lauren Poe.

CRA Project Manager Michael Beard added, “We’re in the permitting stage for the site work — that’s all the roads, all the utility, infrastructure [and] wetland mitigation. It’s extremely exciting to be able to bring new houses to an area that hasn’t had them in over 10 years.”

This version of the story also includes architectural details. There are several design options, including a three-bed, two-bath house with a red brick and stucco façade or a two-story, four-bed, two-and-a-half bath house with wood and brick accents. There is also the boon Heartwood will offer to local contractors and builders, who will soon compete for the available jobs.

There is, however, that second story, and to tell it requires a bit of history and a willingness to be frank about race and class in America. Heartwood is, according to CRA Director Sarah Vidal-Finn, “a loaded site,” meaning that there is “a huge narrative around it.” Part of that narrative involves the history of Gainesville’s east side.

Gainesville, like most cities in America, still bears the pernicious imprint of racial segregation. Persistent economic and social disparities separate the east and west sides, with Main Street acting as an unofficial line of demarcation dividing the traditionally black east side from the traditionally white west side. A 2011 report from the U.S. Census Bureau found that Gainesville had the fifth-widest income gap in the country, and much of that gap was due to the east-west division.

“The eastside district is one of our poorest districts,” Beard said. “For us to be able to pull off two projects of this magnitude, I think it’s huge for the area, and I think it speaks to the level of hope we can expect for East Gainesville. This is the future of East Gainesville.”

Another part of the narrative described by Vidal-Finn involves past attempts to deal with those disparities. Heartwood will be built on the site of the old Kennedy Homes apartment complex, a government project built in 1968.

Like its big-city counterparts — infamous housing projects such as Cabrini-Green in Chicago or Magnolia Projects in New Orleans — Kennedy Homes began with good intentions to address racial inequality in housing, but it became a trap that predominately ensnared low-income African Americans. By the late 1990s, it had degenerated into a slum marred by poor maintenance, violent crime and hard drugs.

Accidental fires in 2000 and 2003 forced residents out of their homes, and all hope of returning crumbled after bulldozers razed the charred remains in 2007. The city bought the site with plans to make it more than just another shell of the American Dream, but those plans were held up for so long that it wasn’t certain they’d ever come to fruition.

That’s one reason why both Heartwood and Depot Park are noteworthy — they represent major investments into a community that has been historically underserved, not just in Gainesville but also throughout the country at large. 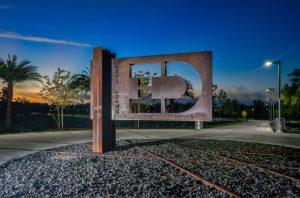 Doris Edwards is a witness to that history. A lifelong resident of Gainesville, Edwards was born 70 years ago in a little wooden house on Southeast First Place, near where the Acrosstown Repertory Theatre stands today.

“There are so many connections in my life to East Gainesville,” she said. “The Depot Avenue area that is now so beautiful, up through the Porters Community — it’s unheard of from the old dusty road that used to go through there with the little broken-down wood houses. I’ve seen so much change. It totally floors me.”

Edwards now lives in the Lincoln Estates neighborhood, which is adjacent to the Heartwood site. She has spent her life working to organize and improve her community, serving with the Southeast Gainesville Renaissance Initiative and directing a neighborhood watch, among many other endeavors. When she heard about the Heartwood development, she organized “vision workshops” to garner support from people who viewed the new site skeptically.

“Every time there’s a vision of something that’s going to add value to East Gainesville, I start motivating people,” she said. “We’ve done it for so long, though, people forget that something can happen because things have failed so many times. When they first talked about Heartwood, there was opposition. People said, ‘Why are you going to build homes that are out of our price range?’ I explained to them [that] once this is built, it will bring funds to your area that can be allocated to give you a boost economically. When people hear someone they know and trust explain specifics, they get it. Now, some of those people understand that they can even own a home because of the way it’s being set up.”

Vidal-Finn hopes Heartwood will promote homeownership among the people who were displaced by the Kennedy Homes fires.

“We want it to be accessible,” she said. “We want people to be able to move back who were displaced. There’s a lot of emotion around this place. The deal is, we don’t do ‘affordable housing’ — we are more interested in long-term home ownership. We want people to move and live and create and sustain the fabric of the community.”

Edwards isn’t sure that will happen quickly. As she notes, people who have spent their lives in apartments often have difficulty transitioning to homeownership.

“They will have to learn about property values and about homeownership, equity [and] curb appeal,” she said. “These are things a lot of people don’t know that don’t own homes.”

These problems aren’t insurmountable, but they are frustrating reminders of how difficult it can be to create economic development that reaches those most in need.

Vidal-Finn said the CRA has taken great pains to make sure Heartwood does just that. She is quick to note that the development is neither an attempt at gentrification nor a half-hearted try at tossing money at a problem with no real community engagement. Rather, it is an effort to revitalize the area for the benefit of its current residents.

“We spent a lot of time with the community finding the right name, one that would signify something new but also the history of East Gainesville and the pride and the heart of that area,” she said. “Then, we also wanted to find out what the existing community wanted there. Our work is deeply rooted in making sure what we do is in line with the community’s desires. You have a site that has a lot of meaning to people. Many, many lives were affected in good ways and bad ways. We put effort into honoring the history of the community.”

Part of what makes Heartwood so promising — and what separates it from past government action like Kennedy Homes — is the effort to draw businesses to the area through the Cornerstone office complex. The CRA understands that improved housing can have an impact only if the economic reality of the area also improves.

“I hope it is the catalyst for more development in East Gainesville,” Beard said. “I hope that some of the developers in the west side of town will see this as a beacon to see it is profitable for us to develop there — there are people who want to live in East Gainesville.”

Vidal-Finn echoed that sense of hope.

“It’s an honor to be able to make a long-term dream come true for the eastside community,” she said. “I think it’s just the beginning of a whole bunch of special things that are going to happen.”

Edwards said it is “a blessing for some of us older people to see this.”

“I am super excited,” she said. “The Heartwood subdivision will add aesthetics and something beautiful to your eye as you drive or walk by. When you couple that with the Cornerstone, bringing some development that’s needed, it will be utilized up to its max.”

Edwards is quick to credit the City of Gainesville with making the project possible, but Poe said the kudos go to the CRA and community members like Edwards.

“So many people have made this a reality,” he said. “For me, this is what we are supposed to do. This is the role of government. Maybe sometimes we give government a bad rap, but I believe this project is just one example of the great work that can be done if we work together. It’s a testament to what can happen when you have a commission and a city government that stays focused on their mission and doesn’t allow hurdles to deter you from the ultimate goal.”

For her part, Edwards is optimistic. She knows how long social change takes and how hard it is to achieve. Yet, she also knows how much is possible. Growing up poor and black during the height of Jim Crow segregation, she watched her grandmother eke out a living ironing clothes for the affluent.

“She’d bring home their old clothes they didn’t want anymore, and they were new clothes to me,” Edwards said. 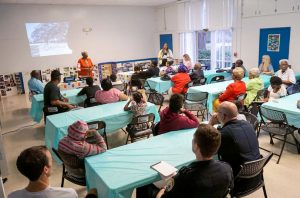 She watched her mother work three jobs, refusing welfare because she feared the government would try to split up her family. She watched the Kennedy Homes go up in 1968, and she watched them come down 40 years later. She watched Depot Park planned, postponed and finally constructed. Now, she’s getting ready to watch Heartwood break ground after being planned and postponed for nearly a decade.

Through it all, she never stopped pushing, working and fighting to make life better for herself and her community. She knows that hope is not a feeling; it is an action.

“I’ve been to so many meetings, I could probably get an honorary degree,” she said, laughing.

And at last, we arrive at the real reason the first version of the Heartwood story was incomplete: it only dealt with what the development cost. Doris Edwards knows, perhaps better than anyone, what it’s worth.

“This is a vision that we’ve had for a long time,” she said. “For me to see this come to fruition, you just can’t begin to understand.”