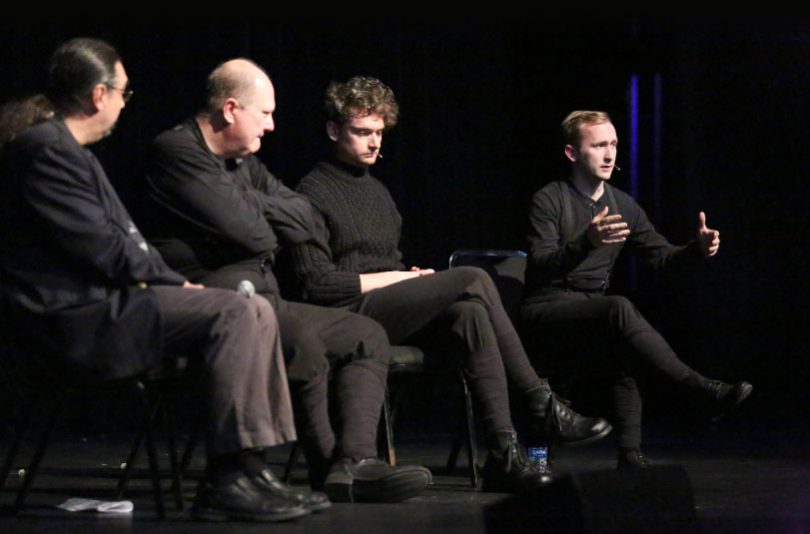 The light falls upon the men on stage as the rich sound of their voices fills the Curtis M. Phillips Center for the Performing Arts.

The show is “All is Calm” and it is not your typical Broadway production. This is the story about the days leading up to the Christmas of 1914, when soldiers during the Great War defied commanding officers and called an unofficial truce. The singers tell the story through the songs, journals and letters of the men who experienced this extraordinary event firsthand.

And while most people are familiar with the shows brought to Gainesville by the University of Florida Performing Arts, many probably do not know the extent of the university’s outreach.

Throughout the year, there are opportunities for patrons of the arts to treat themselves to some extra perks. For example, prior to the “All is Calm” performance, visitors enjoyed a welcoming dinner held in the Squitieri Studio Theatre. For this event, guests gathered in the darkened theatre, illuminated by strings of Christmas lights, for a buffet dinner provided by Blue Water Bay.

For select performances, limited tickets are available on a first-come first-served basis. Having dinner provided before the performance was a lure for those not wanting to worry about being late to the show. Patrons mingled, enjoyed music and drinks, and got the inside scoop from members of the UFPA staff.

People really enjoyed the ambiance and the food.

“I’m excited about the dinner!” one patron exclaimed. “It’s delicious.”

Another couple had taken a shuttle bus from the Village at Gainesville, a senior living community. They were delighted to enjoy a tasty meal prior to the show.

Immediately after dinner there was a brief lecture and Q & A session by Paul Ortiz, director of The Samuel Proctor Oral History Program at the University of Florida. It was standing room only as Ortiz recounted the history of the 1914 truce. People asked questions and Ortiz offered historical perspective.

“Brace yourself,” Ortiz told the audience before the show. “Open your hearts. Open your minds.”

“This was delightful tonight,” Charles said immediately after the show. “Brian Jose [UFPA Director] has been able to bring us a great variety of shows and I’m really excited. What a great time of the year to hear something like this! It was very moving and very emotional. What a great message. Another great show!”

A good part of the audience left after the performance, but those who stayed were treated to a unique opportunity to interact with three of the performers. Ortiz moderated this question and answer session.

“There are so few plays like this, because, especially in Gainesville, which is such a liberal town, there’s always a divide between this conservative-type culture and the liberal arts, so seeing something like this that can bridge both is really not only unique, I think, but for me it’s actually a treasure, because I never get to see anything like it,” Truax said after the questions and answer session. “Keeping in mind, I’ve been around – I’m probably closer to Beetle Bailey than Audie Murphy – but I’ve been around and, watching it, I would almost say I felt like I missed probably close to 15 to 20 percent of it because my brain was flashing back to what was going on. In some ways I can relate – I know towards the end, they do the General speech, I kind of lost it.”

Bringing this kind of outreach to patrons of the arts is something UFPA Education Coordinator Derek Wohlust takes to heart – especially for the children.

“When I was in second grade, I don’t remember anything about school except for this string quartet that came to play,” Wohlust said. “I remember that.”

Wohlust said outreach begins during contract negotiations with the agencies, by throwing ideas at the artists to see what they are comfortable doing.

“A lot of artists are really enthusiastic about education and reaching out to kids,” Wohlust said. “My focus is elementary school, because that’s when it starts. So I’m hoping that when we do these events for the kids, they stick.” 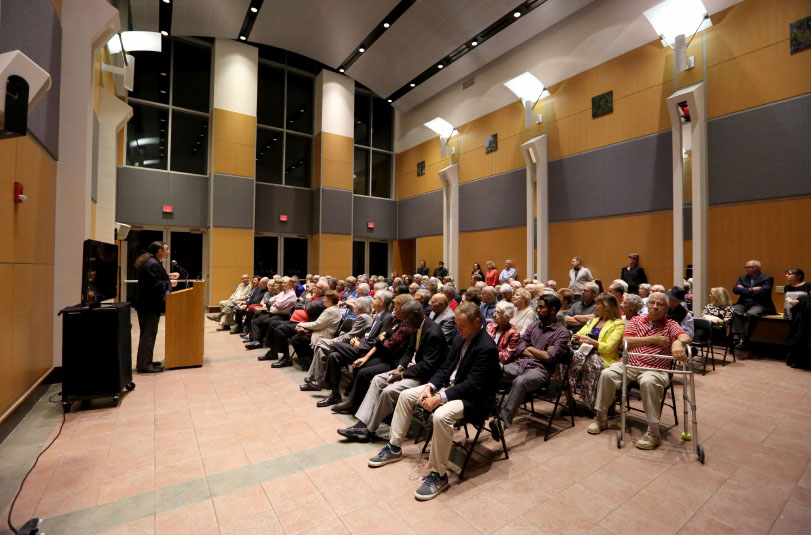 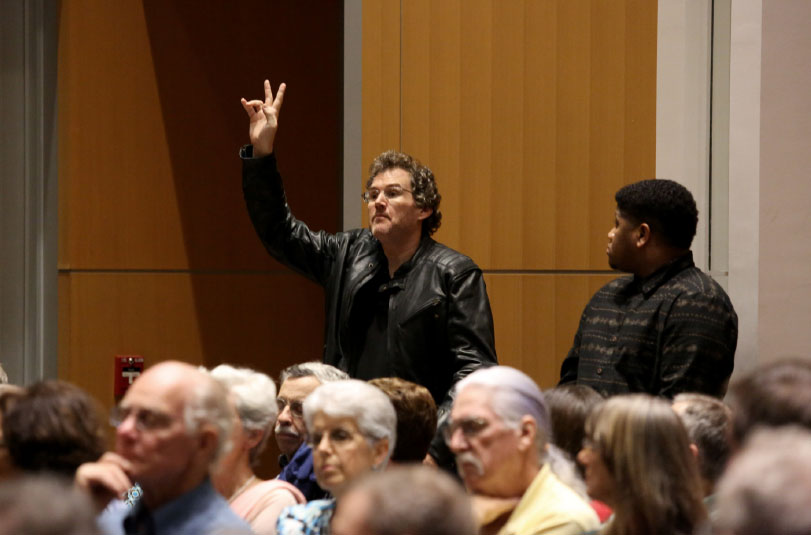 Veteran Eric Truax asks a question after the lecture.

This enthusiasm for education paid off the day after “All is Calm” when the UFPA brought Wynton Marsalis and the Jazz at Lincoln Center Orchestra to the theatre for an evening of rousing holiday standards performed by world-class musicians. For this show, Marsalis had special guests Catherine Russell and Kenny Washington. The two veteran performers sang along with 15 of the finest soloists, ensemble players and arrangers in jazz music today.

As if this wasn’t special enough, prior to the evening’s performance the theatre opened its doors to educators and student musicians so they could observe the orchestra’s rehearsal and sound check. Students ranging from college to elementary school were invited to this behind-the-scenes experience as the band worked out some kinks, and the sound engineers worked their magic. The students sat with rapt attention, often gasping in astonishment as these seasoned musicians whipped through some tunes.

After the rehearsal, one of the band members, saxophonist Ted Nash, stayed to chat with the young musicians. There was no shortage of eager hands thrust high into the air from the students wanting to ask questions.

“What do you think of when you’re arranging?” one student asked.

Another asked, “How do you approach the musical language of improvisation?”

Zack Chester is an adjunct professor in the UF Jazz studies department who was in the audience for both the rehearsal and, of course, the show later that evening.

“It’s a really great opportunity for kids to get to listen and ask these questions and hear a really good band,” Chester said. “A mature band.”

In addition to the younger students, University of Florida jazz band members were in attendance asking questions, along with their director, trumpeter Scott Wilson.

“One of the things I’m really excited about is just that the Phillips center is doing this,” said Wilson, who heads the Jazz Studies Program at UF. “It’s an incredible opportunity and I think as they do it more we’re going to figure out ways to really interact with all of these incredible artists that are coming. They’re putting in the legwork to get it done and it’s a very unique opportunity. I mean, normally you would never get access to these people that are coming in.”

Ben Grier is a tenor sax player with the UF jazz band. He was grateful for the opportunity to interact and observe commercial musicians who are making a living in music.

“It is priceless to be able to talk to them and to get some insight into what goes through their minds every day, what their processes are,” Grier said. “You listen to them on records and they’re so inspirational but you don’t know what goes through their mind. You don’t get to talk to them through the CD. So, like Scott said, it’s just priceless and really awesome that the Phillips Center is bringing them here because that provides an opportunity for us to create some dialogue, with at least one of the players. That alone is just super priceless. A lot of insight is there.”

“Stuff like this – anyone who comes through town when [these events happen] – after the show I just go straight into the practice room,” Alvar said.

UF tenor saxophonist Dustin Furguson said that there are so many shows at the Phillips Center that it’s sometimes hard to pick and choose which ones to attend.

“When I saw this come across, I was like, OK everything else can wait, I’m going to come here. I’m going to hang out. I’m going to get my tickets early. It’s where people are going to be, it’s where you gotta be,” he said. “Especially for people like us; especially the kids that are in the band that want to do this stuff. This is where you have to be to make the connections, for people to see your face, that you are in the audience. It’s just like Erik was saying, you just want to go right into the practice room. It motivates you. We listen all the time, sure, but hearing it live? Like this? To be here in the environment is completely different and it really pushes you to want to be at the next level.”

Chris King, in his second semester, is a relative newcomer to the UF jazz band but he’s been following the Jazz at the Lincoln Center Orchestra since middle school.

“Getting to come see this really is special since I haven’t gotten to go up to New York specifically to see Lincoln Center – and whenever I have been up there they’ve been gone or on tour, so getting to come and see all the guys and getting to talk to Ted is really a cool experience,” King said. “They’re people. They’re not just an icon that is a great musician and everything but they’re also nice people to talk to. It’s really special to get to not only hear them live, but to meet them. It really goes to show that a big part of being a musician isn’t just being a killer player but it’s being a nice person, because that’s how you get hired. It’s not necessarily just how great you are but also how much people like you. So it’s definitely been a special experience, and I hope maybe we’ll get to meet a couple other band members if possible. I’m looking forward to the show tonight.”

Derek Wohlust said that while the UFPA likes to focus on reaching the elementary school students, there’s a lot to be experienced by older students, as well. When UFPA brought in the Cuban dance group Malpaso, they held a master class with college students from UF and Santa Fe College.

“My favorite thing is to take artists out into community,” Wohlust said. “When we had the Diplomats of Drums, we did a popup drum circle at the Bo Diddley Farmers Market. We just showed up and did it. These guys are from Malaysia.”

They also brought the Nobuntu African Choir to UFPA and invited every elementary school in Alachua County to come, Wohlust said.

“Elementary school kids got to see Nobuntu,” he said, “the first to see their public performance in the United States.”

Scott Wilson said he is looking forward to what’s to come, wanting to see how they can do things even better next year.

“Maybe we can reward some season tickets to an outstanding jazz student who then gets to come all year,” he said. “And they’ll bring friends and we’ll figure out ways to really interact with artists. It’s so exciting.” 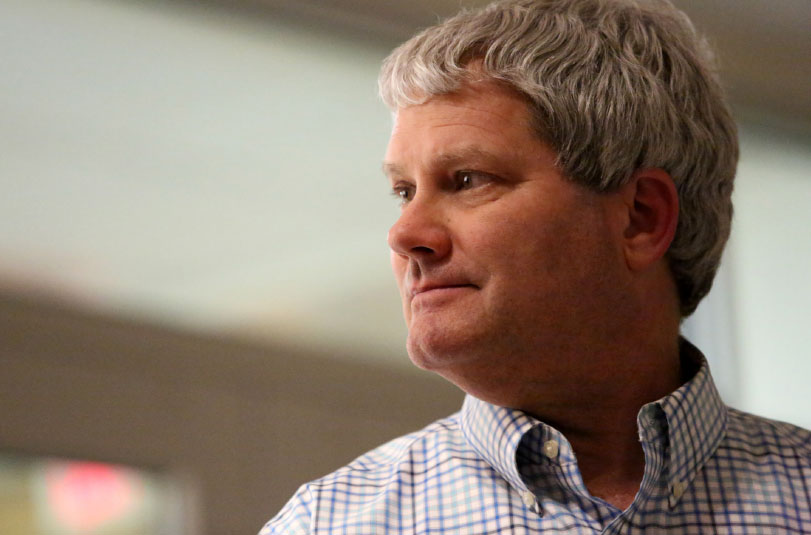 Theatre patron Charles Allen enjoyed seeing both “All is Calm” and Wynton Marsalis and his orchestra. 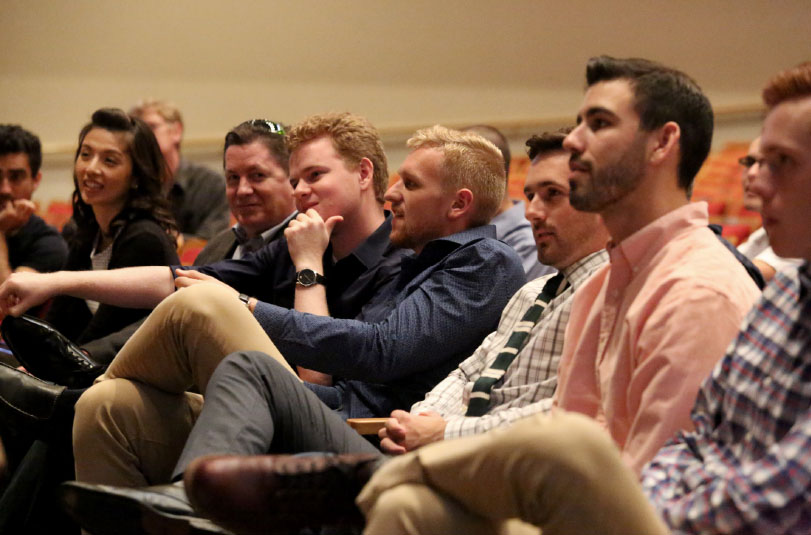 Students and educators alike participated in the Q & A session after the Jazz at Lincoln Center Orchestra rehearsal.