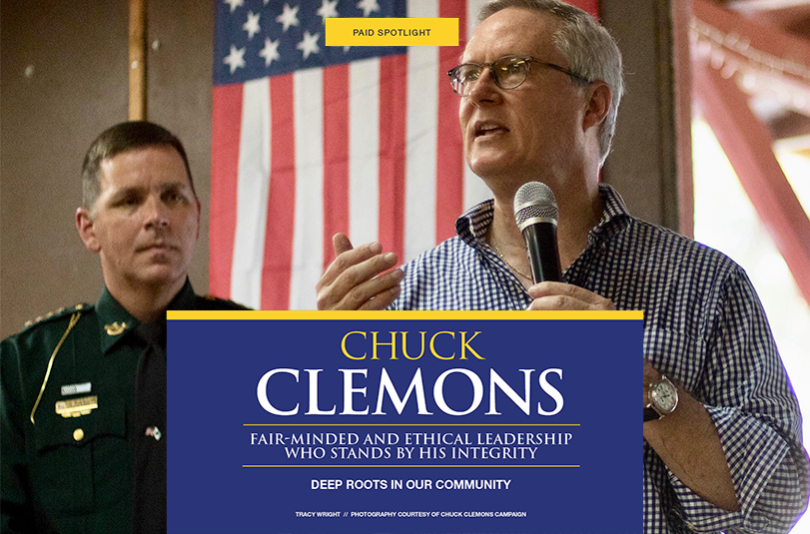 This time last year, local real estate broker and community leader Bonnie Cameron experienced the scariest time in her life. Her daughter Tonya arrived in St. Maarten to help her granddaughter Cameron settle in to her first year of medical school. Unbeknownst to them, Hurricane Irma was headed to the island.

The hurricane hit just after they arrived and knocked out power. For two days, Bonnie and her husband, Ralph, did not know if their daughter and granddaughter were dead or alive. Feeling helpless, Bonnie reached out to her friend, State Representative Chuck Clemons.

“As soon as we contacted Chuck, he was there for us. Somehow, he got in touch with their group in St. Maarten and we were able to confirm their safety. It was the scariest time of my life,” Bonnie said. “Chuck is one of the kindest, nicest and most compassionate people I have ever known. He would have done this for any one of his constituents. He serves the people the way he would his family.”

Clemons, Vice President for Advancement at Santa Fe College and State Representative for District 21, is motivated by a simple mission: to help people and to work as hard as he can to do so.

A strong work ethic was instilled in him at an early age by his father, who in 1922, as a 6th grader, dropped out of school to work and help provide for his family. Clemons was raised on a chicken farm in High Springs, and his father taught him to work hard and always treat people with respect.

“My father told me there were two things people couldn’t take from you: your name and your education,” Clemons said. “You are born with a good name. If you want to keep it, always maintain a high level of integrity and ethics. That is how I have lived my life personally and professionally.”

As his first term concludes, Clemons is campaigning to continue to do what he loves most: work to improve the lives of those in his community.

At Santa Fe College, he has worked with thousands of students to provide scholarships for them to further their education. For Jacobi Bedenfield, a 2017 Santa Fe College graduate, Clemons took the time to speak with him about scholarships and opportunities in the community, and he encouraged him to seek leadership positions. Bedenfield served as Santa Fe student body president from 2016-2017 and as state president of the Florida College System Student Government Association. 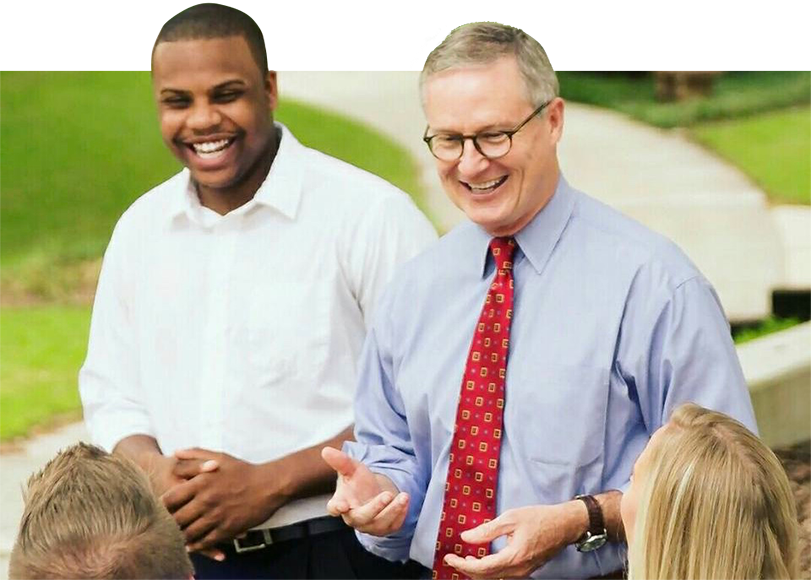 “Chuck Clemons genuinely cares about the well-being of every person he meets,” Bedenfield said. “I saw this firsthand, as he became more than just a college administrator — he became my mentor and friend.” Clemons currently serves on the Higher Education Committee of the state legislature working with the state college system to advocate for underprivileged and underrepresented students.

“The issue of education is extremely important to me, as my father always told me that an education can never be taken from you. I especially identify with the first-generation student because I was one. I worked two jobs to obtain my education as a first-generation college student,” Clemons said. “I want to help students succeed. This is one of the most rewarding missions.”

Terrell Jenkins is another student who was positively impacted by Chuck Clemons as a student at Santa Fe College. Jenkins came to Santa Fe after serving as a U.S. Marine. He was directed to Clemons for assistance with scholarships and their relationship grew from there.

“Chuck has been a mentor, father and a brother to me. He has provided so many opportunities to me as a student and beyond. I encourage people to look beyond political parties, as I think we let that divide us. As a representative, Chuck’s record speaks for itself. He has been consistent and talks the talk and walks the walk. I feel confident in telling people to vote for Chuck,” said Jenkins, who now works as an admissions officer at Santa Fe College.

“I now feel led to help other students follow their educational dreams,” Jenkins said. “It is a way to pay it forward from the way I benefitted from my assistance from Chuck and others.”

This is not Clemons’ first foray into politics. Clemons served as an Alachua County Commissioner from 1996 to 2000. As a county commissioner, he fought to keep taxes low by rolling back the millage rate. He was also instrumental in recruiting the Dollar General Distribution center in Alachua. Since then, Walmart and Cisco distribution centers have come to the area. Clemons said he is passionate about job creation for the local community.

Alachua Mayor Gib Coerper appreciates and is grateful for Clemons’ leadership and dedication to the entire district, which encompasses Alachua, Dixie and Gilchrist Counties.

“Thank you, Representative Chuck Clemons, for having an ‘open door policy,’ where students and cities in your district benefit from you listening and finding solutions to help us in the short term and the long term, that help make our quality of life ‘The Best’ it can be,” Coerper said.

Clemons isn’t just a representative for his district; he makes sure he is part of his district, said Gilchrist County Sheriff Bobby Schultz. When Schultz approached Clemons about the possibility of finding state funds to help finance a new jail to replace one of Florida’s oldest operating jails, Clemons told him that state funding for the project was a longshot at best. But after visiting the jail himself and talking to GCSO staff, commissioners and citizens, Clemons assured Schultz that no matter the odds, he would go to Tallahassee and fight to get the funds.

“Chuck never fails to ask what he can do for me, our county and for law enforcement on a regular basis. He takes everyone’s views and concerns into careful consideration before moving forward on anything. What I admire most about Chuck is his can-do attitude coupled with his sincerity and complete honesty,” Schultz said.

While his attempts to replace the Gilchrist County jail were not completely successful, he assured Schultz and the county that he would be back next year because he knew that having a jail was a critical need and not a want.

“There are those politicians who proclaim to ‘Back the Blue.’ Chuck Clemons demonstrates his support, not with just words, but with deeds,” Schultz said. “When our county lost two deputies to a coward’s act of violence, April 19, 2018, Chuck came to the scene, not to be seen or to take advantage of the huge media circus that ensued but rather to come hug my neck, pray with and for me and to let me know that my office, the families and our county were not alone. He stood with me every step of the way. Again, Chuck Clemons isn’t just a representative of District 21 – he is part of District 21.”

In the aftermath of September 11, 2001, Clemons teamed up with Bonnie and Ralph Cameron to support the Red Cross, veterans and first responders. They created and organized Bikers on Parade for the USA. The first ride had over 1,100 participants and subsequent rides have raised over $500,000 for the cause. Later, the parade was recognized by the Guinness World Records as the longest motorcycle parade in the world. It was not surprising to Ralph Cameron that Clemons stepped up to the plate to help local citizens, because that is who he is about and how he lives his life.

“Chuck is one of the most open-minded and fair-minded people I know,” Ralph said. “He understands and appreciates the importance of a healthy real estate market for our community. I am never afraid to express to him how I feel about the issues and my point of view. We don’t always agree, but he never shuts me down and will explain his point of view. He is transparent with his views and his intentions.”

Clemons appreciates the importance of working with all kinds of people in his role.

“I work for what’s best for the district. I am not afraid to stand up to special interests or even my own party on issues,” Clemons said. “I am passionate about education and I am sensitive to the high costs of education. I sponsored a bill to freeze tuition and fees for state colleges and universities. Although it didn’t pass, I am undeterred in keeping the cost of education low and providing all types of education for those looking to improve their lives.”

Besides education and job creation, other key issues that Clemons sees as vital for the district’s future are the environment and agriculture. Clemons was named Legislator of the Year from the National Waste and Recycling Association for a bill he sponsored that unanimously passed on the House floor that will allow the recycling of dirty plastics.

“As someone who grew up in rural Alachua County, I am very aware of the importance of protecting and conserving our natural environment and water resources,” Clemons said. “I was proud to sponsor that forward-thinking bill. We are only the fourth state that will allow us to recycle dirty plastics and reduce waste stream by as much as 20 percent.”

Clemons serves on the Agriculture and Natural Resources Appropriations Subcommittee and emphasizes the importance of the agricultural industry, which serves as the state’s second largest.

“Two percent of our population grows food for the other 98 percent. When our largest industry, tourism, takes a hit like it did during the recession years, agriculture steps up big to keep our economy afloat,” Clemons said. “Florida is the vegetable basket of the Eastern seaboard. Specifically, District 21 is one of the largest peanut-producing districts in the state. The importance of agriculture on this state cannot be understated.”

Something Clemons never forgets is how he represents all of District 21 and its interests, not just Greater Gainesville. He believes it is something that sets him apart from other candidates.

When you talk to anyone who knows or has worked with Chuck Clemons, several key words will always pop up: fair, kind, helpful, compassionate.

“I volunteered with Rep. Clemons during his first run for the state house and now I am doing the same again because I know he is the proven, experienced leader that this area will benefit from, now and in the future,” Bedenfield said.

Clemons has learned that his years of political experience at the local level as well as his position at Santa Fe College has really helped him to serve District 21 at the state level.

“I have a solid understanding of the issues because of the lifelong relationships in this community,” Clemons said. “I have sat down with the anguished student who was working 40 hours a week to fund her education, and I’ve listened to the small business owners who would be negatively impacted by legislation. These types of experiences have given me a more seasoned view on the issues affecting the district, and if blessed with another term I will continue to serve our community.”