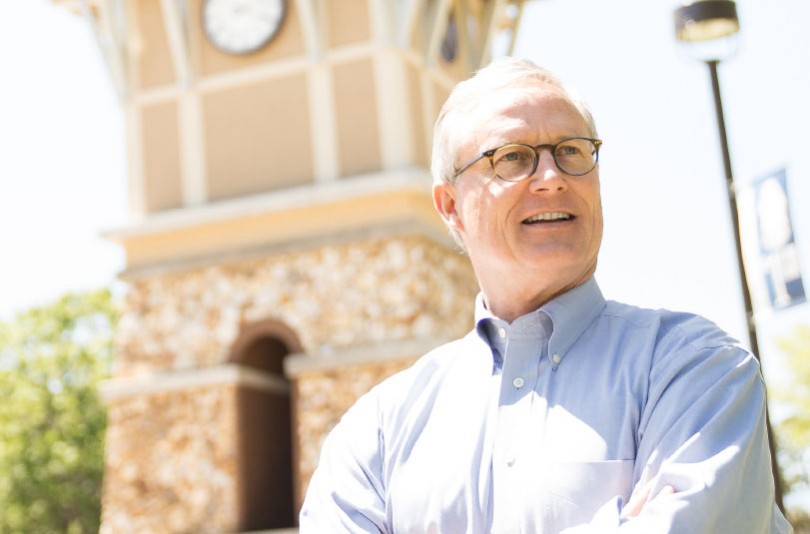 The importance of education has been a prominent theme throughout Chuck Clemons’ life. Raised on a chicken farm in High Springs, Florida, Clemons went on to pursue higher education as a first-generation college student. Despite only finishing formal education through the sixth grade, Clemons’ father instilled in all of his children the importance of education. School should be valued, Clemons’ father taught, because an education can never be taken away — a lesson Clemons has carried with him throughout the years. He never took the education he received for granted, working two jobs to pay for his tuition at Florida Gateway College and the University of Florida.

“We live in a wonderful area with many things that make a great quality of life,” said Clemons. “Not everyone has been as fortunate. Many people helped me, and I would like to pay it forward. I would like to be remembered as the guy who helped people change their lives through education.”

Clemons’ career in public service began in 1996 when he decided to run for an Alachua County commissioner seat. During his four years in office, he hired a new county manag-er, kept taxes low with a rollback of millage rates, brought a new park to Jonesville, worked to solve the solid waste dilemma and assisted in resolving issues within the jail system.

Following his term as commissioner, in 2011 Clemons was appointed by former President George W. Bush to serve as the state director of USDA Rural Development. In this role, he fought to maintain the best interests of rural community residents in Florida and the Virgin Islands by working to enhance economic development and overall quality of life. This included his successful efforts in bringing the first medical clinic to Bell, Florida. Clemons attributes his passion for preserving the interests of small towns and rural com-munities to his upbringing.

“I think rural is not just a place but a state of mind,” Clemons explained. “People who grew up or are from rural places have a keen sense of community and self-reliance. I am proud of those values that were instilled in me from an early age.”

Clemons currently lives in Jonesville with his wife of 14 years, Jane, and is proud to call Alachua County home. Chuck’s local family history extends even farther than Florida’s history; the Clemons first moved here around 1832, more than 10 years before Florida became a state. “His roots run deep in this area,” said Jane, who works as a real estate broker with Gainesville-based Front Street Commercial Real Estate Group.

According to Jane, Chuck has always had a deep need to help others. “He has always served the public in everything he’s done,” she said, adding that the two first met while volunteering on the parent-teacher association for W. W. Irby Elementary School. “He has consistently shown that he puts the needs of others before his own. It takes a special kind of person to do this and he is one of those people.”

Clemons’ drive for helping others has extended far beyond the local community. Follow-ing the September 11 attacks in 2001, Clemons organized with friends Ralph and Bonnie Cameron to form Bikers on Parade, a charity ride that supports local veterans and first responders.

“Chuck made the comment to all of us as we were getting ready to ride — ‘We need to do something from the biking community to show our support for the victims,’” recalled Bonnie Cameron. “If not for Chuck’s suggestion and then following through to make it successful, Bikers on Parade would never have begun.”

The first ride had over 1,000 participants, and subsequent rides have raised over $500,000 for veterans and first responders. This year’s ride will embark from Santa Fe College on Sunday, Nov. 6, 2016, with a kick-off party at Gainesville Harley-Davidson on Thursday, Oct. 27.

As Santa Fe College’s current vice president for advancement, Clemons channels his life-long enthusiasm for education to ensure the school maintains its quality programs and the students maintain their motivation to learn. In this position, which he has held for the past nine years, Clemons oversees the facilitation of quality education to over 15,000 enrolled students, including those with similar backgrounds to his own. He finds joy in this role, he says, especially being able to meet with scholarship recipients and coaching them in areas such as public speaking.

“I find great joy helping the first-generation and non-traditional students equip themselves for a better future,” Clemons said. “Leading a great team, we have raised more than $15 million for scholarships and program enhancements for deserving Santa Fe Col-lege students. This is tremendous momentum for a college of our size.”

It took nearly 13 years for the Santa Fe College Foundation to raise its first $1 million to distribute to deserving students. In 2016 alone, Santa Fe College is fortunate to award that same amount in scholarships to a total of 500 students. Clemons was instrumental in guiding the campaign efforts — since he places great value in earning a college education, he enjoys helping students achieve this goal for themselves.

Of his many accomplishments, Chuck Clemons said he is most proud of his service to the community through various nonprofit organizations, specifically the University Kiwanis Club. The organization was instrumental in raising funds to build the Kiwanis Child Play-ground, the first of its kind in the community with facilities that accommodate differently abled children. Clemons has been active in the organization for more than 13 years, and he has also served as a past president.

“Giving to others of your time, talent or treasure provides a joy that is unmatched,” Clemons said. “I tell others, ‘Try it and you will see for yourself.’”