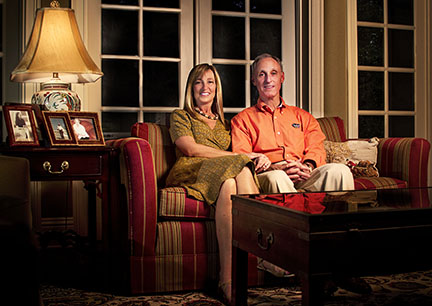 One might expect the Farbs have a lot to say.

While Ron and Dianne Farb do have much to tell, their anomalous relationship with one-word answers is unrelated to their day jobs. Rather, the salesman and attorney have lived fascinating lives that cannot be explained in just a few short words.

But luckily for those who love a good story, the couple built a home together in

Haile Plantation that helps to share their lives’ saga with any who enter.

A table in the sitting room is not just a convenient place to rest coffee, but also a display case for ivory chess pieces—a collection Ron acquired by dangerously crossing international territory while on leave in the Vietnam War.

Two pretty pictures mounted on the walls are not generic, home-store reproductions, but unique inventions of Dianne’s own imagination. The eye-catching displays of couples in love are the covers of Dianne’s novels.

Ron is the globe-trotting adventurer and Dianne the Jane-Austen sentimentalist. The two were fixed up in 1993 by a close friend – a friend who went on to ask for their “I-dos,” and 10 years later, renew their marriage vows.

Ron said he remembers their first date vividly. “It was dinner, and she was doing this thing that was annoying to me,” he said laughing.

Apparently, Dianne had been flipping her hair too much. She quickly rebutted, explaining that at the time she was growing her hair out, and the product in it had been bothering her.

Almost 20 years later, they can joke about their first impressions of one another in good humor.

In 2001, after Dianne was offered a job an attorney at the University of Florida, she and Ron moved to Gainesville. A few years later, on Ron’s birthday in fact, the couple made Haile Plantation their new home.

It was 2004, and Ron and Dianne took a brief pause before the moving ordeal to celebrate Ron’s birthday and consecrate the bare bones of their empty space. Since then, the Farbs have filled the house with memories, including its building plans, which Dianne had framed and mounted in the hallway as an anniversary present for Ron.

Just down the hall is where Dianne settles at her secretary’s desk in the master bedroom and conjures up passionate romances that unfold in exotic locations.

Like many struggling artists are said to do, Dianne has her serious day job where she spends most of her time, but when she can, she writes what she describes as steamy, but classy, romance novels under the pseudonym Rebecca Heflin. The pen name was inspired by Dianne’s great-great grandmother Sarah Anne Rebecca Heflin Apple Smith. Dianne thought the abbreviated “Rebecca Heflin” had a nice, romantic ring to it.

The genre of romance Dianne writes is a good read for women who are sophisticated, educated and possess a sense of adventure. Dianne said her heroines trend a little older because her characters need life experience like she, herself, needed life experience to write her books.

The feeling Dianne gets from writing is exhilarating. “It is the most freeing thing I’ve ever done,” Dianne said, throwing up her hands. “Just to let my imagination go.”

The feeling is similar to the one Ron gets as he hikes up a mountain.

In his spare time, Ron climbs peaks such as Everest, Kilimanjaro and Rainier. And with each step up an ascent he makes, he supports a cause.

Ron and Dianne are co-founders of Climb for Cancer, a non-profit organization they started in 2002 to help fund cancer research and programs that support cancer patients and their families. Many organizations raise donations through walks or runs, but Ron’s passion is climbing.

“It is such a thrill,” Ron said. “It is an amazing feeling when you push past those limits that you think are there.”

So far, Ron has pushed himself up five of the seven summits, the highest mountain on each of the seven continents. Doing so, he has helped the foundation raise more than $1,000,000.

It all started 23 years ago when Ron began working at Camp Sunshine, a camp in Georgia for children with cancer. Since then, he has returned to the camp 18 times. “After spending a week with those children, who climb Mount Everest every day of their lives, I wanted to find a way to raise money, and I found it through climbing.”

Ron satisfied his need for adventure with his desire to help a worthy cause and formed the Climb for Cancer Foundation with Dianne, and he has not looked back since – literally. He is usually looking up inclines.

However, one will not see Dianne on one of these precipices. She said she is deathly afraid of heights and will never go on one of these vertically daring trips. Though the Farbs’ views do not coincide on mountain climbing, they clearly agree on one thing.

The Farbs knew exactly what they wanted in their new home together, they just had to find the people who could make it happen. Home builder Tommy Waters, Architect Jennifer Langford and Interior Designer Sally Thompson, all of Gainesville, would eventually be those people.

Ron travelled to Jackson, Miss., back in 1974 to visit a friend, and it was there that he met Hays Town, a low-country architect Ron admired for his symmetrical, gracious, country designs. He said he knew if he were ever fortunate enough to build a house of his own, it would be a low-country home.

Fortunately, Ron was able to realize his dream, and luckily, he married Dianne, who also has an appreciation for low-county style. She actually calls it her dream home as well—appropriate, seeing it is where she realized her girlhood fantasies of becoming a romance novelist.

The master bedroom is where she tucks herself away to write, but there are many other creative niches in the house. From the bench sitting in the rose garden to the large bath with a fireplace at its feet, one can easily find reprieve from day-to-day life.

These meditative spaces are necessary features in a home for two people who are constantly busy and so involved in the community. The Farbs have grown attached to Gainesville; their foundation is here, their jobs are here, their friends are here, and their home is here.

Dianne said she loves the area—and like any good relationship, the feelings are mutual. Ron said the Gainesville community has a philanthropic spirit that “has embraced our foundation and helped us grow.”

“My life right now is fuller than it has ever been because of the opportunity we have to help people every day with cancer. I also have been able to inspire other people, especially children, to give back. I think that will be my legacy.”