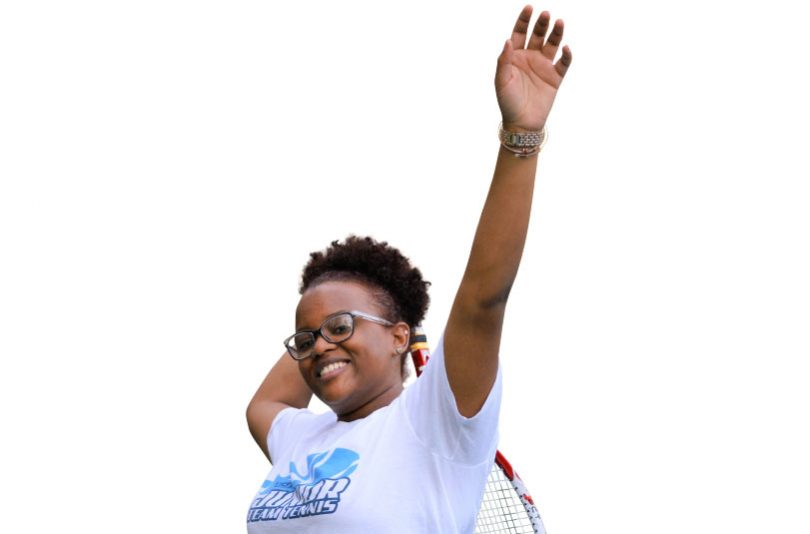 My first denial (into) college, I cried,” Kajen Monroe said. “(Addison Staples) sat me in the office and said, ‘You know what, wipe your tears. It’s going to be OK. All this pressure is coming at you — and you know what pressure creates? Diamonds.’”

For 18-year-old Monroe, Addison Staples was what she needed to open up. In 2013, when the Aces in Motion (AIM) program started, Monroe was the first recruit. She was in seventh-grade at the time.

As a seventh-grader, Monroe started tennis to humor her mom and “just to do something.” She didn’t really enjoy tennis until after her first practice when she was approached by Staples, the executive director of the Gainesville Area Tennis Community Association (GACTA).

She describes herself as having a particularly short temper in those days. To her, and to many of the kids in AIM, Staples is their Superman.

“Addison’s favorite thing to tell me was, ‘Whenever you’re mad, call me up, we can take it out on the court,’” Monroe said. “He never hesitated.”

Today, Monroe works for the GACTA’s Aces in Motion program as a coach. The program was developed by Staples and GACTA to help disadvantaged youths, both in school and in character development.

To the kids, Staples is “Coach A.” Every staff member is a coach.

Every kid is an athlete. The identities are an important part of sports-based youth development.

“Some of the kids are just trying to get through the day,” Staples said. “If they can take the identity of an athlete, even though they may not be travelling the world playing tennis, they have something to hold on to or look up to.” 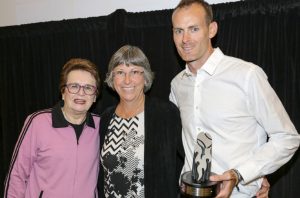 The staff members work to be role models disguised as coaches — it’s the fundamental rule for working with AIM. Staples refers to it as their “special sauce.”

While pursuing his master’s degree in parks, recreation and tourism at the University of Florida, Staples volunteered at local schools like Rawlings Elementary and Howard Bishop Middle School. It was there that he saw the need for a program like AIM.

When the program started, AIM was composed of only Staples, his support staff and around a dozen kids. Today, they manage at least 12 sites, including the main one at T.B. McPherson Park, and 450 kid athletes.

Staples believes the program’s dedication to Ashe’s vision of academic assistance and character development is what earned it a United States Tennis Association’s (USTA) NJTL Chapter of the Year award in 2016. GACTA was honored at the USTA Semi-Annual Meeting, held September 3-6 in New York City. Former professional tennis player Billie Jean King was there to congratulate Staples and Anne Koterba, the board director of GACTA, as they received the award. They were also honored at a city commissioner meeting in Gainesville on October 20, 2016.

The work to alleviate the economic disparities in Gainesville is what made GACTA stand out, according to Staples. AIM focuses on under-served youth, including those with disabilities and those living in low-income neighborhoods. The program has a no cut policy, and is low-cost and sustainable. Any profit generated is used for outreach efforts in Gainesville.

“I use sport as a vehicle for social and individual change,” Staples said.

Staples believes that through the program, athletes begin to see improvement. Staples and the coaches hear praises from parents and see higher test scores. The athletes put the As they’ve earned onto the AIM fridge, and by the end of the semester, the surface is covered.

“A lot of our kids are struggling in school, and a number of them are being held back, so we are up against a lot of odds,” Staples said. “It takes a village. We’re not pretending our ‘special sauce’ can fix someone and totally turn around lives. But, if you talk to Kajen or (the kids), they’ve had opportunities that have changed their lives.”

Staples recognized Koterba as the other co-founder of AIM. Monroe credited her college acceptance to the essay Koterba helped edit.

Monroe was the first student to work with AIM and the first AIM athlete accepted into college. In fall 2017, she will attend Florida A&M University. In college, she plans to pursue tennis but her education is her first priority.