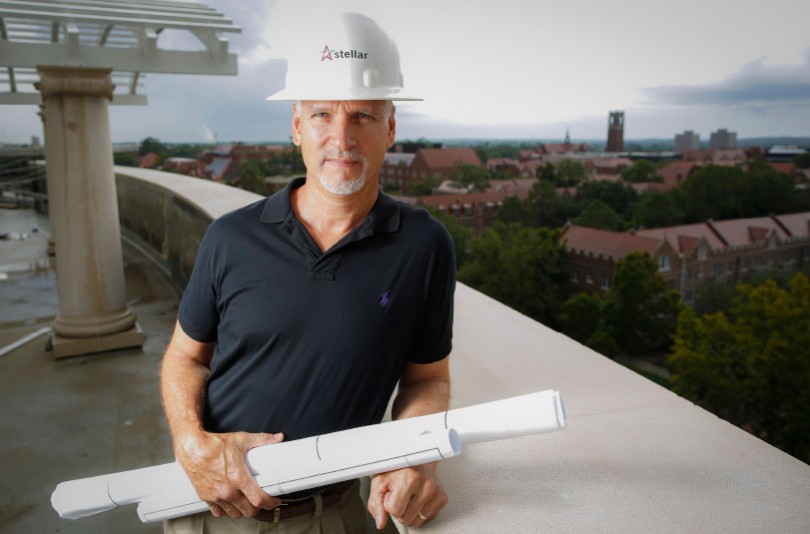 Perry founded his own roofing business at 18 and turned it into a nationally recognized company. 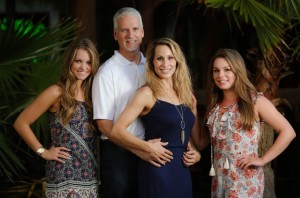 Perry, his wife Amy, and his daughters Alexis and Amanda are all big Gator fans.

Perry considers his business to be one of his greatest prides. “Having a business that survives for 40 years and being able to bring a team together and keep a team together,” makes him feel accomplished, he said. Perry attributes part of the success to his “incredible staff” and says that he constantly gets emails, voicemails or text messages about the quality of his company’s work. “It’s encouraging to know how well they do,” he said. Perry Roofing has worked on North Florida Regional Medical Center, a building for NASA, and countless other commercial and residential buildings in the area.

Raised in Gainesville, Perry is a Gator Country native and even has a “Gator Car” to prove it — a ‘58 Buick painted orange and blue. He, his wife and two daughters go to every home football game, and his oldest daughter currently attends the University of Florida. In his free time, Perry enjoys camping and hiking with his family and traveling to historic sites around Florida.

“Of course,” Perry said, “just having a family and kids is always challenging but fun.” Perry was motivated to run for the Florida House of Representatives and later the Florida Senate by his 16- and 19-year-old daughters.  He doesn’t want anything to interfere with the opportunities the next generation is going to have, and when he runs for office he does it in the interest of creating a better world for his children.

While running his business and caring for his family, Perry has served as a member of the Florida House of Representatives, founded charity House of Hope, and served as a board member for the Boys and Girls Club. Perry Roofing supports several charities as well, such as Habitat for Humanity and PACE Center for Girls. “What I look for, and our company looks for, is any charity that we think is going to have a lasting impact,” Perry explained. He also considers House of Hope one of his greatest achievements, “because of the changes that take place in a person’s life.” 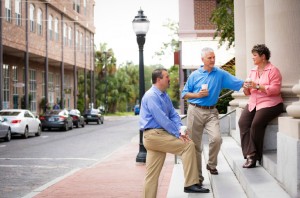 Perry has always been an involved member of the community.

House of Hope is a transitional housing program for newly released prisoners. Many charities visit prisoners to help inmates while they are serving their sentence, but Perry maintains that few charities help inmates once they are out of prison, which is when the help is most needed.

“People who have been in prison for multiple years get a bus ticket and $50 and get dropped off in the same intersection where they were arrested, with a warning don’t do it again or you will go back to jail,” Perry said.

He explained that a majority of arrests are for drug crimes. Those are people who have likely burned a lot of bridges and may or may not have a family structure to support them once they get out. House of Hope gives newly released prisoners a structured place to live, and operates on voluntary enrollment. “They are coming from an environment where they are subject to every rule in the book and going to an environment that’s not quite as restrictive, but still restrictive. That’s a sacrificial thing where they say ‘I have to do this for me’,” Perry said.

The organization also helps newly released prisoners find jobs and develop relationships with community members off the streets. Perry asserts that the fear of going back to jail is what motivates most people who have been recently released, but in the case of drug addiction, that fear can be overwhelmed by the temptation to relapse. House of Hope rehabilitates those who enroll for the program not by saying “don’t mess up,” Perry explained, but by helping people re-establish their lives.

As a Gainesville native, Perry says he is passionate about the community and “the sports, the arts, and the diversity of people who live here.” An appreciator of the arts, Perry is interested in seeing a new school of music at UF.  “I think if we look at the university becoming a top five public institution, we have got to look at a broader net, not just STEM,” Perry explained.

Education in general is also very important to Perry, and his goal is to be as open as he can to continue learning throughout his life. “We are all biased people,” he explained. “When we believe we know something, we stop learning. My goal is to always be open to and listen to anybody about any issue with an open mind, and to continue to grow and continue to learn.”