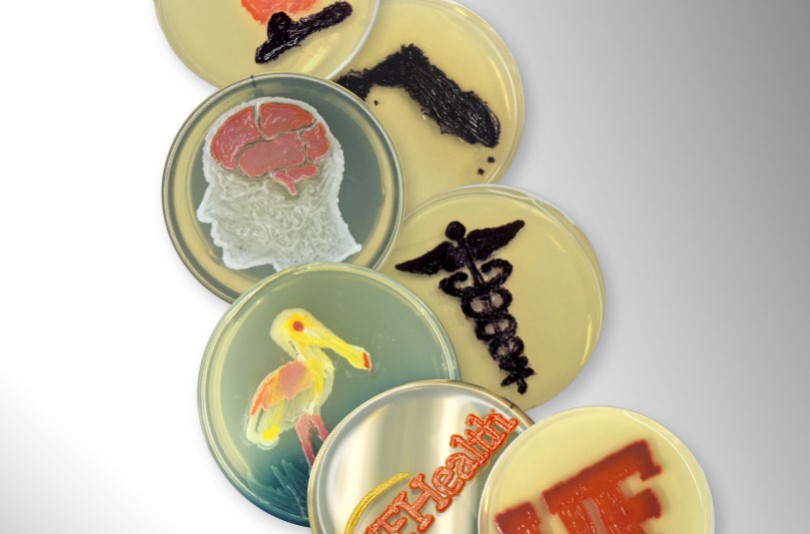 Every artist has his or her preferred mediums. Picasso used a paintbrush and canvas. Rodin used marble and a chisel. Elizabeth Tremblay uses bacteria in a plate of agar.

Agar, which is a soy based broth with the consistency of Jell-O, is food for bacteria. When bacteria is placed on a plate of it, the bacteria will grow and can produce various vibrant colors.

Art and science is an intersection that few explore, but Tremblay already had an interest in art before even entering the contest. Between pictures of friends and exciting life moments, her Instagram account also features images of bacteria that she appreciates from an artistic standpoint. She has featured cultures that have especially interesting patterns or vibrant colors.

“When we heard about the Agar Art contest it was pretty cool because we knew we would be able to collect different-colored bacteria over the course of a few weeks,” she said. The 2016 contest was her second time entering.

All of the bacteria used for Tremblay’s masterpieces came from patient cultures, so finding interesting colors was a collaboration between her lab and the micro lab. Different bacteria have different pigments, so when the micro lab found an interesting color, they would hold onto it for Tremblay and her coworkers to use in their artwork. In this way, by using cultures found in the field instead of stock cultures, their art was different, Tremblay said. “Ours was cool because we just waited for these to come in from regular patient cultures. We didn’t use stock. We didn’t buy a particular color,” she said. “They’re from actual true patients.” And although the bacteria do come from patients, when handled properly in a contained environment, there is no danger, she said.

It’s challenging to create the pictures using different bacteria that produce different colors because when the bacteria are placed on the agar, you can’t see them yet, Tremblay said. You can only see where you might have touched the agar, so you have to be careful. If you accidentally contaminate one color with the other, you won’t know until it grows, she explained.

The bacteria become visible after about 24 to 48 hours. If she missed a spot, Tremblay said she can add bacteria to it, but after 48 hours some of the pigments aren’t as vibrant. “If you want a really pretty piece of artwork you have to time it out perfectly,” she said. “It’s just like paint, except you can’t see the paint until 24 or 48 hours later. So it’s like painting without seeing.”

To paint with the bacteria, Tremblay uses a plastic needle that’s about the size of a pen tip. She dips the needle in the bacteria culture and draws her design onto the agar. A faint outline guides her next move.

For each contest, she looked for images that were detailed but not too difficult to draw. She wanted images that were bolder because she explained that even if you’re careful, you’re not guaranteed a perfectly straight or thin line.

For her first submission she entered with coworker John Delano in 2015, Tremblay decided to create a four-part entry. It included the UF monogram, an outline of Florida, the caduceus and a microscope. Tremblay and Delano are both double Gator grads, so they titled the piece “Created as partners, submitted as one. Paying homage to our alma mater, the Gator Nation.”

Her coworker Nicole Hillard didn’t enter the contest, but decided to make agar art for fun. She created a roseate spoonbill, an uncommon vibrant bird that lives primarily in Florida’s wetlands. Hillard decided on a bird to express her love of animals and childhood experiences raising birds. The spoonbill was Hillard’s first attempt at agar art, which she had never heard of it until Tremblay introduced her.

Hillard currently works as an infection preventionist and previously worked in UF Health’s Clinical Microbiology Lab for eight years, which helped her greatly in her new hobby.  “Understanding bacteria’s growth patterns and colors on agar is vital in accomplishing agar art,” she said.

While Tremblay hasn’t won yet, she has been a finalist and plans to enter future contests. “It was an interesting perspective, to see the good in [the bacteria] and make artwork with them,” she said. “It was a rare positive thing from the bacteria.”

“Bacteria; they have a mind of their own.”

The white-colored silhouette was drawn using Staphylococcus epidermidis. This bug is part of our normal skin flora, but can cause opportunistic infections in the presence of indwelling medical devices such as catheters, ventricular shunts, and other prostheses. 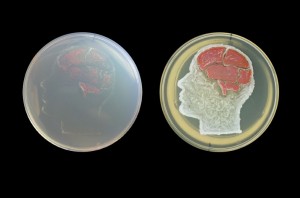 The red-colored brain matter was drawn using Serratia marcescens. Serratia is found in the respiratory and urinary tracts. Often found in bathrooms growing along grout lines. It forms an orange-pink film pigmented by prodigiosin.

I chose tryptic soy agar (TSA) because I wanted a general growth media that would not select for or against either of my bugs and the clear color of the agar would allow my design to be visible. This illustration was particularly challenging because I had to avoid contaminating my S. epidermidis margins when filling the brain lobes with Serratia. Those who work with bacteria will agree, these bugs appear to have a mind of their own.

“Created as partners, submitted as one. Paying homage to our alma mater, The Gator Nation.”

John and I are both two-time alumni of the University of Flrida, both with a BS in Microbiology and an MPH in Epidemiology.

When tasked with choosing a design for our agar art submission, we both selected images that paid homage to our alma mater, the G 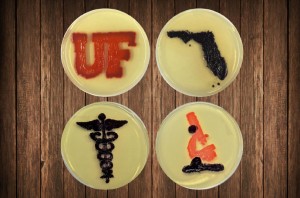 ator Nation. As a regional leader in science and medicine, what better way to portray the University of Florida than with the caduceus and a microscope? Accompanied by the UF monogram and the state of Florida, we quickly realized it would be unjust to choose only one design. And so was born, a joint submission.

We used Serratia marcescens and Chromobacterium violaceum on tryptic soy agar (TSA). We chose a strain of S. marcescens that produced an orange pigment rather than its typical dark red. We used Chromobacterium violaceum because it was a rare find, not something you see everyday, making its debut in the micro lab a few weeks before we began plating our art. The C. violaceum has a dark purple hue, but appears black or dark blue in its infancy. While we had other “blue” options, none were as captivating as the C. violaceum.

As coworkers and infection control practitioners we felt it would be a refreshing change of pace to cast a positive light upon bacteria that are usually known for the havoc they wreak. And what better excuse than the ASM Agar Art contest?  #AgarArt2015  #ASM