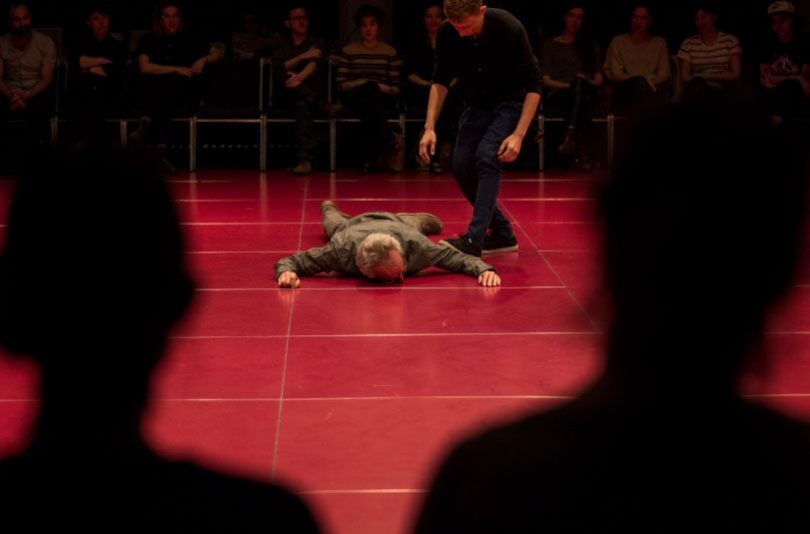 We’re sitting in chairs set up around a red stage, about 40 of us, in the Squitieri Studio Theatre, ready to experience ‘The Fever.’ I soon notice a group to my right moving their hands and arms, slowly up and down and back up. Gradually most everyone begins to do the same motion. It reminds me of the only qigong move I know, and while this experience – being in an audience-participation performance – is way out of my comfort zone, I find the movement relaxing. 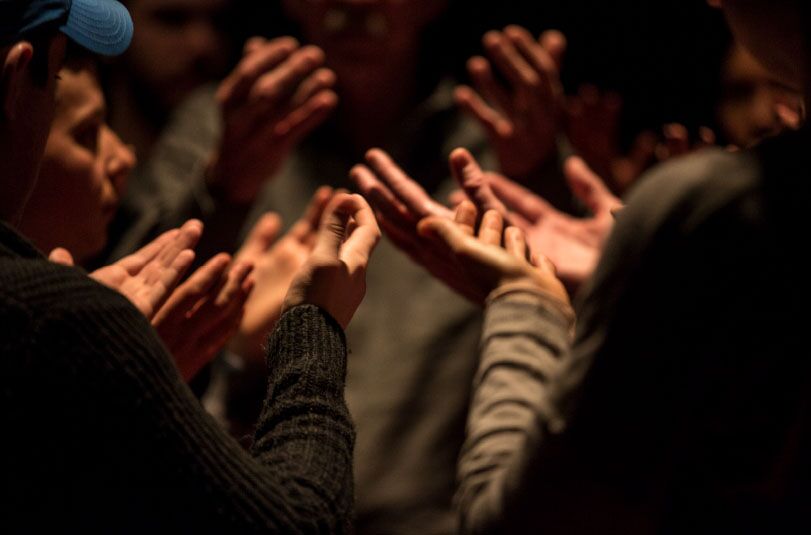 The Fever, presented by the University of Florida Performing Arts this past February, is the latest production of 600 Highwaymen, which is the moniker for theater artists Abigail Browde and Michael Silverstone. On this night, both were sitting among the unsuspecting theatregoers, along with other actors who would eventually stand up and engage the audience in the production.

The woman who had started the arm movements now stands and tells a story about Maryanne who is crying, standing at her kitchen sink. As she talks, she brings audience members onto the stage to act as Maryanne or other characters in this story.

It goes on like this, telling a story with audience members standing on stage, holding out hands, going through movements, ‘acting.’

There’s a party. She takes us by the hand onto the stage: “This person comes in late to the party,” she says. “Everybody calls her name.”

An actor pulls me onto the stage: “This one has left his cup somewhere and can’t find it.”

“Outreach are those type of engagements that happen beyond the stage,” Jose said. “I believe anyone of any age remembers that kind of event – it has gravity.”

The audience would probably concur – The Fever has that kind of gravity.

“It’s great for an artist to come in and do a master class, but I’d be equally interested if they do yoga,” Jose said. “It’s a great way to connect with students on campus, to have that creative experience with an artist, maybe with yoga as a platform rather than a master class. It’s all good to me. It depends on the artist and what their comfort zone is.”

Jose said that while younger artists may be hesitant to take on the mantle of being the master because they are still learning their craft, they still have much to offer, such as their experience breaking into their field and how they develop their art.

“Michael McDonald is going to give a whole different conversation than a singer on their first national tour,” Jose said, “but both have something very valuable to share.”

Last December, students and educators were invited to watch Wynton Marsalis and the Jazz at Lincoln Center Orchestra rehearse and conduct a sound check before the concert. Students ranging from elementary school to college had the opportunity to see firsthand the masters at work, and then participate in a Q & A after the rehearsal.

“A lot of artists are really enthusiastic about education and reaching out to kids,” said Derek Wohlust, Education Outreach Coordinator for UF Performing Arts. “My focus is elementary school, because that’s when it starts. So I’m hoping that when we do these events for the kids, they stick.”

“This work, though clearly a different genre, is like The Fever in that it speaks directly to the mission of UF Performing Arts,” Jose said. “Buck and Boogz combine elements of street dancing, jookin’, ballet, and others I don’t even know about to send a message of hope and love. It’s a message we desperately need today.”

Both Jose and Wohlust would like to see more of this type of outreach. In fact, Jose has set a goal of having all UF Performing Arts performers engaged in the community through outreach and community engagement. These programs are made possible by sponsors and donors. But for Jose it is more than just outreach, because before any experience can happen there has to be an audience.

“I think that it is really important for us to get people in the door to understand the experience of attendance, that behavior,” Jose said. “To me, a good example is of you attending The Fever. It was not only attendance, but now that you’ve been you know where to park, you know how to get in, use your ticket, all those kinds of things that are seemingly menial but are an important part of the attendance process.”

The woman on stage describes a guy at the party with the ice bag, throwing it on the garage floor to break up the ice.

That’s me again. I’m that guy. I instantly relate.

Everybody leaves the party, but one person walks outside and looks around. I suddenly remember being out in my yard after everyone had left my party, just as she describes.

It goes on like this, evoking memories, thoughts and feelings, more than any other play I’ve attended.

In July of 2016, UF Performing Arts celebrated its 25th Anniversary. What would Jose like to see happen in the next 25 years?

“We had a really solid foundation of 25 years, and I tell anyone who will listen to me that the real measure of our success will be the 50th anniversary,” Jose said. “I want the people of Gainesville and the students of this campus, and our students in our public schools, to have some kind of interaction with our artists. I want them to see the performances, to be clear, but I want some kind interaction beyond the stage.”

Jose described attendance as a behavior, and realized that the work that they are putting on stage now – and for the next 25 years – needs to develop new audiences.

An older actor takes the stage and asks if someone will join him. And then another. Voluntarily, people rise to the occasion. Then he says, “Will someone catch me?” and he falls to the floor. He asks for someone to roll him over. To move his arms. To leave him alone.

Then, “Will someone help me up?” And they do.

He does this three or four times. The last time he simply lies there in silence. I knew someone should help him get up even though he didn’t ask. But I wasn’t bold enough to get up and do it. Eventually, three people helped him.

UF students Kaitlyn Salyer and Payal Majmundar were in the audience that evening. After the performance they said this was unlike any show they’d ever experienced.

“It honestly was not what I expected,” Salyer said. “It offered the viewer more opportunity to inject their own opinions and maybe their own life-experience into it, rather than being someone else’s story. I like that.”

“This is something I normally would never do,” Majmundar said. “I thought that the most interesting part about this play was that whenever they did bring you up and you were with this stranger right next to you, you kind of had a feeling that you wanted to get to know the other person. But then, afterward, everybody kind of dispersed and that didn’t happen.”

They talked about how they related personally to the experience. Salyer was feeling homesick.

“I was thinking about my town and dinner parties,” she said. “I had a nostalgic feeling about it, remembering my family back home or outside of Gainesville.”

Majmundar had been reflecting on interpersonal relationships.

“This is my first year at college and being in college is the first time in your life that you start being viewed by other people as an adult, and I think that changes all of your relationships in your life,” she said. “As you grow up, you think more about other people and less about yourself. So, it was really perfect for the way I’ve been feeling about my life.”

“The positive side was trying to show us all our collective humanity,” Salyer added. “And that we are all collected.”

While not strictly a product of outreach by UF Performing Arts, Brian Jose might consider such experiences to be beyond the stage.

“The important part of this is that I think artists have a whole lot to share and it makes our lives richer when we can have that connection,” he said.