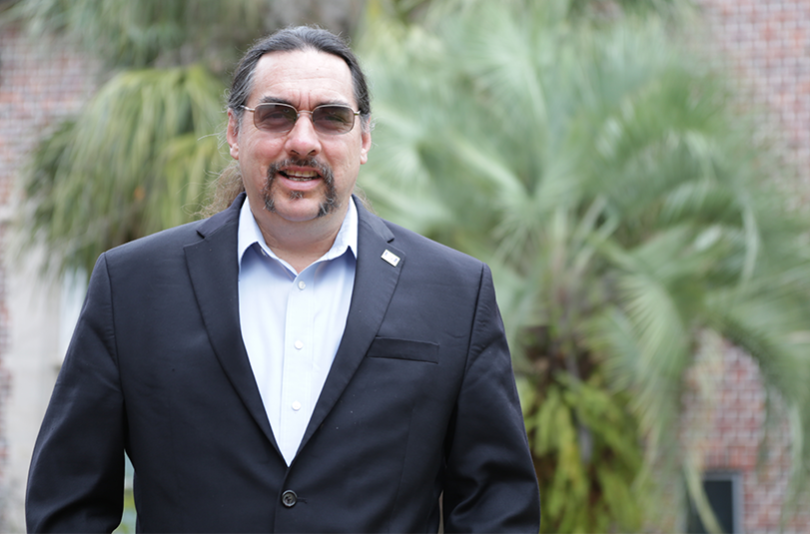 Since Paul Ortiz’s publication of his most recent book in January, the University of Florida associate professor of history has held over 70 events at universities, book stores and community organizations across the country.

Ortiz’s pioneering book “An African American and Latinx History of the United States” details North American history from a Latinx and African-American perspective, one that has been severely under-represented.

The word Latinx is the  gender-neutral term for Latino or Latina that represents inclusion of a discriminated group.

Within the past year, Ortiz has delivered readings and teachers’ workshops to a wide ambit of academic hubs including Northwestern, Duke, University of California, Berkeley and Powell’s Books. NYU and Harvard have booked Ortiz to speak later this year.

On Aug. 28, Ortiz gave a talk on his book in Smathers Library at UF. After a brief introduction from the Dean of University Libraries, Judith C. Russel, Ortiz elucidated passages and answered audience members’ questions about the book and the history surrounding it.

Mary Freeman, a 71-year-old Gainesville resident and retired UF Health Shands Hospital employee who visited the event said, “My husband and I are very interested in this particular aspect because you don’t really hear about it that much.”

The couple had heard Ortiz speak before and were eager to learn more of his perspective on history. 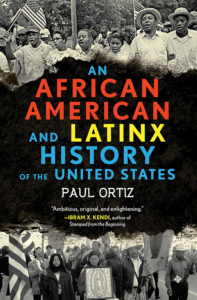 Ortiz’s ardency for telling the untold history of Latinx and African-American heritage not only comes from his own Latinx history, but also from his students’ hunger for knowledge.

Freeman said she was about 10 years old when she visited her first segregated restroom.

“It said ‘white’ and ‘colored.’ I didn’t know what that was, so I just thought there were pink stalls and white stalls and you just picked one. My father had to pull me aside and reteach me. When we were growing up, this wasn’t talked about very much,” she said. “I really look forward to reading this book.”

In 2002, Ortiz won the Lillian Smith Book award for his first book “Remembering Jim Crow.” His second book, “Emancipation Betrayed: The Hidden History of Black Organizing and White Violence in Florida from Reconstruction to the Bloody Election of 1920,” received the Harry T. and Harriette V. Moore Book Prize from the Florida Historical Society and the Florida Institute of Technology.

Ortiz’s third book has followed in these footsteps. The book has received academic praise, critical acclaim and recognition from universities across the country.

Ortiz’s ardency for telling the untold history of Latinx and African-American heritage not only comes from his own Latinx history, but also from his students’ hunger for knowledge.

“You didn’t even learn why the U.S. invaded Mexico,” he said in regard to his old U.S. history textbooks.

Ortiz saw the evidence of neglect for education of Latinx and African American history continue when he taught as a professor at the University of California, Santa Cruz and UF. Students of color complained that they weren’t being taught a visible history of their ancestors. Ortiz knew these students deserved to understand their heritage.

“This book comes out of the classroom,” he said.

While embarking upon his tour to speak at universities, Ortiz also made plans to speak at surrounding community colleges, community organizations and high schools to give his trips the most impact as possible.

“Universities and university classes are obviously important, but the book was
never designed to be just for university people,” he said.

Ortiz visited Washington, D.C. several
times during his tour and each time he spotted a former student at one of his talks.

“I have a lot of great students,” he said. “It’s allowed me to reconnect with people who I hadn’t seen for years and years, so that’s been really cool.”

He counts meeting with Breanne Palmer, a former student, as one such memorable experience. Palmer graduated from UF in 2012 and moved on to attend law school. She made time to meet Ortiz at one of his Washington, D.C. readings and the two were able to share fond memories and catch up.

“It’s been a great tour,” Ortiz said. “It was really fun to be at the
libraries because I could see just so many friends who I hadn’t seen in years and years.”

When Ortiz visited Powell’s Books in Portland, his son Josh, former students and other family members who live nearby flocked down to support his event in the famous book store. Ortiz said this reading was very special.

“Growing up I always loved books,” he said, “so being surrounded by them was amazing.”

Ortiz reemphasizes his respect for the U.S., but its dire need to register its history accurately.

“Yeah, we love the country, but we have to own up to things that weren’t good,” he said. “People are looking for different, newer interpretations – different ways we can recognize history. But also, let’s not just keep writing from the same nationalism of the U.S.”