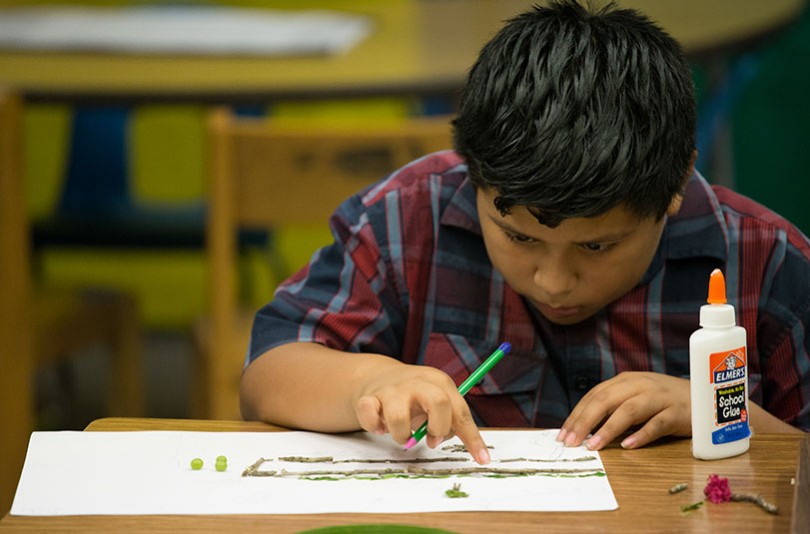 “By the third grade, kids are on their way to their life path,” noted Poe. “We need to fill the hours between 3 p.m. and 6 p.m. with activities that increase their social and leadership skills and supplement their education.”

Poe has a long-term view. He’s asked city staff to do a “gap analysis” on what after-school programs exist and what the barriers are to making such programs universally available. Poe wants to work with Alachua County Schools and involve the city’s Parks, Recreation and Cultural Affairs Department and the police department – as well as community groups – in expanding service. “I want to explore grants administered through the Florida Department of Juvenile Justice and other agencies,” Poe said.

Alachua County Schools benefit from a federal grant for the 21st Century Community Learning Centers initiative, which was created under the No Child Left Behind Act. The program benefitted 740 students at nine schools during the past school year. It also provides summer activities. Activities are wide-ranging, including ones involving robotics, science, fencing, nutrition, art and health. 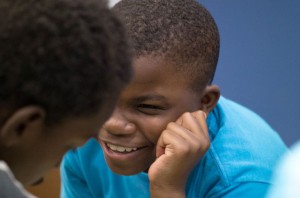 One morning at Alachua Elementary this summer, students spent part of their time with gyrobots, toys that are small robots, in learning how gyroscopes work in keeping various devices level. Everett Caudle, who was leading the students, started as a tutor with the program while he was still in high school. He continued working for 21st Century while he was getting his bachelor’s in education at St. Leo University. This fall, he’ll teach at Alachua Elementary. “I’ve enjoyed making an impact through 21st Century,” he said. “It’s great to enrich the kids’ educational experience.”

Melissa Montgomery, the school district’s 21st Century project manager, said the program is having a big impact. “We help students learn by doing – solving problems by applying scientific theories and then drawing conclusions,” she said.

During the school year, staff and volunteers also help students with homework. “I love seeing our program evolve and make a difference for families,” Montgomery said.

The program has made a major impact in the year since it came to Alachua Elementary, said Assistant Principal Bonnie Bing. “We don’t look at 21st Century as something separate,” she said. “We see it as part of one big unit.”

The program focuses on more hands-on activities than are possible during the school year, when class sizes are larger, Bing said. “This is fun, which is important for learning,” she said.

Having after-school activities has been important to parents, Hall said. “Parents appreciate having this available. It’s saving a lot of kids from getting into trouble.” 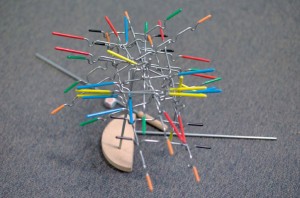 The Gainesville Parks and Recreation has a strong after-school program for elementary students called the Foundations Academy.

Most students attend at no charge, due to qualifying because they receive free or reduced school lunches or receive scholarships, said Recreation Manager Shannon Keleher.

The curriculum focuses on “character counts” as well as tutoring and sports, she said. “We realized that many of our students weren’t passing from grade to grade, and we’re helping them with the assistance of mentors and tutors.” 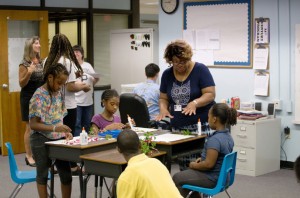 The Extended Day program is a nonprofit organization that operates through the school district. It provides after-school programs at every elementary school.

Parents are charged on a sliding scale, with fees ranging from $20 to $48 for the first child with reduced fees for additional children, said Coordinator Angel Londrie.

Most of the program’s activity leaders are University of Florida students. “It’s win-win,” Londrie said. “The UF students get experience, and we benefit from their interest in learning how to work with kids.”

Activities at each school vary, depending upon the background of the activity leaders. “If we have a leader who is a musician, we can teach keyboard,” Londrie said.

The capacity at each school is limited by the fire-code capacity of each cafeteria, which is where activities are centered, resulting in most schools having a waiting list of 100 to 200.

“We don’t have a way to track the kids on the waiting list, so we’re not sure if they’re in another program that costs more and waiting to get into Extended Day or if they’re home alone,” Londrie said.

“It would be great if we could work with the city to provide more space,” she said. 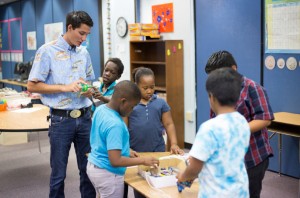 The Boys & Girls Clubs of Alachua County, Girls Place and Sun Country Sports are among other providers of after-school services in Greater Gainesville, Sherrard said.

O2B Kids has its own buses that pick up students from school.

The company is growing, meeting demand for all its services – which include preschools and various classes. It opened a location in Oviedo this past March, and it plans to open an Altamonte Springs location this winter.