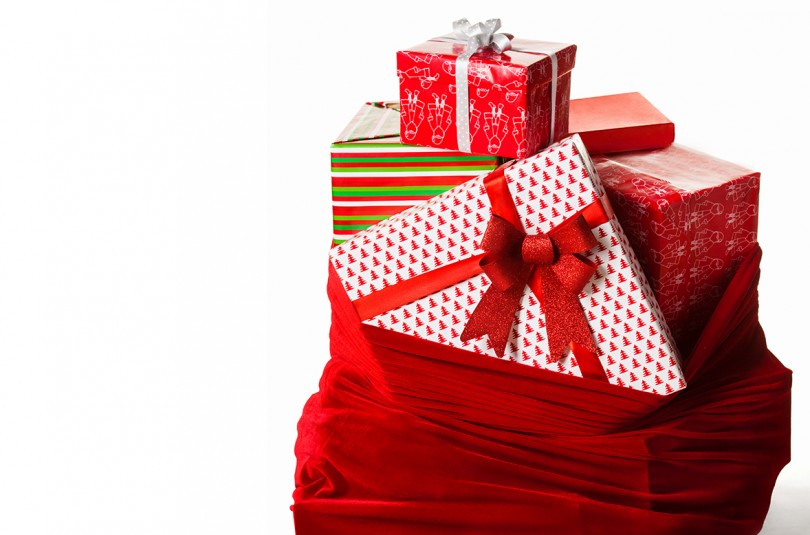 UF MBA Program Rallies to Provide for Families in Need

Santa had four special helpers last Christmas, and they weren’t elves. They were University of Florida employees.

The individuals were charged with a unique task: to deliver a washer and dryer to a local family in need. As they were pulling up to the family’s driveway, Gregory Harvey, his wife and his three kids eagerly waited outside not knowing that their lives were about to change.

Gregory was born clinically blind. Due to his impairment, his wife, Erin, was only member of the family that could regularly drive to the laundromat.  However, as the secretary and youth president of First Born Church of the Living God and a full-time mom with two kids in school and an eight-year-old son with cerebral palsy, she had little time to make the trip. The gift eliminated the need for those trips and saved the family, already on a tight budget, a significant amount of money.

“We felt very blessed,” Gregory said. “We really needed [the washer and dryer].”
Yet, the Harveys weren’t the only family that benefited from the kindness of UF’s employees.

Every year, a group of about 20 employees from UF’s Master in Business Administration office sponsors families through Habitat for Humanity. Alex Sevilla, assistant dean and director of the UF MBA program, started the annual holiday service project four years ago as a way to bring the office together for a good cause.

“We try as best we can to make sure that it’s not just about business every single day and every second,” Sevilla said. “This is one of the things we do to make that happen.”

Knowing that his employees are competitive by nature, Sevilla decided to make the service project a game. Or as he likes to call it, a “charity competition.” The annual competition takes place during office hours
in December.

As the game’s coordinator, Sevilla is in charge of dividing the staff into teams and assigning each team a family. On the day of the competition, each team receives a family’s wish list and a few hundred dollars. Then, the teams set out on a scavenger hunt around town to buy as many listed items as possible with the money that was given to them.

Adding to the challenge, every year there are new rules that the teams must follow. In previous years, the teams had to: shop at a minimum of three places, spend all the money given to them, stay together the whole day and take pictures to document their day.

The teams’ final task is to create a basket with all of the items they purchased and a PowerPoint that shows what their day was like. The day after the scavenger hunt, each team presents their basket and PowerPoint to the rest of the staff, and a winner is chosen.

There is no tangible prize for the winning team, only the fulfillment gained from helping fellow community members (and office bragging rights). As such, they’re not the only ones that walk out feeling triumphant.

“We all feel like winners,” said Christine Wilson Plumley, who has participated all four years. “No matter what, we are making an impact in someone’s life, and that is really cool.”

Many times, sponsored families have to choose between paying rent or buying Christmas presents for their kids, said Kristine Thompson, program director for Alachua Habitat for Humanity. Thanks to the UF MBA program, the families can afford to do both.

“I have families that tell me ‘I don’t know how I would’ve been able to afford Christmas without this,’” Thompson said. “The impact is huge.”

Last year’s winning team was the group who got the washer and dryer for the Harveys. Kara Cupoli, a member of the winning team, was one of four individuals who got to deliver the gifts to the family.

“It was pretty amazing because even though the dad is severely visually impaired, he still got in the truck and started helping us get the washer and dryer out of the trunk,” Cupoli said. “They were incredibly excited and grateful.”

Yet, none of this would be possible without funding and the cooperation of a few daring individuals. Throughout the year, the MBA program hosts a series of fundraisers to collect money for the cause. Like the event itself,
the fundraisers are designed to inspire friendly competition.

Two years ago, the office hosted a penny war, a fundraising tactic where each participant receives a bucket to collect cash donations. The winner is the person with most money in his or her bucket. But, in this case, instead of getting a big prize, the winner was forced to kiss Theo, a staff member’s pet pig. The lucky winner, or loser depending on your interpretation of the situation, ended up being Cupoli.

“The pig bit me,” Cupoli said. “But it was really funny… we laughed so hard.”

Last year, no pigs were involved, but dodge balls and cowbells were. In an attempt to include students, Sevilla proposed that if the entire department raised $2,000, UF MBA students could challenge the program’s directors to an athletic competition of their choosing.

“We reached that number,” Sevilla said. “They chose dodge ball and got to basically pelt us with dodge balls.”

Additionally, if the department raised $2,500, the directors had to form a band and play at the students’ end of the year banquet.

“We kind of threw it out there as a joke,” Sevilla said, “and then ended up having to fulfill it.”

After a couple of rehearsals, Sevilla along with the rest of the directors, including Cupoli, took the stage at the Jolie and performed classics such as “Knockin’ on Heaven’s Door” by Bob Dylan and “Closing Time” by Semisonic. Cupoli played the maracas and the cowbell, and Sevilla played the guitar and sang.

Over the years, the UF MBA program has sponsored about 20 to 25 families, according
to Sevilla.

“We are so blessed to be in a position to be able to help,” Sevilla said. “It’s very rewarding, and I would encourage others to do the same thing.”

Be one of Santa’s special helpers this Christmas by sponsoring a family through Habitat for Humanity. Nine families need your help this year. And while the UF MBA program would love to sponsor them all, they simply can’t. If you are interested in becoming a sponsor, contact Kristine Thompson at [email protected] or 352-378-4663.