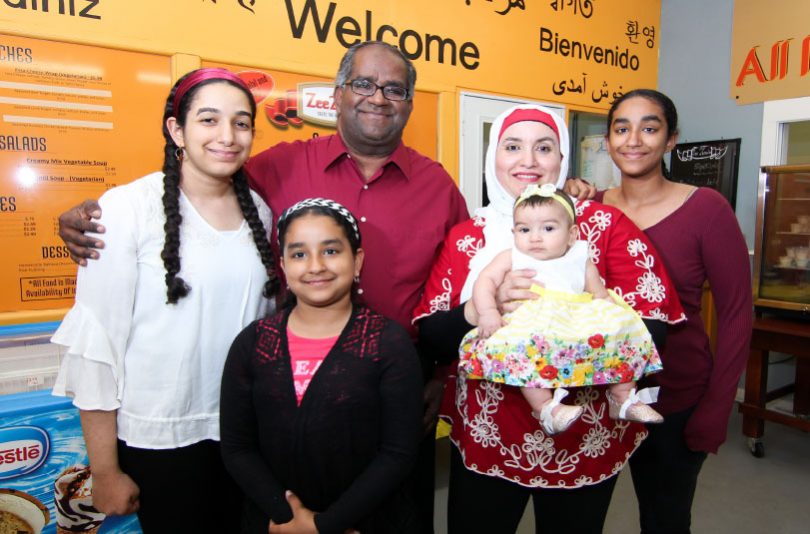 Dr. Fawzy Ebrahim always dreamed of being a farmer. After years of education, moving across the world, two doctorate degrees, and two brain surgeries, he finally got his wish – right here in Greater Gainesville.

Ebrahim was born in Egypt. He grew up attending school and admiring his father’s work as a grocery owner. But when Ebrahim was 14, his father died. After losing his father, Ebrahim maintained his studies and made efforts to follow his heart and opened a small ice cream and soda pop stand.

Ebrahim’s studies paid off. He was accepted to Assiut University in Egypt in 1993 and, once there, exceeded all expectations studying physics and chemistry. He went on to earn a master’s degree in educational psychology at South Valley University. Although he had hoped to open a food market after graduating, he was offered a position as a teaching assistant at the university, a highly esteemed position in Egypt, so he chose to continue his research and studies.

From there, his academia flourished. He and his wife, Zaineb, made the decision to move from their home in Egypt to Athens, Georgia in 2000. It was in Athens where the couple started a family and at the University of Georgia where Ebrahim earned a master’s in statistics and two doctorate degrees: one in special education, the other in statistics.

After completing his doctorates, Ebrahim, his wife and daughters moved to South Florida, where he taught special education online and statistics in the classroom at Florida Atlantic University and Nova Southeastern University. But Ebrahim never forgot his dream of becoming a farmer. He planted grape vines and fruit trees, including mango, fig and guava.

In 2006, Ebrahim had only been a professor for a year when he received grim news – he had a brain tumor and needed surgery. It was this brain tumor that forever changed his life and brought him to Gainesville for the very first time.

Ebrahim’s operation was performed at the UF Health Shands Hospital, so he visited Gainesville often in the months leading up to the surgery. His operation a success, he returned to his home in South Florida, visiting Gainesville every six months for checkups.

Then, in 2009, a second brain tumor appeared, so Ebrahim decided it was time to move his family to Gainesville as permanent residents. The second surgery was also a success, and Ebrahim saw a positive opportunity that could come from his illness: he would finally become the farmer he had always wanted to be.

He bought a farm in Newberry and built a house. At first, his farm consisted of little more than fruit trees and one man’s dream. Soon he began growing organic vegetables and raising chickens, cows, goats and sheep. He said he raises and processes these animals in the most holistic of methods, keeping unnatural hormones away from his livestock. He even uses his chickens’ manure to fertilize his plants to ensure they are grown with the most natural of products.

Ebrahim said that once customers started hearing about his products they began buying them from the farm. However, he knew his location was too far for some UF students.

“Many students don’t have transportation, and they aren’t going to drive 20 miles to buy a chicken,” Ebrahim said. “So, I started thinking about a small store closer to campus.”

Once Ebrahim got the idea, he ran with it. He found a location off 13th street that was being used for storage. With the help of family and friends, he renovated the unit.

On Feb. 12, 2016, Ebrahim opened Zeezenia International Market, located at 2325 SW 13th St. The business was first a market purely for meat, but it quickly became the international market it is today, with Middle Eastern, Belgian and Turkish products lining every aisle.

Ebrahim said the market holds a majority of international items people in Gainesville are looking for. He continues to expand and is always searching for new food and products to bring to his customers.

On July 22, 2016, Zeezenia International Market opened its hot kitchen, which makes each item fresh every day. The kitchen offers popular international dishes, including baked ground beef and lamb with rice and salad, Zaineb’s lentil soup (with a recipe so secret she won’t even tell him), as well as the fan favorite falafel.

The store also sells freshly made hummus and baklava, and Ebrahim said the menu is always growing one item at a time.

In December, the market added a dining area. Ebrahim said his consumer base is typically people from Turkish, Belgian and Middle Eastern cultures, but others have started coming in for the hot food and to shop around, as well.

Today, Ebrahim has lemon, peach, mulberry and pomegranate trees. He cut back on growing vegetables, but hopes to again begin growing arugula, Belgian cucumber, carrots, garlic, onion and parsley. He now owns the original farm that started it all and also rents two other farms: one in Ocala, where he raises goats and sheep, and one in Lake City, where he raises cows.

“Come and give us a try, don’t judge before you come,” Ebrahim said. “Whether you read a good comment or bad comment on Yelp or Google, come and try it out for yourself and you will see what makes Zeezenia International Market different and special.”

Ebrahim runs Zeezenia International Market with the help of his family, and the joy on his face was evident – joy for the love for his wife and four daughters and for his life as a small-business owner.

Ebrahim is living out his dream as a farmer.