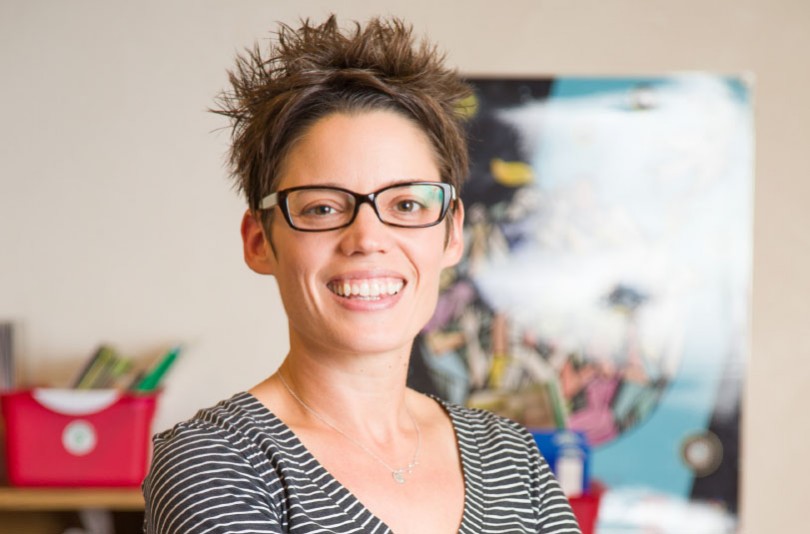 When Lisa Kopp took the job as the ACHIEVE academic program coordinator at Girls Place Inc., many people put their faith in her.

First was the seeing staff who hired her and her new team. Next, the girls Kopp was brought on to help. But first, Kopp had to put faith in herself.

In a lot of ways, Kopp was outside of her comfort zone when she started at Girls Place. She was working with a younger age group than she was used to in an entirely new city and state. Ultimately, the ACHIEVE girls’ determination and enthusiasm for their own learning helped motivate Kopp to keep moving forward.

“Seeing the girls’ success — especially some of them [who] keep pushing through and persevering — I find that really inspiring,” Kopp said.

“[They feel] excited to come read with me even though they’re frustrated.”

The primary goal of the ACHIEVE program is to strengthen academic success by engaging the girls in year-round enhanced learning opportunities. The program’s secondary goal is to provide life-changing unconditional support and positive relationships with the girls that promote self-confidence and a willingness to learn. The staff set out to accomplish these goals while providing a safe environment that’s conducive to learning.

Buses arrive to shuttle the girls to Girls Place immediately after school. From 3:30 to 4:30 p.m., they are encouraged to learn and be themselves under the supervision of instructors like Kopp.

To the parents of seven-year-old Peyton McComas, the special attention Kopp gave their daughter meant the world to them. 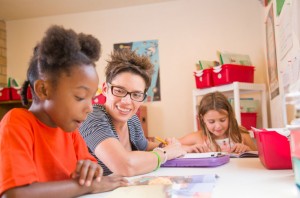 Lisa Kopp sits between two students to help them with their reading.

“[The staff] are here because they want to be here — they’re not here for the paycheck,” mother Richelle McComas said. “They genuinely care about the girls.”

“I like this place because it’s so helpful and they care about other people,” echoed Peyton, a first grader at Glen Springs Elementary School.

This is Peyton’s second year as a first grader, but McComas says it’s the best thing that could have happened to her daughter. After studying in the ACHIEVE program starting in 2015 through the fall of 2016, Peyton can now cite vocabulary words and read them, McComas said. She proudly recounted how Peyton points out words on road signs when the two are driving.

On top of academic learning, McComas especially likes the program’s lessons of respect, discipline and leading by example. And as far as McComas is concerned, Kopp is the key to the program.

“School is like ‘boohoo, boring,’” Peyton concluded. “And [ACHIEVE] is amazing!”

For Kopp, the opportunity to work at Girls Place was everything she could have imagined and more. Her passion has always been working with and teaching kids, but after teaching middle and high school English in St. Louis and Los Angeles for 10 years, she felt the classroom setting was no longer where she wanted to be.“What I’m doing right now — I’m working with kids [and] I’m impacting them…they’re seeing results; I’m seeing results; we have great relationships,” Kopp said. “I’m doing the things that initially drove me to the classroom.”

And even though she had worries about teaching kids in a different part of the country, she’s found that the same problems that plague children in Los Angeles plague them in Gainesville.

Kopp also recently started studying family, youth and community sciences at the University of Florida. For her, it’s a way to relate to the struggles of the girls in the ACHIEVE program.

“I was talking to a girl the other day about math,” Kopp said. “I was in the classroom helping her when she started crying. I’m like, ‘Math makes me cry, too!’”

When she was young, Kopp said she remembers saying that she hated reading. That experience — and her experience overcoming that sentiment — is why she understands the girls’ struggles, she said.

“I felt like I learned so much more about myself when I developed a love and appreciation for reading,” Kopp said. “When that’s shut off, it’s like shutting off a lifeline. I can’t imagine now what it would be like to go through life being uncurious — being somebody who doesn’t read.”

To help keep her students on the path to reading success, Kopp introduced a guided reading program, which the ACHIEVE program has since successfully adopted. The inspiration came from a third grader who hated going to school. Kopp did some research and reached out to many of her colleagues, ultimately coming up with guided reading initially to help the one student.

For the future, Kopp hopes to support more girls in learning how to read, particularly the first and second graders. She also said she hopes to create a dialogue between teachers and parents that will ultimately help kids get exactly what they need.