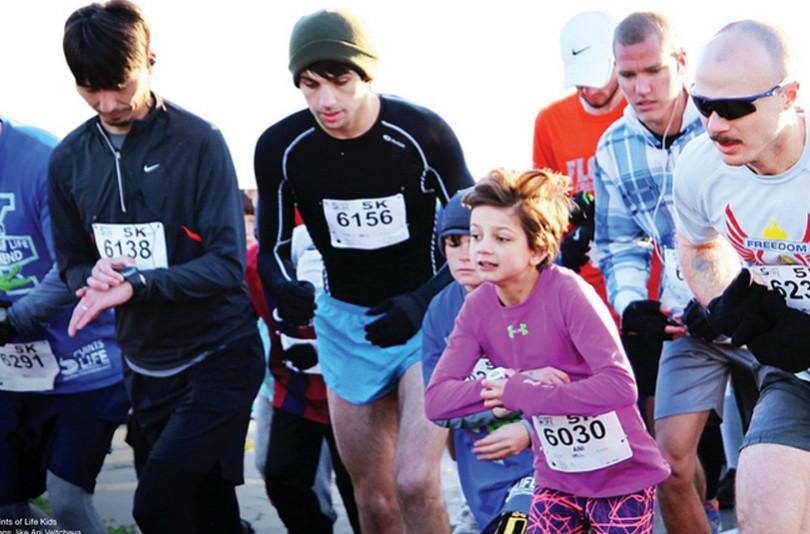 Back in 2007, when hundreds of kids crowded onto the starting line for the first Five Points of Life Kids Marathon, it looked like an event with potential, but even the most enthusiastic supporters couldn’t fathom how much.

“We didn’t think it would be as big as it is, or to spin off in nine different kids marathons,” said Five Points of Life Foundation Director Brite Whitaker.

In 2015, more than 4,000 kids from Huntsville, Alabama, to Brooksville, Florida, accepted the challenge of running or walking a marathon, a little bit at a time, logging their distance as they went. They got to celebrate their achievement by gathering with their friends to run or walk the final 1.2 miles and picked up a medal and T-shirt along the way.

That was the format that was first used in 2007, Whitaker explained, as a fun way to get kids active that could also tie in to the Five Points of Life in the Classroom lessons that teach students about the five ways to share life with others through the donation of blood, apheresis, marrow, cord blood and organ and tissue. Whitaker said those lessons not only help prepare the students for the day when they can donate, what Five Points calls “building the donation generation,” they also share what they’ve learned with their parents. And it turned out they also shared the “getting active” lessons with their folks too. On the big day there are always hundreds of parents running or walking with their children.

“We have so many families participating,” Whitaker said.

The 10th anniversary edition in Gainesville will be Feb. 20, with registered participants gathering at 9 a.m. on Bledsoe Drive, near the Southwest Rec Center off Hull Road on the University of Florida campus.

Studio 32 Orthodontics is the title sponsor for the event. Dr. Nicole Mullally said she has backed the race for the past four years for a couple of reasons, one of them that’s very dear to heart.

“We really support the Five Points of Life mission. My father actually received a kidney transplant, so it’s organ donation that has kept him with us today,” Mullally said.

As running events go, Mullally says the Five Points of Life Kids Marathon is both fun to watch and fills a unique niche.

“I love that it brings fitness to a young group and gets them involved with a healthy lifestyle,” Mullally said.
“The race is just so full of excitement and enthusiasm, and when they get their medals, they’re so proud.”

Margarita Schwiebert is the physical education teacher at Talbot Elementary and a big supporter of the Five Points of Life Kids Marathon. Eight times her students have helped the school earn the cash prize for most participation, and that prize money has helped support a special program at the school.

Schwiebert says the Five Points of Life Kids Marathon ties into her Morning Mile voluntary fitness program. Schwiebert started the Morning Mile program in 1983 at Duval Elementary and brought it to Talbot. Every morning hundreds of her students arrive early at school and run or walk laps around the playground, earning plastic foot tokens for prizes for every five miles they cover. The T-shirt and the medal from the Kids Marathon provide additional incentive.

She says some students qualify for the required mileage in just a few weeks, others take a little longer, but all feel a sense of accomplishment.

“It’s a big part of setting goals and reachable goals,” Schwiebert said. “It’s also social. They meet children at Morning Mile that they would not normally have contact with during the normal school day.”

And Schwiebert says the lessons extend beyond running and fitness. Counting laps and calculating distances incorporate fractions and decimals, and distance can also be converted to miles on the map that also provide lessons in geography. Their 335 miles can become an imaginary journey to Atlanta. She, too, has witnessed the excitement of the Saturday run, when kids from many different schools gather at the starting line. And, while actually a celebration, not a race, it would be a challenge to convince many of the participants of that fact.

“You can water things down to make them non-competitive, but they’ll make it competitive. It’s the nature of the beast,” she said with a laugh.

Cam Parker, PE instructor at Millhopper Montessori School is another big supporter of the event. He says for the younger students, the medal and T-shirt are major motivators, while for his older students, it provides an added option for PE, and a social aspect.

“It’s become a good, fun thing. They know their friends are going to be there,” Parker said.

It’s also fostered school pride. Four times Millhopper Montessori has earned the prize for highest percentage of participation, earning money to get new and better PE equipment. The school’s average total enrollment ranges between 120 and 140 students, and one year it had more total participants than any of the other larger public schools.

“That’s something we were really proud of,” Parker said.