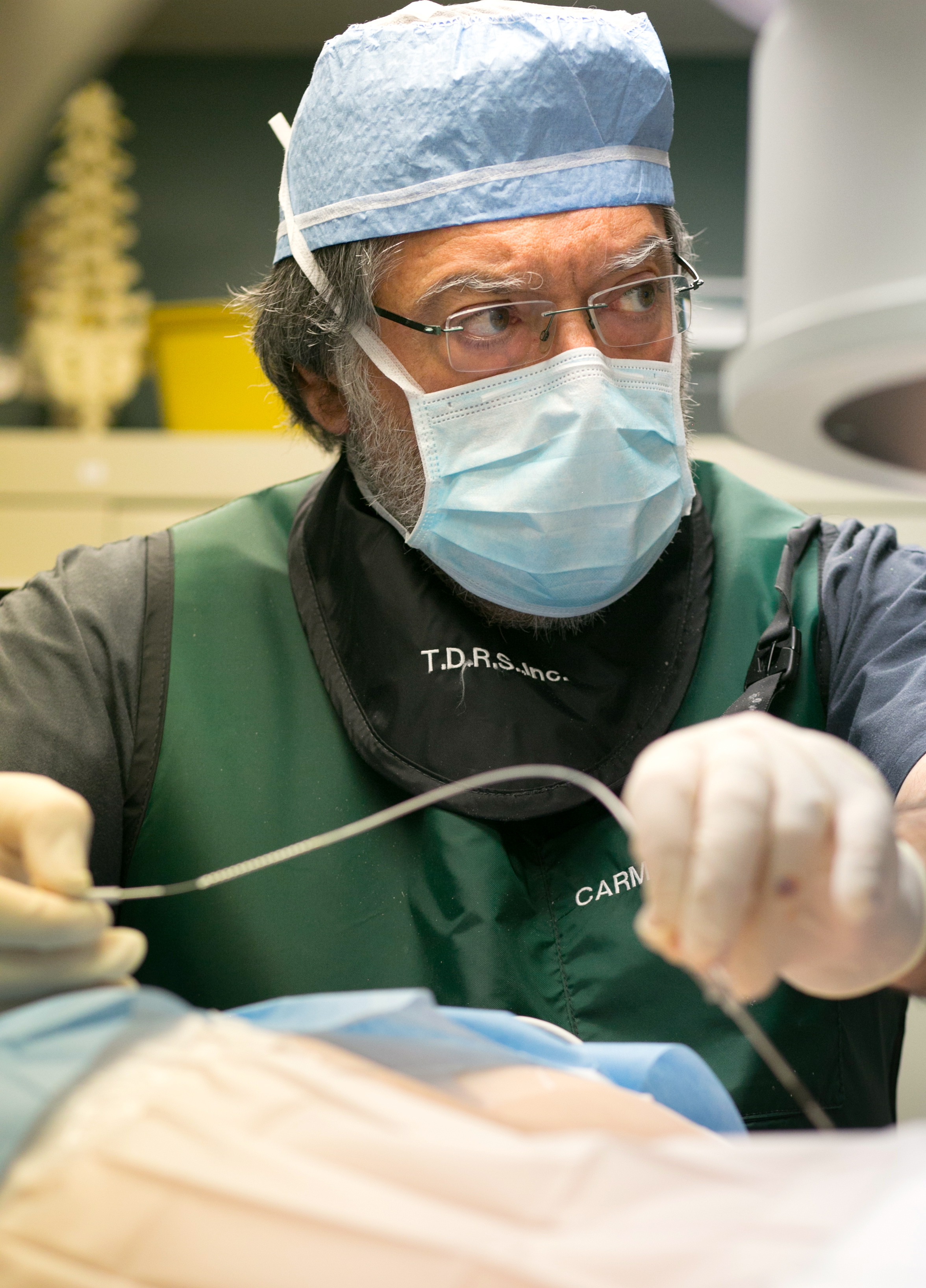 Dan MacDonald understands all too well the effects of chronic pain.

“It robs you of your future hopes and dreams because you can’t see any way out,” he said. “You’re a prisoner.”

Dan suffered for 15 years before a visit to Gainesville changed his life.

MacDonald is a former elite-level hockey goaltender from Calgary, Alberta, Canada. In addition to sports-related injuries, he also had suffered a workplace accident. Although he and his wife, Carolyn, had actively been seeking non-narcotic alternatives to controlling his debilitating pain, he was still made to feel like a “drug-seeker.”

“I was told I was embellishing,” Dan explained.

In spring of 2014, the MacDonalds traveled 2,900 miles from Alberta to Gainesville so Dan could undergo the implantation of a Spinal Cord Stimulator (SCS), a device used to exert pulsed electrical signals to the spinal cord to control chronic pain

Dan and Carolyn tried to obtain the SCS treatment in Canada, but they were met with multiple roadblocks, and pain specialists told them the success of the procedure was “fleeting.” With the support of Dan’s primary care physician, Dr. Joan Knight, the couple kept looking for specialists. That research lead them to interventional pain management physician Dr. John J. Sassano of Level 1 Pain Management and neurosurgeon Dr. John Stevenson of The Orthopaedic Institute in Gainesville.

Sassano and Stevenson have worked together on countless Spinal Cord Stimulation cases and the pair currently has one of the highest “trial-to-permanent” ratings. Together, they utilize Boston Scientific’s specialized SCS devices.

When Dan told Dr. Knight about the team, she told Carolyn to “get to Florida!”

The primary challenge was that Dan had no American health insurance.

“When I heard about Dan, I had to help,” said Dr. Sassano. “It was the right thing to do. His relationships were shattered, his wife forced to be the only breadwinner and he was suicidal.”

Sassano called Stevenson and they forged a plan to get MacDonald to Gainesville.

Boston Scientific has an internal grant program for patients who can’t afford treatment.

Dr. Sassano initiated MacDonald’s application, but he was not sure what to expect. The email arrived April 29th: “We are happy to convey that Boston Scientific has reviewed and approved your indigent patient request…to include 2-16 contact Infinion leads and Spectra IPG, paddle lead.” Boston Scientific’s donation topped $26,000.

From there, everyone was on board. Not only were Sassano, Stevenson and Boston Scientific donating services, but Paul Lingon, CEO of Total Diagnostic Radiology Services, stepped up to donate the mobile Fluoroscopy unit and technician for the trial implantation.

“A gentleman in severe pain from another country where he couldn’t get treatment in a timely fashion? I was happy to donate,” Stevenson said.

An SCS is a small battery-operated computer with electrical leads (wires) implanted onto the spinal cord. It sends electrical impulses to the brain that interfere with how the body feels pain. The process involves a trial period when leads are precisely implanted by Dr. Sassano and the battery unit programmed by a Boston Scientific technician. If the patient experiences at least 50 percent pain relief and chooses to continue, Dr. Stevenson takes over and does the permanent implant.

“There’s no question that for the right patient, SCS provides significant relief”, said Stevenson. “The success Dr. Sassano and I share has a great deal to do with good patient selection.”

Dan arrived in Florida in late May for treatment. On June 2nd, he was given the trial SCS by Sassano. On the 9th, he received the permanent implant with Stevenson.

Sassano was shocked at Dan’s MRI — another donation, courtesy of Invision Imaging.

“His back was in bad shape; I could’ve referred him to a reconstruction specialist,” he said.

Why? It could be about how the treatment is viewed by insurance companies, a surgeon’s reimbursement or even malpractice issues — after all, SCS involves threading electrodes within a half-millimeter of the spinal cord. It could be about misinformation. But, to put it into perspective, MacDonald is from a city of roughly 1.5 million with a provincial population of 4 million. Carolyn said that by the time they got to Gainesville, they had yet to receive a return phone call from one of only two clinics doing a small handful of cases each year in all of Western Canada. Sassano alone does that many in any given month.

“My patient, Dan MacDonald, just came to see me with complete pain relief,” she reported. “Dan and I want to try to change the thought process here…where this procedure is thought to be a last resort and not that effective.”

Prior to visiting Florida, Dan had a pain score of 10 out of 10. Immediately after receiving the trial implant, he reported a score of 0.

Dan is doing wonderfully — beyond expectations. In fact, after years of inactivity, Dan and Carolyn went camping in the center of the Canadian Rockies. Healing has begun. And North Central Florida physicians John J. Sassano and John Stevenson, along with their deserving medical facilities, are receiving international media recognition because of it.

“The debilitating, unrelenting pain I lived with for 15 years was instantly resolved with the Spinal Cord Stimulator trial. I am again enjoying life. My wife and I can’t thank Dr. Sassano and his medical team enough for the wonderful treatment we received before, during and after the procedure.”

Yes, the healing has begun.