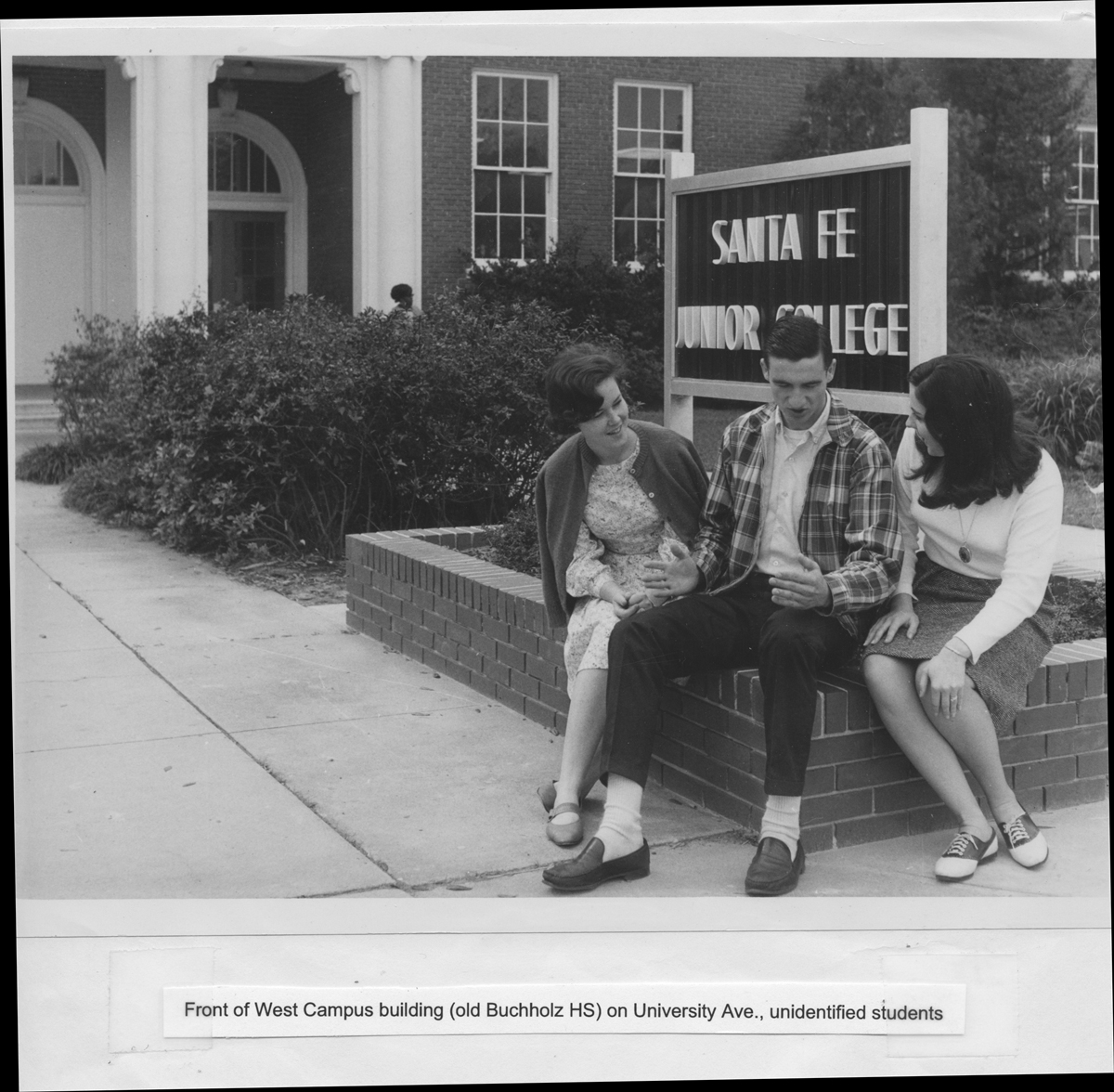 “Community” is no longer part of Santa Fe College’s name, but it is still at its heart.

The college opened as Santa Fe Junior College in 1966 during a period when 28 community colleges started across Florida, providing a campus within commuting distance of every potential student. Santa Fe College was tasked with serving Alachua and Bradford counties.

Over the 50 years of its history, Santa Fe College has risen in excellence, culminating with the Aspen Institute naming it No. 1 among community colleges nationwide in 2015.

The college has also grown, achieving an enrollment of 18,000 in for-credit courses and 12,000 in noncredit courses. The school’s name evolved to Santa Fe Community College in 1972 and dropped “community” in 2008 to emphasize that the college offers bachelor’s degrees in some fields.

Over the years, the college has stayed true to its guiding mission: making higher education accessible to everyone, said Ralph Cellon, who served on the committee that established the college and is still a member of the Santa Fe Foundation Board.

The college does that in two equally important ways: preparing students to transfer to four-year institutions and training the local workforce.

The programs that prepare students to transfer provide a stepping stone, Cellon said. “There is a need to serve people who aren’t able to pay to go to a four-year school right away or who don’t have a scholarship,” he said.

“Not everyone needs to be a doctor or lawyer or CEO,” he said. “We need firefighters, police officers and plumbers, too.”

Always at the Cutting Edge

Community leaders embraced Santa Fe College (SF) from the start. “We had a good county commission and a good school board,” Cellon said. “The University of Florida was supportive. Everybody was cooperative.”

Founding President Joseph W. Fordyce adopted an open-door policy, admitting every high school graduate who applied, with the motto of, “That all who will may learn.”

While SF enjoyed considerable support in the early days, there were skeptics, recalled Bennye Alligood, who entered as a student in 1967 and retired in 2014 as associate vice president for educational centers.

“When Santa Fe College was new, a lot of the locals said, ‘You’ll never make it,’” Alligood remembered. “I heard that from students, staff and faculty. People thought Santa Fe College was too close to the University of Florida and that we wouldn’t be able to attract enough students.”

The opposite proved true. “It spread by word of mouth that you could get smaller class sizes and get the same depth of education,” Alligood said.

The cornerstone of the college’s success has always been its student-centered philosophy, she added.

Alan Robertson was involved with Santa Fe College from the beginning. While he was a UF economics professor, he chaired the committee that established the college. He joined the staff as assistant to the president in 1968 and became executive vice president in 1969.

“He was a father figure and as personal at they come,” Alligood said. “He walked around and greeted everyone by name and asked about their family.”

At first, Santa Fe College focused mostly on being a junior college, preparing students to transfer to UF or another college or university. But, the college soon started to offer training that led to jobs, Alligood said.

“The community asked us to do what we could to help young people get jobs that pay well and to meet the need for skilled employees,” she said. “Whenever a need arose, we would zip into automatic and set up a program.”

The nursing training changed with the times, Filer said.

Santa Fe College led the nation in creating a zoo, which started in 1972, and the zoo remains the only one on a college campus in the nation.

Jack Brown, who joined the staff in 1974, helped founder Ray Giron establish the zoo at its current site on 10 acres on the college’s Northwest Campus in Gainesville.

Students came from all over the country for the college’s unique Zoo Animal Technology program.

The program was rigorous academically, and it also emphasized that zookeepers need to be personable. “You’re a lot more employable if you can answer kids’ questions,” Brown said. “As our fame grew, placing students became easy. I would get calls from zoo curators, saying ‘Hey, Jack, that student you sent me was great. Can you send me another?’”

Students have to do chores, including cleaning up animal waste, Brown said. “The curator from the Brookfield Zoo in Chicago told me that when he hired people with a bachelor’s in biology, they would quit in a month because they weren’t used to doing chores.”

The zoo received a donation of two adult guanacos (relatives of llamas) and their babies and five rheas (relatives of ostriches). The young guanacos were pregnant, and they each had one infant.

“We got six guanacos from the donation, and we bred them, which started our breeding program,” Brown said. “We’ve always sold the young animals we don’t need to reputable institutions, which helps support the zoo.”

In serving students, many of Santa Fe College’s programs have always offered dual tracks — one leading to entering the workforce quickly and one serving as a stepping stone to a higher degree.

That’s the case with the Construction and Technical Programs, said Fred Hart, who began teaching at Santa Fe College in the early 1980s and continues as an adjunct faculty member, although he’s officially retired.

The work-ready programs include one that trains students to become superintendents on construction jobs after two years of study, while other programs lead to jobs as technicians in fields including plumbing and air conditioning.

The two-year construction management program was third in the nation to be certified by the American Council for Construction Education. Local contractors have always been involved with the advisory council for the construction program.

“You’ve got to have industry with you in order to know what you’re teaching is what’s needed,” Hart said.

Larry Tyree followed Robertson, serving as president from 1990 to 2002.

“His theme was that we should jump on technology,” Alligood said. “He also believed in making a name for ourselves nationally, and we became well known.”

“Everyone had an opportunity for input on policies and procedures, including the faculty, students and the groundskeepers,” Alligood said.

Current President Jackson Sasser has made a big mark in continuing the college’s academic excellence and community involvement.

“He has a bit of all of his predecessors,” she said. “He puts both of his hands and both of his feet into everything he does.”

Sasser has a passion for extending Santa Fe College’s community outreach. One of the first things he did when he arrived was establish the East Gainesville Initiative, said Karen Cole-Smith, who has led that program from the beginning.

“We’re following his lead in raising expectations and giving people hope,” she said.

Provost Ed Bonahue takes pride in serving the underserved, people who wouldn’t be able to go to college without Santa Fe College’s help.

“We are in a rural part of the state where the income of many people is low and many of our students didn’t have the greatest experience in high school,” he said.

The college’s openness to people of diverse backgrounds makes for a rich campus experience, said Bonahue, who teaches a class when possible.

Through the program, advisers help students look at their life goals as well as select courses.

“The advisers are interested in a student’s family and financial or work commitments that may interfere with their studies,” Bonahue said. “We look for early warnings of problems such as not coming to class or doing poorly on quizzes,” Bonahue said. “Faculty inform advisers, who contact a student and say, ‘You’ve been missed.’”

Sasser sees candor as a sign of respect to students.

“The greatest gift we can give you is to be honest with you, showing we love you enough to expect the best from you,” he said.

It noted the following outcomes:

“Santa Fe College stands out for its exceptional work in keeping students on track to graduate with degrees that have incredible value after they graduate,” said Aspen Institute Executive Director Joshua Wyner at the awards ceremony.

“The results are clear: Santa Fe College graduates have one of the highest transfer and bachelor’s attainment rates in the country as well as strong employment and earnings outcomes,” he added.

Sasser is reflective about the Aspen honor.

A Focus on Values Led to Early Excellence

Joseph W. Fordyce, Santa Fe College’s founding president, was a visionary in higher education, determined to help students shape their values, said Terry O’Banion, who was his dean of students.

Fordyce and O’Banion developed an eight-point Santa Fe Commitment, which started with, “The student is the central focus for the process of learning,” and ended with, “Traditional concepts of education…are suspect and in need of careful trial and evaluation.”

The college advertised in the Community College Journal, with the requirement that applicants write an essay about how they had implemented the principles of the Santa Fe Commitment in their work.

“We received 1,000 applicants for our initial 40 positions,” O’Banion said. “Joe and I conducted all the interviews, working night and day. It was the best time of our lives.”

Fordyce created the initial general education program that included six courses required of all students. O’Banion and his team of counselors created the core course “The Individual in a Changing Environment,” which the other five courses were clustered around. The course focused students on asking key life questions, such as “Who am I?” and “What difference does it make?”

O’Banion and psychology teacher April O’Connell wrote the book based on the course, and more than 200 colleges adopted it for courses in personal development and communications.

Based on its growing reputation, Santa Fe College became one of the 12 founding members when the League for Innovation in the Community College was created in 1968.

“The college has had an impact far beyond Alachua and Bradford counties,” he said.