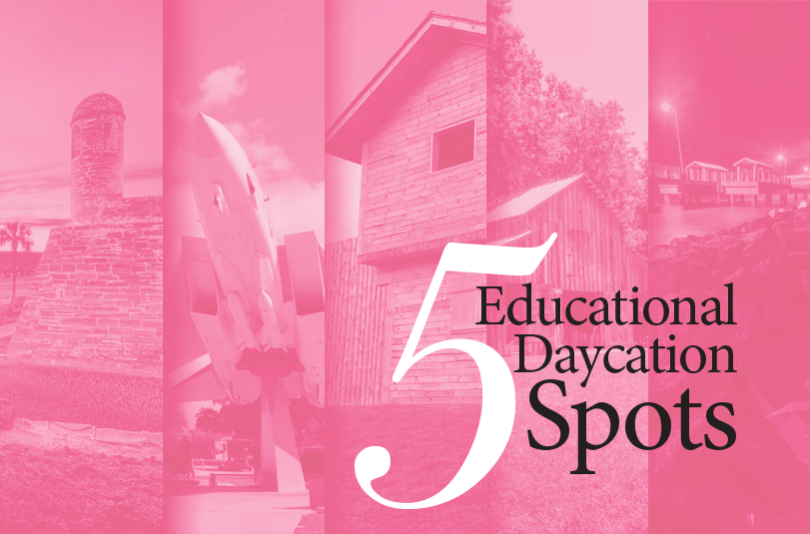 oftentimes, when Floridians think of fun places to take the family, Disney World or Universal Studios are the first to come to mind. Yet, amusement parks are not the only way to spend the day. From forts and museums to beaches and parks, children can experience a new kind of adventure – with educational value. Families can spend quality time together and learn more about the very state they live in, for a fraction of the price, and all within a few hour’s drive. 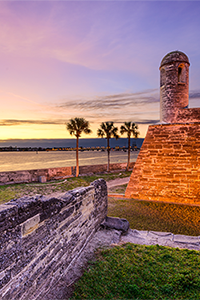 St. Augustine is well known for its rich history. In fact, it is the nation’s oldest continuously occupied city, which offers many opportunities for history lessons. The Castillo de San Marcos is the oldest masonry fort in the United States. At more than 300 years in age, the Castillo also stands as the oldest structure in St. Augustine, as well as the first permanent European settlement in the United States.

Delve into what life was like in this historic city. Walk around the fortress made of coquina – a soft limestone of broken shells – that once protected Spain’s claims in the New World. A $15 per adult admission fee (children 15 and under are free) grants access to a grand architectural experience with the ticket valid for seven consecutive days. Admission includes ranger-led tours of soldiers’ rooms, the courtyard and gun deck.

Children ages six to 12 are encouraged to join the Junior Ranger Program. After families experience the museum exhibits and listen to a ranger talk, children can work on their Junior Ranger Activity Book. When finished, young guests will receive a certificate of completion and a Junior Ranger badge.

Travel back to the 1700s with several presentations, including historic weapon demonstrations – cannons and all. You’ll encounter reenactors wearing period garb, ready to perform and speak of the lives of colonists that once inhabited the area. Everyone is encouraged to stroll around and enjoy the gun deck view that overlooks both the bay and downtown St. Augustine. Take a picture next to a cannon or of the waterfront. It is a relaxing end to a day’s walk through history. 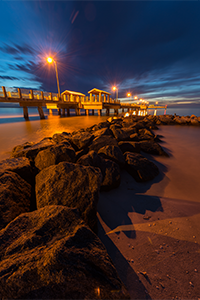 For the more outdoorsy family, St. Petersburg’s Fort De Soto is a great choice for basking in natural beauty. Ecosystems are a focal point of the park. Over 300 species of birds can be found throughout the area. Guided nature tours are offered to those wanting to explore and learn about the life on the island. With its seven-mile trail, beaches, campgrounds, picnic shelters, fishing piers and boat docks, there is no shortage of things to do.

On the beach, children can enjoy a pirate ship playground and tidal pools. A separate beach allows dogs to splash in the crystal clear water; they even have their own park to play in. Paddling or boating around the park’s perimeter gives guests a great view of the area.

Consisting of five interconnected islands, Fort De Soto is the largest park in Pinellas County, according to pinellascounty.org. It is no wonder that park attendance averages over 2.7 million visitors every year. Not only does the park offer a peaceful environment, but it also has a 19th-century fort. Fort De Soto overlooks its beautiful bay and the Sunshine Skyway Bridge that stretches over it. The fort is also equipped with mortar cannons, an artillery hold and firing galley. As you leave, make sure to check out the Quartermaster Museum, which includes historic documents, Spanish-American War artifacts and photos of the fort. Visitors can also rent a kayak or a bike and explore the island that is Fort De Soto. 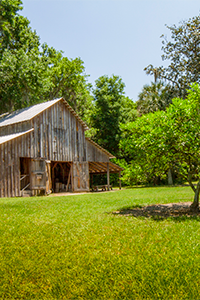 Cross Creek, located between Ocala and Gainesville, was home to Pulitzer Prize-winning author Marjorie Kinnan Rawlings. Her work, “The Yearling,” became a bestseller when released in 1938. Rawlings’ editor Maxwell Perkin (also editor of F. Scott Fitzgerald’s and Ernest Hemingway) continuously rejected her manuscripts until she followed his advice to write about the people and environment around her. Rawlings incorporated intricate details surrounding her own life in Central Florida, all the while writing it in her Cross Creek cottage. The book was so wildly popular that MGM bought the movie rights and insisted on filming it on-location in Central Florida.

People of all ages can enjoy the historic homestead and truly engage with the environment, especially if they’ve read the book.

Another of Rawlings’ novels, “Cross Creek,” delves into living in rural Florida. In both novels, Rawlings showcases her knowledge of the area, painting vivid pictures of the people and nature that made Cross Creek a mesmerizing place to reside.

Today, both the University of Florida and Florida State Parks work together to continue Rawlings’ legacy. Orange trees surround the property, furthering the authenticity of the Florida environment that inspired her. The 1930s home is kept in pristine condition, as it was when she lived there. Her typewriter rests on the quaint porch where she would often work. Everything is set in the 1930s – even the rangers that conduct guided tours wear period clothing. Hourly tours are $3 per adult and $2 for children ages six to 12, in addition to the $3 admission fee. Come visit the park and get a glimpse of a Pulitzer Prize winner’s inspiration. 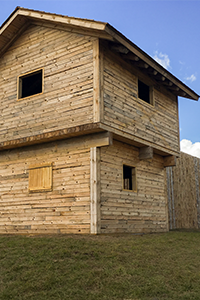 Located in less than an hour’s drive of Gainesville, the Fort King National Historic Landmark and Visitor Center provide both an environmental and historical lesson to all who visit – and it’s free.

Fort King was the command center during the Second Seminole War. Guests can now observe the fort and walk on the very land where King Osceola of the Seminole tribe took his defiant stand against the U.S. military.

While the most popular attraction for visitors is the fort itself, there are still a number of things to see. According to Division Head of Parks Bill Rodriguez, the edible plant hike has become a local favorite. With over 100 visitors in attendance, it is now being offered as a quarterly event.

“The site offers something for everybody,” Rodriguez said. “Whether you’re a history buff or nature lover, you get a little bit of both, which is quite unique.”

The area provides an immersive experience to all guests. Trails offer a secluded walk in the wild with no houses in sight of the 40-acre property. From cooking to broom making classes, demonstrations allow people to make crafts like it’s the 1800s. Guest speakers, including authors, historians and archaeologists, tell the history of the fort and of the Second Seminole War. The Visitor’s Center features approximately 200 artifacts that were found onsite.

“It offers an excellent educational opportunity to the kids in this area and the adults as well,” Rodriguez said.

If you’re around for the holidays, be sure to check out the seasonal events. In October, children can experience the Haunted Halloween Trail – a free and safe way to explore the trail and collect candy along the way. Yet, the biggest event is in December – its annual reenactment of Osceola’s attack on Fort King. For more information and future program schedules, visit the Fort King National Historic Landmark and Visitor’s Center Facebook page. 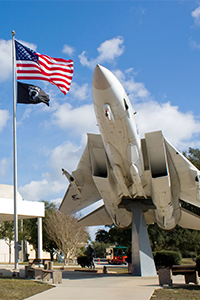 The National Naval Aviation Museum in Pensacola is the world’s largest naval aviation museum and home to over 150 restored aircrafts representing Navy, Marine Corps and Coast Guard Aviation. Guests are welcome to touch the planes and literally get a feel for the history.

Riannon Boven, the business development officer at the museum, finds that exhibits emphasize the people and events that shaped our history.

“Without all the people and all the stories, it would just be a box full of metal,” Boven said.

Visit the giant-screen theater that features four flight movies all day long. As if the attractions couldn’t be any more immersive, state-of-the-art flight simulators take you soaring through the air. The MaxFlight 360 Simulators mimic the combat and stunt flying of actual aviators. The HD Motion-Based Simulator incorporates visuals coupled with surround-sound and a moving capsule. The museum’s newest attraction, the Blue Angels 4D Experience, allows visitors to feel as though they are part of the United States Navy’s flight demonstration squadron, thanks to interactive seats, special effects and the combination of sight, sound and motion.

Take time to relax at the Cubi Bar Café. Not only does the café serve soups, salads, sandwiches and desserts during lunchtime, but it is also a museum exhibit. The café’s furniture and layout is a reproduction of its real-life counterpart, the Cubi Point Officers’ Club – which was a go-to spot for Navy and Marine Corps squadrons, ships and units as they passed into the Western Pacific. After your visit, head over to the Kiddie Hawk play area and let the children run wild.

Ultimately, the staff of the museum hopes to provide guests with an unforgettable experience.

“We want to share the stories of the heroes and heroines that our country was founded on and those who work really hard – [ordinary] people just like you and me,” Boven said.

They offer guided museum tours as well as a trolley view of the flight line. For families making a whole day out of the trip, the Pensacola Lighthouse and Museum is conveniently located right across the street. Built in 1859, the gulf’s oldest lighthouse offers climbing tours, local history exhibits (including Civil War history, U.S. Coast Guard history and maritime history) and local archaeology.