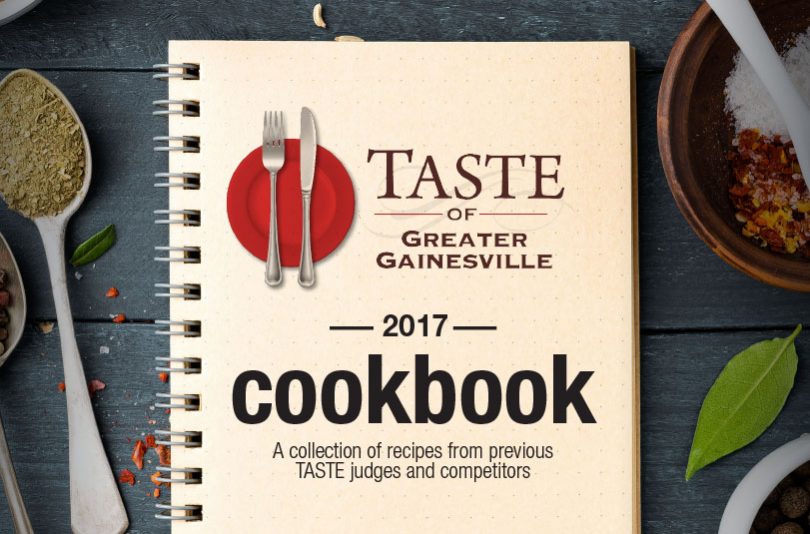 A Collection of Recipes from Previous TASTE Judges and Competitors

Every year, three local chefs and three celebrity judges meet at Taste of Greater Gainesville, a nonprofit event to raise money for children’s charities in North Central Florida. In preparation for the 2017 Taste of Greater Gainesville, we have collected recipes from previous Taste judges and participants. Each of these seven recipes uses one of the previous secret ingredients from Iron Chef Gainesville competitions — honey, coffee, bourbon, cinnamon, beer or blueberries.

To find out what the secret ingredient will be in the next Iron Chef Gainesville Competition, join us at the 8th Annual Taste of Greater Gainesville 2017 presented by Info Tech, Inc. on June 4 at the University of Florida Hilton on Southwest 34th Avenue. 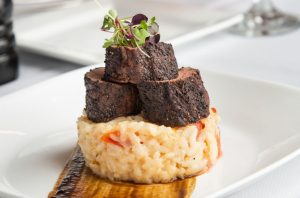 – 4 lamb loins, taken off the bone

For the Garlic Reduction:

Directions for the Lamb:

1. Season lamb with salt and pepper and then rub with coffee.

2. Sear lamb in hot pan with a little oil on all sides. Finish lamb in oven until desired temperature. Let rest before cutting.

1. Sauté the shallots in oil until translucent.

2. Add the rice. Stir for about 30 seconds. Add wine. Stir until wine is gone.

3. Add chicken stock one cup at a time, stirring constantly on medium heat until liquid is gone. 4. Repeat step three until all stock is gone. Rice should be tender. Season to taste with salt and pepper. Fold in butter, Parmesan and tomatoes.

For the Garlic Reduction:

2. Add honey and black garlic. Bring to a simmer. Blend well with a hand beurre mixer until smooth.

To plate the dish:

1. Using a silicon brush or spoon, put a line of the garlic reduction on the bottom of each plate, end to end.

Chef Charles Hahn is the executive sous chef at the Village in Gainesville. He was an Iron Chef Gainesville competitor in 2012 when the secret ingredient was coffee. He competed twice more as sous chef with Chef Frankie Harvey in 2015 and 2016. 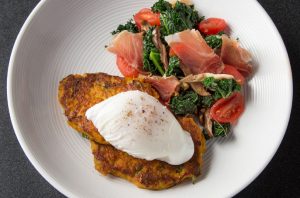 For the Sweet Potato Cakes:

For the Honey-Orange Vinaigrette:

For the Poached Egg:

1. Peel the sweet potato and grate on a cheese grater. Then, mix with egg, starch and baking powder, making a loose batter mixture. Shallow fry in a pan and turn once brown. Let cook 4 minutes in total.

2. To make the salad, lightly fry the prosciutto to make it crispy and then put it aside. Pan-fry the shiitake until lightly golden, and fry the kale until soft. Toss all ingredients together and dress with the honey-orange vinaigrette.

3. To make the vinaigrette, toss all ingredients together and mix vigorously.

4. To poach the eggs, bring water to a boil in a small pot and add 1 tbsp. vinegar (this helps bind the egg white together). Once the water is boiling, lower the temperature to simmer. Stir water in a circle and add one egg. Let the egg cook for 4-5 minutes, and then pull it out and repeat with the other egg.

Chef Steve Grimes, 2016 Iron Chef Gainesville Champion, is the executive chef at Crane Ramen in downtown Gainesville. Over the course of his 13-year career, Grimes has worked at restaurants across the US, Asia and the Caribbean. His cooking foundation is Asian style with a focus on Japanese techniques. He resides in Gainesville with his wife and young daughter. 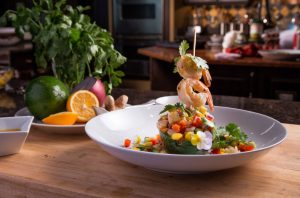 This is the perfect choice for when you want something light and refreshing for a beautiful, warm spring day or hot summer night. Pour something chilled and enjoy the fact that there is no cooking involved. Optional additions or substitutions for the filling are jicama, papaya, grilled corn, habanero/scotch bonnet or a variety of colorful bell peppers.

– 4-5 tbsp. coconut rum, or other liquor of your choice

1. Make the sauce mixture; place sauce ingredients into bowl and whisk together well. Taste and adjust to your preference. Keep cold until using and set aside.

2. Skewer two whole shrimp on each of the four skewers and keep cold.

3. Remove and discard tails from shrimp, and then cut into small pieces. After prepping all ingredients, except avocados, place into a large bowl with the shrimp. Toss gently. Keep cold.

4. Cut avocados in half lengthwise and remove the pit. Slice a small piece off the cheek of the avocado, so that it sits flat on your plate. Score the inside of the avocados and drizzle with lime juice, sesame oil and salt.

5. When ready to serve, mix the sauce with the shrimp medley. Season with salt. Fill each half of an avocado with generous spoonfuls of mixture to overflowing. Place skewered shrimp securely in the avocado. Season with drizzles of sesame oil, sesame seeds and fresh cilantro leaves. Drizzle extra sauce around plates. Serve with extra lime wedges. 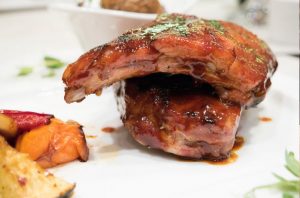 This is a great way to add a spicy kick to spare or baby back ribs. The splash of Applejack brandy adds just a little tang to the end result but can be left out if you don’t want to use alcohol.

– 10 cloves of garlic (peeled and crushed with a knife)

1. Heat half the vegetable oil in a thick-bottomed frying pan.

2. Dust the ribs with the all-purpose flour and brown them in the pan on a high heat until they are beautiful and golden in color.

3. Remove the ribs from the pan. Then, in the same pan, add the rest of the vegetable oil. Reduce the heat to medium, and add the garlic, ginger, red pepper flakes, star anise and peppercorns.

4. Cook for 2 minutes, and then add half the Applejack brandy and all of the soy sauce, sesame oil, rice wine vinegar and chicken stock.

6. Layer the bottom of a large ovenproof dish (you may have to do this in two dishes, so split the braising liquid evenly between them) with slices of onion and lemon.

7. Crush the lemongrass stalk and add to the oven dish.

8. Lay the ribs on top of the onions and lemon.

9. Pour over the braising liquid and all its contents over the ribs. Remember, this is braising, not stewing, so the liquid should only be about halfway up the ribs.

10. Cover the oven dish securely with two layers of foil (you don’t want any steam to escape), and place in an oven preheated to 325 degrees Fahrenheit.

11. Allow to cook for 90 minutes.12. After 90 minutes, remove the ribs from the pan and place on a baking tray.13. Strain the contents of the oven dish and place the liquid in a saucepan.

14. Add the remaining half of the Applejack.

15. Reduce the liquid on a gentle heat until it is a thick, almost syrupy consistency. Then, add the honey to the liquid.

Simon Majumdar is a world-renowned broadcaster and author who has dedicated the second half of his time on this planet to fulfill his ambition to “Go Everywhere. Eat Everything.” He has written three books: “Eat My Globe” (2009), “Eating For Britain” (2011) and his latest book, “Fed, White, and Blue,” which catalogs his journey to American citizenship. Simon was a celebrity judge at Taste of Gainesville in 2014 and 2015. 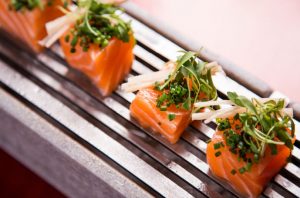 1. Trim the salmon of fat and discard dark flesh.

2. Combine honey, ginger and salt in a bowl, and stir to break up clumps. Cut a piece of foil slightly longer than the fillet. Sprinkle half of the marinade down the center of the foil and spread it into the shape of the fillet. Place the fillet on it, and sprinkle the remaining marinade over the fish. Wrap fish in foil and place between two baking sheets with a light weight on the top sheet. Refrigerate for 3 hours.

3. Remove the fish from the foil, and then rinse and dry the fish thoroughly. Cut crosswise into eight pieces about 3 inches by 1 inch wide. Let stand at room temperature for 30 minutes.

4. Place enough olive oil in the pan to fully cover the fish. Heat oil to 110 degrees Fahrenheit. Cook the fish for 10 minutes. Drain on paper towels.

5. Garnish with fresh slices of ginger, chives and local micro greens, and listo!

Chef Valero Alises menendez is the executive chef at Saboré. He competed in Iron Chef Gainesville in both 2015 and 2014 and was the 2014 champion. His favorite cuisine is rooted in Spanish culture, but creativity with seafood ingredients is his specialty. 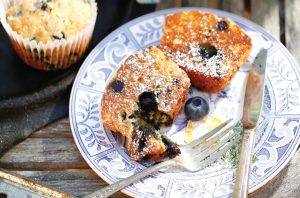 While at home in Poplarville, Mississippi — known as the Blueberry Capital of the state — I love to serve my family and guests homemade blueberry muffins made with fruit from the blueberry bushes lining our driveway. First, I make the muffins, and then I slice and griddle them on an iron skillet. This cooking technique takes the muffins from a breakfast or brunch food and elevates them to dessert.

2. In a medium microwave-safe bowl, melt four tablespoons of the butter in the microwave and let cool slightly.

3. In a separate bowl, stir together the flour, salt, baking powder and baking soda.

4. Add the lemon zest, sugar, buttermilk, milk, egg, honey and vanilla to the slightly cooled butter, and whisk until combined. Using a rubber spatula, fold in half of the flour mixture. Do not overmix.

6. Divide the batter evenly into the muffin cups. Top each with the coarse sugar sprinkles, if preferred.

7. Bake the muffins for 18 to 22 minutes, until lightly browned. Let them cool for about 15 minutes. Cut the muffins in half.

8. Grease a cast-iron griddle with the remaining tablespoon of butter and heat over medium-high heat. Working in batches, place the muffin halves on the griddle, and cook until toasted and browned, about 30 seconds to 1 minute.

9. Serve immediately with butter and a sprinkling of powdered sugar (as preferred.)

Chef Whitney Miller was a judge at Taste of Gainesville in 2016. At 22 she won the show “Masterchef” and became Fox Network’s first U.S. Masterchef. She is a professional recipe developer and the author of the cookbook “Modern Hospitality: Simple Recipes with Southern Charm,” with a foreword by Gordon Ramsay. Most recently, she released “Whitney Miller’s New Southern Table.” 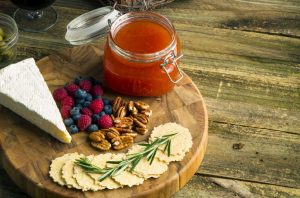 Serve as an accompaniment on a cheese or charcuterie platter.

1. Bring grapefruit and 1 cup water to a boil in a medium saucepan, mashing lightly with a potato masher.

2. Add sugar and lemon juice and bring to a boil, stirring constantly. Cook, stirring, for about 15-20 minutes until mixture is thick.

Chef Christy Angerhofer has worked as a chef for The Kentucky Derby, Nasdaq Tennis Tournament in Key Biscayne, Belmont Stakes, and also was on the NASCAR circuit for a whole season. She began working for North Florida Regional Hospital in 2009 and is currently the executive chef there. She was a competitor in the 2016 Iron Chef Gainesville.