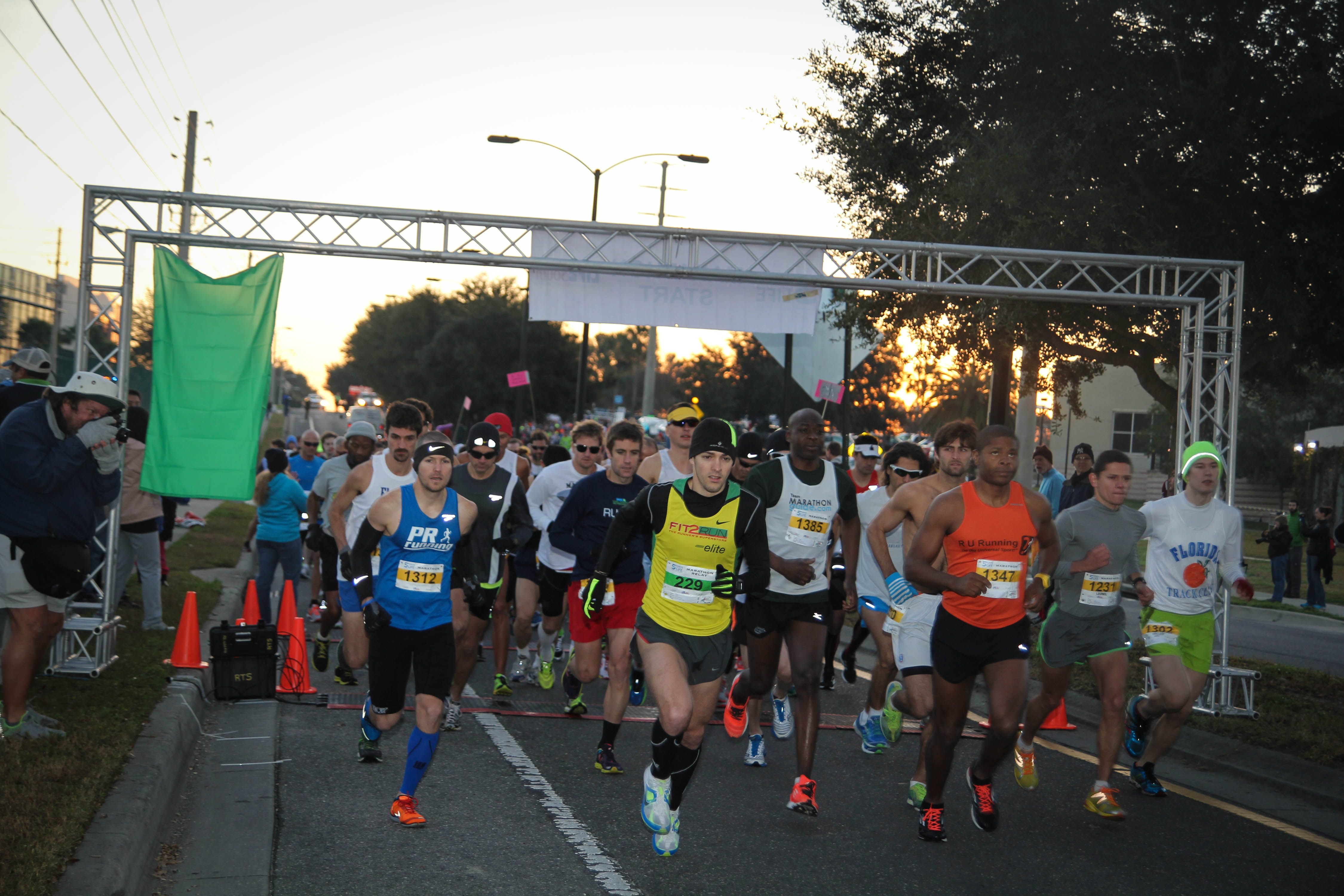 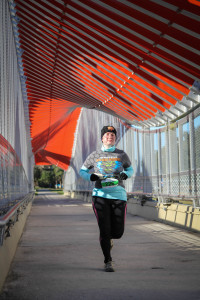 LifeSouth President and CEO Nancy Eckert remembers that when she first started talking about hosting a marathon to promote the Five Points of Life in Gainesville, the reaction wasn’t exactly what she expected.

“It’s not possible. Gainesville is too small. It’s been tried before and didn’t succeed,” was all part of the litany of advice she received.

Still, LifeSouth and a host of supporters in the community decided to give it a try. Now, in the dim pre-dawn of a winter Sunday on February 15, 2015, Eckert will get to see the tenth-anniversary edition of the impossible go surging down Hull Road for a 26.2-mile route that shows off the very best of Gainesville. It’s a sight that still moves her.

Eckert, who is a long-time recreational runner, said the idea was first broached while sipping coffee at a local coffee shop after a run. She credits Karen Rhodenizer, formerly of LifeSouth and now communications director at the University of Florida College of Dentistry, with being the spark plug for the race.

“She had a passion for running and got me to run a marathon,” Eckert said.

Organizing a marathon requires a huge amount of work as well as the cooperation of law enforcement, the Gainesville Sports Commission, the chamber, the university, the Florida Track Club, UF Health’s Orthopaedics and Sports Medicine Institute and more. And never in all of its years has it been a cash cow.

“It’s not a money maker. We’re giving back to the community,” Eckert said. “It’s illogical for us to have done this and the benefits are hard to measure, but I’m glad we did it.”

The challenges were many. Designing a course and getting it certified so that it could serve as a Boston Marathon qualifier was one of them. Eckert’s husband, Jim Eckert, volunteered for that job nine years ago and still serves as the course marshal, who must recertify the course anytime a road closing or construction project means tweaking the route.

Eckert said the biggest surprise and challenge that first year was what she calls “coneology” — getting miles of lanes of city streets blocked to vehicles with traffic cones. The crew begins in the dark hours before the race and then quickly transitions to the job of picking up their work behind the runners.

Mark Ou and Steven Lachnicht are two local runners who have run all nine previous marathons and plan to be there to celebrate the tenth.

Lachnicht says he tries to support all local races, but the Five Points one is special.

“I think it’s a great local event,” he said. “I’d be delighted to see more people embrace it.”

The course goes right under his third-floor office window that overlooks the corner of South Main Street and Southwest 2nd Avenue, and the backstretch of the course on Williston Road passes within a couple blocks of his home.

“It’s always tempting to take that option at the 20-mile-mark, but I haven’t done it yet,” he said.

Back in 2000, Ou said, he was turning 30 and thought he would take up running to stay in shape. Now, he has many marathons under his shoes, including the Boston Marathon. When the idea for the Five Points of Life Marathon was first proposed, he was immediately on board.

“I’d always been a blood donor. It was a good cause and was good for the community,” said Ou, who grew up in Gainesville.

After the first year with the marathon and half marathon, the Five Points of Life Kids Marathon was added in 2007, and the event was expanded to two days with the addition of the 5Points 5K in 2008. The Kids Marathon participants run or walk 25 miles prior to the event, logging their distance as they go, and then run or walk the final 1.2 miles on Saturday morning to complete the marathon distance. The format proved so popular that Five Points of Life expanded it to 11 additional cities in Florida, Georgia and Alabama that are also served by LifeSouth.

“It amazes me how many of the kids are now doing the 5K,” Eckert said.

“This year, we’re expecting about 2,400 runners over the two days,” said Five Points of Life Foundation Director Brite Whitaker. “When you add in the army of volunteers it takes to make it happen, you get a feel for just how big this event has become.”

The race weekend and its variety of distances help fortify Gainesville’s reputation as a runner’s city. The race’s setting in town and around campus is another strong pull for UF alumni, said Scott Ludwig, a Gator grad who now lives south of Atlanta but has made the five-hour trip back every year to run the Five Points of Life Marathon.

While his daytime job is operations manager for the parts warehouse for Porsche automobiles, Ludwig’s passion is running. He’s written six books on running, including one called “Distance Memories: Reflections of a Life on the Run,” which includes a chapter called “Gainesville.” He now has a 36-year streak of running every day, and he recorded his 125,000th mile of running in November 2011 by crossing the 50-yard line in The Swamp.

For Ludwig, it all started when he was a grad student at UF and his professors encouraged him to try running. The 2014 Five Points event was his 202nd marathon. His first marathon in 1979 was also in Gainesville, and he recalled the advice he got that morning from legendary running coach Roy Benson, who was standing near the start.

“He said, ‘Don’t run marathons.’ That was literally five minutes before the gun went off,” Ludwig said with a laugh.

And while he loves running marathons, a marathon in Gainesville is special.

“My wife and I would look for any reason to come to Gainesville,” he said, referring to the city as the Eugene, Oregon, of the east. “I just like to show off Gainesville. I bring my friends down all the time, just for the race.”

And there is one other unique aspect: the racecourse goes right through Ben Hill Griffin Stadium. As the jumbo screen booms out Gator highlights, it’s more than the sights that make it memorable.

Ludwig agreed that the race weekend fortifies Gainesville’s reputation as a runner’s town, a title that dates back to when Frank Shorter trained in town for his marathon gold medal-winning performance in the 1972 Olympics.

“A lot of Olympians have trained up and down 16th Avenue,” Ou said.

Five Points has grown but has yet to become one of the mega-marathons, and that is part of its appeal.

“It has a more personal feel to it. Run a marathon in New York or Chicago, you’re more of a number,” Ludwig said.

Eckert said one of the benefits for LifeSouth is the large number of strong ties it builds with the many different organizations that come together to make the race possible. There is also an unexpected plus.

“We as an organization became more health conscious and fitness conscious. It’s become part of the culture of LifeSouth,” she said.

And if there were any doubts nine years ago, every race day brings hundreds of comments reinforcing the decision to tackle the impossible.

“We always hear how well run it is. We have staff that all truly care about the runners,” Eckert said.

Where: The starting lines are on Hull Road, near the University of Florida Cultural Plaza.

Five Points of Life Marathon, Half Marathon and Marathon Relay start at 7 a.m.

For information or to register go to: www.fivepointsoflife.org

Five Points of Life By the Numbers

45 – portalets on the course